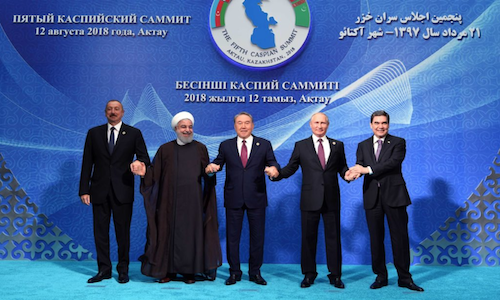 BACKGROUND: Over a year after the signing of the Caspian Convention, little or nothing has happened. While the BRI steadily advances, it has encountered a great deal of local and foreign criticism. Many analysts and officials are warning that participants and recipients of Chinese largesse might fall into debt traps and ensuing dependency on China. Russia’s North-South project and associated smaller ones still remain largely on the drawing board. Regarding energy projects, no realistic prospect currently exists for the so-called Southern Gas Corridor to Europe (SGC) or Trans-Caspian pipeline. Turkmenistan, which is essential to any important gas project, has agreed with Russia to transmit gas through Russian pipelines.

Moreover, the Caspian convention did not break the impasse concerning pipeline prospects since Russia and other littoral states retain veto power over projects going through the middle of the Caspian. Indeed, it is by no means clear that Azerbaijan will agree to facilitate transit for Turkmen or Kazakh gas at the expense of its own sizable holdings. Meanwhile, Russia will obstruct any trans-Caspian pipeline or infrastructure that could be subsumed under the rubric of the SGC. While Turkmenistan is reportedly actually working on the TAPI pipeline, which will carry gas from its fields through Afghanistan to Pakistan and India, completion is years away while Pakistan and India need gas now and could soon face major crises stemming from insufficient supplies. Finally Iran’s economic stagnation and current crisis preclude it from playing a leading or facilitating role regarding trans-Caspian projects.

This failure comes at the expense of the many projects that were bruited about after completion of the Caspian convention in 2018. For example, India’s ONGC Company began to examine how to expand business with Azerbaijan’s Azeri-Chirag-Gunashli (ACG) oil and gas project. Naturally the Caspian became an immediate candidate for bringing that oil or gas to Iran and then to the Gulf or overland to India. China’s mounting interest and investments in the Caucasus also reflect the fact that it is now considerably easier to traverse the Caspian to the Caucasus and then to Europe where China is also building a network of investments and ports. Indeed, China’s discussions and projects with governments of the South Caucasus increased substantially, building upon both sides’ mutual interests, even before the Caspian Convention was ratified.

Russia has also shown a revived interest in the North-South Corridor to Iran and India, which apparently has reemerged as a Russian foreign policy priority, along with other projects like the Caspian-Black Sea Canal, seeking support from other littoral states in the wake of the Convention. Moscow is simultaneously pursuing an integrated vision of the North-South corridor and East-West hydrocarbon transfers in preparation for an August 2019 conference on this topic in Turkmenistan.

India features prominently in these discussions since it is the natural terminus for a North-South corridor that would stand apart from China’s BRI. Russia has had to settle for a subsidiary role in the BRI, even though China is clearly loath to share the BRI’s benefits with Russia to any meaningful degree.

Turkmenistan’s resumption of gas exports to Russia also arguably strengthens Russia’s hand. Russia can use Turkmen and other Central Asian gas exports, e.g. from Uzbekistan and Kazakhstan, as drivers for completion of what amounts to at least a North-South energy corridor in the near future with the larger overall commercial project to come later. However, for that to happen rather than for Turkmen gas to subsidize Russian domestic consumption as was the case before 2008, Russia must make progress on actually building this corridor, or project, or pipeline to India.

IMPLICATIONS: While these projects look to Asia, opportunities for tying Caspian producers to European markets have also been revivified. BRI, which preceded the Caspian Convention, clearly also enhances possibilities for increased connectivity to Europe. Since the 1990s, Western officials and energy companies have striven to find a commercially and politically viable basis for bringing Caspian hydrocarbons to Europe through the Baku-Ceyhan oil pipeline, the Nabucco project, and more recently the TANAP-TAP pipeline. Meanwhile, the search for a genuinely trans-Caspian Gas pipeline or corridor has continued for years.

The Caspian convention has also regenerated these discussions. On March 4, 2019 in Bucharest, the Foreign Ministers of Azerbaijan, Georgia, Romania, and Turkmenistan adopted a statement invoking their partnership to build an international transport route from the Caspian to the Black Sea. From there, the products transported along this route would then go to the EU’s members. Ideally, this protocol links up the port facilities of each country; Costanza in Romania, Poti in Georgia, Baku in Azerbaijan, and Turkmenbashi in Turkmenistan to bring cargoes from the Caspian to the Black Sea and beyond. The concurrent major port project of Anaklia in Georgia may also come to play a major role in any future project along these lines.

Yet by far the most intriguing possibility is Russia’s steadily growing receptiveness to the Sino-Kazakh proposal (dating back in Kazakhstan’s case to 2007) to build the aforementioned Caspian-Black Sea canal that would bypass the Volga-Don Canal, a showpiece of Stalin’s Gulag. While it might have economic advantages in going straight from the Caspian to the Black Sea, this project would cost at least US$ 10 billion and its environmental consequences will likely be quite negative. Nevertheless, it possesses an unmistakable allure to Putin’s government, which remains entranced by the idea of grandiose public works and infrastructure projects. However, this project has an added, and probably even more attractive political subtext. Given the fighting in the Sea of Azov in November 2018 with Ukraine, Moscow likely wants to create a fait accompli, take over that sea entirely, and annex it to Russia as part of the intended construction of the new Caspian-Black Sea canal, thereby creating a strangling effect on Ukraine’s economy and thwarting the aforementioned four-party Bucharest project.

Iran also wants to build a canal or waterway from its Caspian shore to the Persian Gulf. The economic benefits of this project, assuming it is ever completed, are obvious. However, Iran is in no position even to contemplate this project seriously.  And while Russian media claims that Iran will need Russian help to realize this dream and thereby strengthen prospects for the North-South corridor, Russia probably can do little to advance this project given its own problems.

For now, all these projects remain visions of the future. Planners and policymakers will have to overcome multiple political obstacles and ensure ways to make these large-scale international projects commercially and environmentally viable. Thus, they are newly energized visions of what can and might be thanks to trends like the BRI and the Caspian Convention. It will take sustained years of multilateral economic, technological, and political efforts to implement these visions. For example, it took four-five years to bring about the Baku-Ceyhan pipeline, and over twenty years to realize the TAPI pipeline from Turkmenistan to India through Afghanistan and Pakistan. Without a shared large-scale vision nothing significant can be accomplished.

CONCLUSIONS: While the increasing interest of Central Asian states in regional cooperation is a welcome sign, it will take much more than that to realize these grandiose projects and facilitate a much greater degree of Eurasian connectivity. In its new Central Asian strategy, the EU also expresses support for projects fostering this greater connectivity between Central Asia and Europe, yet there is no sign of the resources or the political will to realize its visions. Certainly Russia, despite its grandiose projects (see CACI Analyst 06/22/19), cannot afford them and will seek to subordinate the other littoral states to its interests. The BRI also appears to be encountering much stronger headwinds than China had expected even if it is moving forward. Ultimately, it is unlikely that the littoral states will significantly subordinate their own aspirations to Russia or contribute much to the success of Russia’s multiple projects. Obviously, neither can Iran do much to animate the vision of a North-South Corridor. Thus, it seems that despite the optimistic dreams fostered by the Caspian convention, there will be many disappointments on the road to realizing them in the foreseeable future.

Stephen Blank is a former senior fellow at the American Foreign Policy Council and MacArthur Fellow at the US Army War College.

More in this category: « New Wave of Anti-Government Protests in Georgia Kazakh Anti-Chinese Protests and the Issue of Xinjiang Detention Camps »
back to top