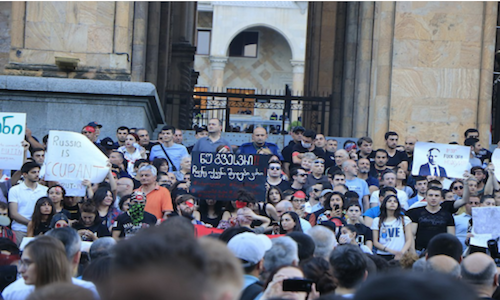 BACKGROUND: Under public pressure, GD decided in June to introduce a fully proportional electoral system ahead of the upcoming parliamentary elections and scrap the electoral threshold altogether amid large-scale rallies triggered by the visit of a Russian delegation to Georgia’s parliament (see CACI Analyst 19/09/16). The ruling party agreed to change the electoral system through another constitutional amendment, which currently envisages that a fully proportional electoral system will be in force only in 2024. Thus, according to the existing law, the 2020 elections will be the last to be held in a mixed system (proportional and majoritarian), prescribing that out of 150 parliamentary seats, 73 MPs are elected in single-mandate majoritarian constituencies and the remaining 77 through party lists. Critics of the current voting system say that it does not reflect voters’ real political preferences and gives an unfair advantage to the ruling party by reducing the number of seats that would otherwise go to smaller parties. A proportional voting system has strong public support in Georgia. According to an opinion poll prepared by the International Republican Institute, carried out after the June 20 protests and released in November, 78 percent of Georgians were in favor of holding elections using the proportional voting system. Additionally, in early August, the ruling party announced its new package for electoral reform which adheres to OSCE recommendations and aims to regulate electoral campaign financing and rules for political advertisement in the media.

Despite solemn promises made to the Georgian public and Georgia’s Western partners, the much expected overhaul of the electoral system eventually did not happen. On November 14, the ruling party failed to pass the constitutional amendment required to change the electoral system from mixed to proportional starting from 2020 instead of 2024. Despite being supported by 44 opposition MPs, the constitutional amendment did not pass the first hearing, since it only received 101 of the required 113 votes. This gave the general impression that GD purposefully downvoted the amendment despite holding a constitutional majority. Critics say that the party leaders backtracked on the amendment at the last moment out of fear that GD would lose its majority in the 2020 parliamentary elections.

GD heavyweights expressed their disappointment in the parliament’s decision and said that electoral system change was a issue of discord among the GD deputies. Therefore, the party could not mobilize a sufficient number of MPs to vote for the amendment. Tbilisi Mayor and GD Secretary General Kakha Kaladze said that parliament will not debate changing the electoral system again, however, GD is ready to refrain from running its candidates in majoritarian districts where the opposition has a chance to win, with the exception of candidates nominated by United National Movement and European Georgia.

IMPLICATIONS: The voting failure triggered a crisis within the parliamentary majority. Soon after parliament voted down the electoral amendment, several top lawmakers from the ruling party decided to quit the parliamentary majority, including First Deputy Speaker Tamar Chugoshvili, the Chairperson of the Committee on European Integration Tamar Khulordava, and the Chairperson of the Foreign Relations Committee Sofio Katsarava. For the same reason, three deputies from GD’s conservative faction also decided to leave and strongly criticized the parliament’s failure to amend the electoral system. The backtracking on electoral reform also caused renewed protests. Two rallies organized by opposition politicians and activists from different sides of the political spectrum took place on November 17 in front of Georgia’s parliament building in Tbilisi. The protesters blocked entrances to the parliament building and demanded to hold snap elections with a proportional system and the admission of a provisional government. Demonstrators again gathered in front of the parliament building on November 25 and tried to block the building, whereby police intervened resulting in 28 detained and three wounded. Opposition MPs staged their own protest in the parliament’s main hall by boycotting plenary sessions.

GD’s backtracking from the anticipated electoral reform caused concerned reactions from Georgia’s Western partners. The U.S. embassy in Georgia expressed disappointment that electoral reform did not pass through the parliament. Federica Mogherini, the EU’s High Representative for Foreign Affairs and Security Policy publicly expressed concern over the setback in introducing important reforms in Georgia. To make the message even clearer, the U.S embassy in Tbilisi and the EU Delegation to Georgia released a joint statement on November 17 in which they expressed their understanding of the public disappointment in the failure to pass electoral reform and their hope that trust can be restored by reaching a consensus between the government, opposition and civil society.

Despite promises, the ruling party has so far not met any demands of the opposition, put forward during the June and November demonstrations. Observers point out that the party misled the public and Georgia’s international partners, since GD leaders would surely have been able to keep the voting discipline among their MPs if passing the amendment had been important to them.

GD leader Bidzina Ivanishvili and his close associates seem to be entering a confrontational mode not only with the opposition but with large parts of the Georgian public, which will inevitably reverberate in relations with the U.S. and EU. In the past few years, the GD government has been criticized by international partners and organizations for backsliding on the rule of law and democracy. The recent debacle over electoral reform will further contribute to the rising mistrust between Georgia’s government and the country’s Western partners. Whereas Georgians can justifiably be disappointed in the West for keeping the country away from membership in NATO and the EU, Western support remains crucial for Georgia’s economy and security. Military concerns remain valid given Russia’s continuous pressure on Georgia. In mid-November and early December, another two Georgian citizens were illegally detained by South Ossetian security forces and placed in pre-trial custody for alleged administrative offences. Moreover, major Russian media outlets report that Moscow considers prolonging the so-called flight ban, which it imposed on Georgia in July this year following the parliamentary scandal involving Russian deputies and subsequent protests by Georgians, until the first half of 2020 due to the current political upheaval in Georgia.

CONCLUSIONS: The current political upheaval comes at a time when backsliding on democratic rule in Georgia has been noticeable for some time. However, the ruling party gears up for elections not by improving democratic standards but by mobilizing its own, most loyal resources. And indeed, some recent moves, such as appointing Ivanishvili’s close associate Giorgi Gahkaria as Prime Minister, has fueled its confrontation with the opposition and many ordinary citizens. The opposition accuses Gakharia, a former Minister of Interior, of orchestrating the brutal crackdown on the June protests where hundreds of demonstrators were detained and wounded by the police. Likewise, backtracking on the electoral amendment caused many liberal, Western-oriented MPs to leave the GD faction in parliament. Other questionable practices of the ruling party, such as the crackdown on opposition politicians and activists, taint Georgia’s image as a democratic country aspiring to join NATO and the EU. GD might win a third consecutive term next year but this will come at the cost of tarnishing Georgia’s image in the West and raising political tensions in the already polarized country.

More in this category: « New Strategy, Old Game: The Realigning Geopolitics of Central Asia New Vistas for Trans-Caspian Projects »
back to top