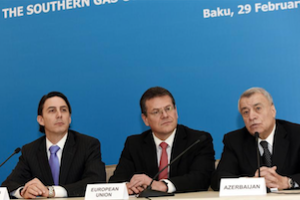 BACKGROUND: Despite prolonged turmoil in energy markets due to the fall in oil prices, Brussels has reiterated its support for the Southern Gas Corridor (SGC), intended to reduce the Union’s dependence on Russian gas. The participants in the SGC meeting in February called the scheme a strategic project and praised the beginning of its practical implementation. At a later conference in Brussels on EU energy cooperation with its eastern neighbors and Central Asia, the European Commission’s Vice-President responsible for the Energy Union, Maros Sefcovic, expected “significant progress this year” with the Southern Gas Corridor, a pipeline chain of 3,500 kilometers with an estimated cost of US$ 45 billion.

The EU has made a diversified gas supply strategy a key priority. Currently, Europe imports about 400 bcm of gas per year. Russia remains Europe’s main supplier of natural gas, providing 40 percent of all Union imports. According to Brussels, the EU’s overall demand projected for 2030 will remain more or less the same as today, and will amount to 380-450 bcm per year.

The SGC was designed to connect the EU’s energy market to new sources of gas in the Caspian region, the Middle East, and the East Mediterranean over the long term. As one of the EU’s priority energy projects, at a cost of about US$ 45 billion, it needs to provide up to 20 percent of the EU’s gas needs (or 60 bcm per year) to be economically and politically viable.

The project concept calls for the first gas supplies via SGC to come from Azerbaijan’s gas condensate field Shah-Deniz 2 (SD2) and reach Greece and Italy in 2020. SD2 would connect to EU markets via three pipeline projects: the expanded South Caucasus pipeline (SCP), the trans-Anatolian pipeline (TANAP), and the trans-Adriatic pipeline (TAP). SCP currently carries 8-9 bcm of gas per year from Azerbaijan’s Shah-Deniz Stage 1 (SD1) to the Turkish market. It needs to be expanded to accommodate SD2 production, which is expected to peak at 16 bcm per year. With 6 bcm delivered to Turkish domestic consumers, only 10 bcm per year would be left for the European market.

Brussels has stated several times that a Trans-Caspian pipeline (TCP) can be built to supplement these flows at a later stage with Turkmen gas. Brussels continues to treat TCP as an important component of SGC; it could potentially provide 30 bcm of Turkmen gas per year, half of the Southern Corridor’s projected capacity.

Plans for TCP, stretching 200 kilometers across the Caspian seabed, have been under discussion since the late 1990s. Technically, it should not be a costly undertaking, but politics have provided a much bigger impediment. Unresolved legal disputes on the Caspian’s status among its littoral states, plus outright opposition to the idea from Russia and Iran, have blocked construction. While Brussels (and Ankara) have sought to broker an agreement between Baku and Ashgabat to move the project forward, neither Russia nor Iran want to give way to competitors.

IMPLICATIONS: Securing the gas supplies necessary for a full-scale implementation of the scheme is a crucial issue. SD2 gas will not suffice to justify the corridor. Azerbaijani officials recently asserted that their country can produce more gas from other fields and expand its export capacity, allowing it to play an even stronger role in the scheme. During the February Ministerial meeting, Baku declared that Azerbaijan’s gas reserves alone are sufficient to fill SGC. But this statement is questionable, especially in terms of scale and time of implementation. Even if Azerbaijan has enough reserves it will hardly be able to develop them quickly enough to fully supply SGC. In the current energy market, with many international producers scaling back investment considerably, it will be difficult to attract funding for expensive deep offshore gas fields in the Caspian Sea.

In the short to medium term, only Turkmenistan has enough gas and capacity to fill SGC. Last May, Turkmenistan, Azerbaijan, Turkey and the EU made a new effort to push ahead with full-scale implementation of the project. In Ashgabat, the parties signed a declaration on further cooperation on gas and agreed to prepare a draft legal Framework Agreement on natural gas supply from Turkmenistan to Europe. A Working Group at the level of Deputy Ministers has begun working on organizational, legal, commercial, technical and other issues, related specifically to Turkmen gas supplies to Europe. Yet no details about this initiative have been reported, leading to speculations that this is just another bureaucratic move.

Recently, the EU’s energy chief Sefcovic said that Brussels’ priority is a timely and full-scale implementation of SGC. He downplayed the possibility of using Iranian gas in SGC, an option discussed last year, but stressed that Brussels together with Baku, Ashgabat and Ankara has been eyeing the possibility of bringing Turkmen gas into Europe. Sefcovic said that during the meeting of the Turkmen gas Working Group in Istanbul this February, “two options of how Turkmen gas could be supplied to Europe were put on the table and these possibilities will have to be assessed by all governments.” However, he did not provide details on options or clarify whether the governments of all Caspian littoral states or only signatories of the Ashgabat declaration would assess these options. Last year, Sefcovic brought up an Iranian option, along with TCP, saying that the easing of relations with Iran might allow the EU to receive Turkmen gas via an overland pipeline through Iranian and Turkish territory. An Iranian route would have a number of advantages over a line under the Caspian. But since Russia shares strategic interests with Iran on many complex political issues in the region, including blocking the trans-Caspian line, it is unclear whether Iran would seriously consider this option.

Ashgabat has a strong interest in diversifying its gas exports and entering the European market. It has built the necessary domestic infrastructure to ensure gas deliveries from its main gas fields to the Caspian Sea area. But it still needs to overcome key obstacles. EU supporters of the Corridor need to move beyond statements of intent towards practical steps to implement projects like TCP. This requires an active and pragmatic policy from Brussels.

CONCLUSIONS: It remains to be seen whether significant progress can be made towards implementing SGC in the near future, or if Brussels’ recent statements about the project and Turkmen gas are just more rhetoric from bureaucrats. Meanwhile, the most likely scenario is that only a limited volume of gas from the Caspian region will be available for SGC. This significantly diminishes SCG’s importance, since available volumes will not suffice to substantially diversify the EU’s gas consumption or indeed motivate the economic and political investment required to realize SCG.

More in this category: « Russia-Tajikistan antiterrorist exercises: strategic messaging Central Asia, the AIIB and the advent of 5G communication »
back to top