For the first time in the country’s history, Georgia’s ruling party has secured a third consecutive term in the parliamentary elections on October 31. Many observers termed the vote pivotal as it was held under the freshly introduced predominantly proportional voting system, expected to break Georgian Dream’s (GD) tight grip on power, and amidst the unprecedented health crisis caused by the coronavirus pandemic. The opposition has refused to accept the results due to a large number of irregularities and pledged to boycott the new convocation of parliament. 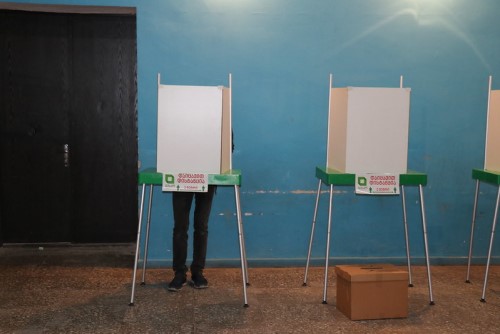 BACKGROUND: Months before the October 2020 polls, GD’s electoral prospects seemed highly uncertain. Many observers predicted that Georgia’s ruling party, which had experienced a serious voter fatigue and a deep image crisis, was unlikely to win the majority for a third time in a row – something that no political party in Georgia has ever achieved since the country’s independence. Surveys indicated that GD had steadily lost public support since the previous parliamentary elections in 2016, which GD won decisively by securing 49 percent of the vote. In January 2020, the ruling party’s approval ratings were as low as 20 percent. Public support for key GD or GD-affiliated politicians had also fallen significantly.

This downward trend was driven by domestic discontent as Georgians became frustrated with GD’s inability to tackle pervasive economic problems, growing corruption and nepotism. Infringements on judicial and media independence have also been serious concerns. Surveys conducted ahead of the October polls clearly indicated that a significant number of respondents would prefer a coalition to a one-party government, suggesting that Georgian voters view the system of concentrated power in their country as erosive to democracy and state institutions. Despite the voter fatigue, GD proved able to win the elections; however, it increased the use of questionable tactics in order to stay in power.

The most serious blow to GD’s reputation came in June last year, when the ruling party decided to violently disperse large-scale protests that erupted after its MPs invited a delegation with Russian Duma lawmaker Sergei Gavrilov to the Georgian parliament, allowing him to address the deputies from the parliamentary speaker’s seat. Russia reacted harshly to the protests, which it deemed anti-Russian. Russia also banned direct flights to Georgia at the height of the holiday season and introduced restrictions on Georgian wine imports. The parliamentary scandal and its aftermath seriously undermined GD’s image as a political party that seeks reconciliation with Russia and avoids using heavy-handed methods against citizens.

A few months ahead of the elections, the negative trend in GD’s ratings was reversed. Some observers have that this was likely due to the government’s successful early response to the first wave of the COVID-19 outbreak, curbing the number of infections and deaths. During this difficult time, the country experienced a “rally-around-the-flag” moment and citizens largely supported a strict lockdown despite its serious economic and social consequences.

The lack of other viable political options is another likely reason for GD’s election victory. For years, the weakened United National Movement (UNM), which is the largest opposition party, has been unable to challenge GD despite the diminishing public support for the ruling party. So far, no significant third political power has emerged that would be able to break the GD-UNM duopoly and put an end to the politics of personality, embodied in the conflict between the two arch-rivals Bidzina Ivanishvili and Mikheil Saakashvili.

Forming a united bloc or election coalition would have been a feasible option for the opposition, had GD not won majority under the new voting system and been unable to form a government. Yet in reality, a broad coalition of opposition forces would have been hard to achieve due to several disagreements within opposition ranks. The main bone of contention was Saakashvili’s candidacy for the Prime Minister post put forward by UNM, which the other opposition parties rejected. Before the elections, the opposition was only able to reach an agreement that envisaged nominating common candidates in Tbilisi’s majoritarian districts, supporting each other’s candidates in the run-offs in the regions and carrying out judicial and economic reforms in case GD would step down.

With these results, the ruling party has a significant chance of securing a simple majority in the parliament and form the government independently. After the first round of elections on October 31, GD won 61 mandates via proportional lists and 14 mandates in single-mandate constituencies, which in total gives it 75 seats in the 150-seat parliament. GD candidates are also projected to win in 15 out of 16 majoritarian constituencies, which are scheduled for a runoff on November 21.

IMPLICATIONS: The voting will result in an unusually diverse new parliament thanks to the newly modified voting system with an exceptionally low threshold of 1 percent, which allows even small political groupings to enter the legislature. The new electoral law was passed in June this year after months of pressure from the public as well as Georgia’s Western partners. The opposition and civil society advocated a switch to a fully proportional electoral system to ensure fair representation of all voices in the parliament and to prevent the consolidation of power in the hands of one political party. The newly modified electoral framework is not fully proportional – 120 members of the parliament are elected via party lists and the remaining 30 in single-mandate constituencies. Before the reform, 77 deputies were elected proportionally and 73 through the majoritarian system.

A political crisis followed the elections, as the opposition refused to accept the voting results and accused the authorities of massive electoral violations. On November 3, all opposition parties taking part in the elections signed a joint statement declaring that they refuse to take up their seats in the new convocation of the parliament. The statement also called on the authorities to schedule a reelection and to address all election irregularities. The opposition claims that numerous violations took place during the pre-election period and on voting day, including bribery and intimidation of voters, and widespread falsification of voter protocols.

The OSCE’s International Election Observation Mission confirmed that many irregularities took place during the vote but stated that the elections were “competitive” and respected “fundamental freedoms.” Georgia’s major international partners issued similar statements, asserting that violations “continue to mar Georgia’s electoral process and are unacceptable” but are “not sufficient to invalidate the results.”

The political crisis is bound to escalate. Since October 31, the opposition has been organizing large-scale protests across the country to pressure the ruling party to repeat the vote and to dismiss the current electoral administration. Predictably, the authorities have accused the opposition of destabilizing the country and launched another investigation into an attempted overthrow of the government by “certain persons” upon failing in the elections. Legal experts assert that since the opposition is set to boycott the parliament, GD can unilaterally recognize the legitimacy of the newly elected parliament under existing law. However, this would be politically costly for GD, and Georgia's international partners are unlikely to accept such solution.

CONCLUSIONS: Despite initial hopes, for now the new voting system is unlikely to pave the way for a coalition government that could put an end to one-party politics in Georgia. The possibility of GD consolidating power for the third term in a row raises acute concerns that without decisive pressure from Georgia’s Western partners, GD will continue to slide away from the rule of law. The coming months will be particularly challenging for GD as Georgia is simultaneously experiencing a political crisis over the election results, a particularly severe second wave of COVID-19, and a burgeoning economic crisis. Tbilisi also faces a looming security concern following the recent ceasefire in Nagorno-Karabakh and the deployment of Russian peacekeepers there, which will strengthen Moscow’s posture in the South Caucasus.

More in this category: « The New China-Kyrgyzstan-Uzbekistan Corridor War in Nagorno-Karabakh Requires a Russian Balancing Act »
back to top