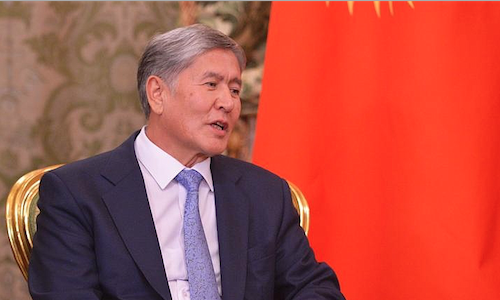 Talks on amending Kyrgyzstan’s Constitution started already in 2013. Political forces have cited various reasons, ranging from the need to carry out a full-fledged reform of the judiciary to protecting the country’s sovereignty. This time, the initiators of the possible changes refer to an urgent need to increase the competencies of the Prime Minister by decreasing those of the President. This motivation has legitimately generated speculations that the incumbent President, whose term expires in 2017, is planning to become the next Prime Minister. However, during his latest press conference, President Atambayev firmly stated that he will leave the political scene and will become neither Prime Minister, nor Speaker of Parliament. In his words, “the current Constitution creates a great basis for a potential conflict between the Prime Minister and the President that can later escalate into a large confrontation and destabilize the entire political situation of the country. Therefore, the referendum is primarily needed to set a clear and transparent system of checks and balances.” In support of this statement, the Head of the President’s Office also noted that political stability in the country is maintained not by the Constitution but by the President’s personal qualities.

Despite statements from the President and his inner circle denoting their good intentions, prominent politicians and civil society activists object to the introduction of any changes. The so-called father of the current Constitution, leader of the Ata Meken party Omurbek Tekebayev, believes that the proposed changes aim to preserve and strengthen the political influence of the President and his entourage, even after he leaves the office. “The idea to introduce amendments to the Constitution and transfer much of the decision making from the President to the Prime Minister will only lead to authoritarianism. If the President is keen to change the constitution, he should launch a constitutional council to debate all the proposed matters and postpone the referendum until the spring of 2017,” said Tekebayev. The President of the Venice Commission Gianni Buquicchio voiced a similar suggestion, stating that such massive amendments need thorough public discussions.

According to local experts, the proposed changes to the Constitution will also severely weaken the role of the Parliament, which will be limited in its right to issue mistrust in the government and dissolve it. This will indeed throw the country back to 2010 and will jeopardize all its previous aspirations to become Central Asia’s only parliamentary democracy.

Moreover, the suggested amendments to the Constitution will also affect judicial reform. If the changes are adopted, the Constitutional Chamber of Kyrgyzstan’s Supreme Court, the primary institution charged with overseeing the constitutionality of governmental acts, will have to agree its decisions with both the President and the Parliament. According to Bishkek-based political analyst Tamerlan Ibraimov, “this will yet again put the judiciary system into a full political dependency on other branches of power. The fact that the constitutional court must agree with the Parliament or the President on whether their decisions are constitutional or not is absolutely wrong and in this case, there is absolutely no need for the court.” Moreover, many experts fear that such an amendment will lead to a series of laws that will violate human rights.

Indeed, the constitution has been changed multiple times over the past 23 years; mainly to the benefit of the ruling political elite. Unfortunately, the country’s leadership habitually blames the constitution for their own lack of political will to carry out real political reforms and has a keen interest in subjecting it to constant changes. The currently proposed amendments appear to be no different.