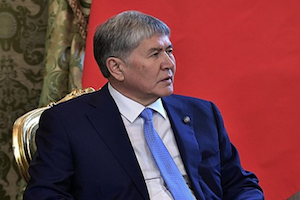 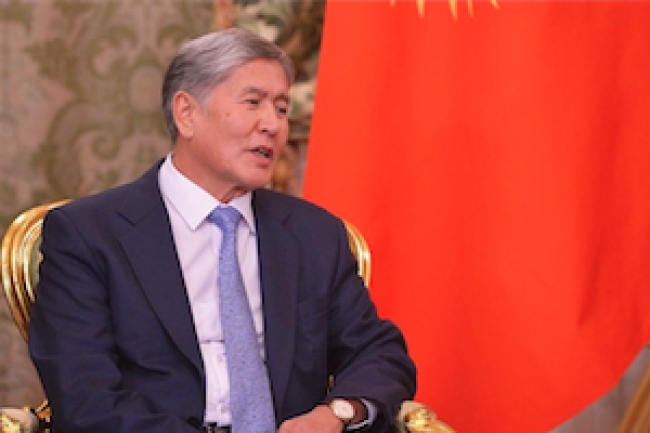 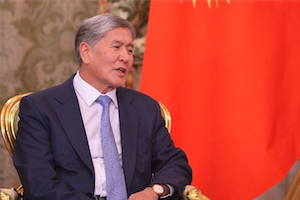 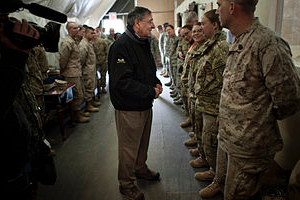 On April 7, Kyrgyzstan commemorated the fifth anniversary of its popular revolution that put an end to the highly corrupt, criminalized and authoritarian regime of the ousted President Kurmanbek Bakiev. Alongside a number of high-ranking state officials, President Almazbek Atambayev took part in a solemn ceremony in Bishkek’s Central Square Ala-Too, at the site where nearly 100 demonstrators were shot dead by snipers on April 7, 2010.

In his emotional speech to the participants of the ceremony, President Atambayev stated once again that his predecessor established a highly corrupt regime, which robbed the whole country and described the system of the day as “monstrous,” referring to a number of killings of politicians, journalists and businessmen during Bakiev’s reign. The president went on to state that unlike a number of Arab countries and most recently Ukraine, which have all toppled similar regimes, Kyrgyzstan has in a short time managed to recover and is “currently on the right track of enhancing its democratic institutions, establishing justice and fighting corruption.”

Despite Atambayev’s positive remarks, the ideals of the April 2010 Revolution are very far from being met. Even after the president’s speech, dozens of participants of the ceremony demonstrated in front of the White House accusing the regime of failing to bring the perpetrators of bloodshed to justice, to systematically tackle corruption and bring back the assets stolen from the country. Indeed, none of the high-ranking officials of the Bakiev regime accused of direct involvement in the killings during the revolution are serving prison sentences. All are sentenced in absentia, including the former President himself, who is now residing in Belarus and leading a comfortable life. His son Maxim Bakiev, who has embezzled millions of state funds, now resides in London. According to a recent journalistic investigation by Global Witness, the son of the ousted President has purchased a house worth 3.5 million GBP. Kyrgyzstan’s continuous demand for their extradition has not been successful.

The revolution’s anniversary was also met with other critical comments from political and expert circles. In the words of Edil Baysalov, former Minister for Social Development and an active participant of the April 2010 events, “after 5 years, the country’s ruling political elite have failed to keep their promises; the country still suffers from widespread corruption, socio-economic challenges are growing, commitments to establish parliamentary democracy with a multiparty system have all been discredited.” Recent developments in the country tend to speak in favor of these remarks. None of the political parties, as driving forces behind a parliamentarian form of government, have managed to evolve as formal institutions and continue to represent informal unions of individuals guided by personal interests.

Furthermore, the commitment to address widespread corruption in the aftermath of the April 2010 events features a selective rather than a systematic approach. Despite the arrest of a number of high-ranking officials, corruption remains present at all levels and the latest Corruption Perception Index of Transparency International clearly demonstrates this fact.

Commenting on the anniversary of the April Revolution, the leader of the United Opposition Movement and MP Ravshan Jeenbekov noted that instead of carrying out democratic reforms, the country has on the contrary taken a big step back by adopting two controversial laws; one banning “gay propaganda;” another labelling foreign funded organizations as “foreign agents.” Both initiatives severely limit civil liberties and put the further development of civil society into great jeopardy. According to local civil society activists, this process of increasing authoritarianism is likely to flourish after Kyrgyzstan becomes a full-fledged member of the Moscow-led Eurasian integration project.

Indeed, each anniversary of the April 2010 events generates public debate on whether the country has reached its ideals and where it is moving further. So far, one can name the downfall of family rule, prevention of a large-scale ethnic conflict and the overall socio-political stability as major achievements of the past 5 years and the upcoming parliamentary elections in the autumn will be a key test for the country’s further stability.

The unofficial visit to Moldova’s capital Chisinau of Kyrgyzstan’s President, on the private jet of one of the country’s influential oligarchs, has spawned different opinions among the Kyrgyz public. The country’s leading opposition forces have sharply criticized the visit and demanded immediate clarification from the president.

On March 15, President Atambayev’s press service released official information on his upcoming visit to Saint Petersburg to hold bilateral talks with his Russian counterpart Vladimir Putin. Later, a number of media sources reported that before heading to Russia, Atambayev also visited Chisinau for several hours to speak with the local oligarch and deputy head of Moldova’s Democratic Party, Vlad Plahotniuc, who even provided his private jet to the Kyrgyz President.

During his short stay in Chisinau, Atambayev did not meet Moldova’s President Nicolae Timofti or any other high-ranking state officials, a gesture described by many experts to be highly undiplomatic. In explanation, Timofti’s press secretary told local media that Kyrgyzstan’s President was short on time to organize a meeting of two heads of states and confirmed that he instead met “someone” in Chisinau. That “someone’s” reputation in Moldova has raised further widespread criticism of the Kyrgyz President. According to Chisinau-based political analyst Igor Bocan, Atambayev’s interlocutor is considered Moldova’s richest man and one of the most influential figures in the country, controlling a number of economic spheres including the banking sector. Plahotniuc has earlier been involved in legal scandals related to his business activities in the United Kingdom and the Netherlands, noted Bocan.

The unannounced or rather secretive visit to Chisinau immediately activated the Kyrgyz opposition. During a session of the Kyrgyz Parliament, opposition MP and leader of the United Opposition Movement Ravshan Jeenbekov criticized the President for using someone’s private jet and demanded an explanation of the visit’s purpose. In his words, “as head of an independent state, the president has no right to use someone’s private jet and the Kyrgyz public has the full right to know where the Kyrgyz president was, which meetings he held and what subjects were discussed.” Jeenbekov has further suggested creating a special commission to investigate the matter and draw concrete conclusions. Following a number of similar critical remarks, the head of the Presidential Administration’s foreign relations department Sapar Isakov released a statement noting, “it is not yet time to comment Almazbek Atambayev’s unofficial meeting in Chisinau, but I could clearly state that this visit, just like all other activities of the president, was dictated by the national interests of the Kyrgyz Republic.” Isakov refrained from giving any further comments.

Kyrgyz and Moldovan news media are prodding the real purpose of the Kyrgyz president’s brief meeting with Moldova’s controversial oligarch and politician. A number of experts claim that the two might have discussed Moldova’s perspective of joining the Russia-led Eurasian Economic Union, with the Kyrgyz president being the Kremlin’s messenger. Others argue that the meeting exclusively focused on business related issues. Nevertheless, this is not the first time that Kyrgyzstan’s highest state official held secret talks with foreign oligarchs. During the tenure of the ousted President Kurmanbek Bakiev, media reported on his secret meeting with Russian oligarch Boris Berezovsky, who was then wanted by Russian prosecutors for a number of criminal charges, ranging from financial fraud to engineering a putsch.

After his controversial visit to Chisinau, Kyrgyzstan’s president flew on the same jet to Saint Petersburg to meet his Russian counterpart. This was Putin’s first public appearance in more than a week, leading to various rumors of his whereabouts. Atambayev said, “They are not very correct.” He added that “The Russian President not just goes out for strolls, but takes the seat at the wheel to take his guests for a fast ride.”

Currently, Kyrgyzstan’s president is paying official visits to a number of European countries and has met with the Austrian, Swiss and French presidents. The Kyrgyz delegation is expected to hold talks with German Chancellor Angela Merkel and President Joachim Gauck in Berlin in the beginning of April.