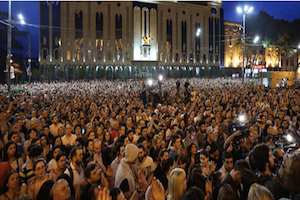 BACKGROUND: Far-right groups and movements are not a new phenomenon in Georgia. Radical groups conducted the infamous attack on the LGBT pride march in 2013, as well as the raid on the Kiwi vegan café in 2014. Until recently, many such actions were either initiated by the Orthodox Church, or constituted isolated, spontaneous incidents. Recently, however, Georgia’s far-right has evolved both horizontally (the consolidation of dispersed groups into a wider movement), and vertically (evolving from unorganized cells into organizations with political ambitions). The summer of 2017 was a crucial period, catalyzing the evolution on both levels, when the Georgian March was established by Sandro Bregadze and Gia Korkotashvili, following protests against a child abuse case involving an Iranian citizen.

Horizontally, Georgian March created a platform around which other far-right groups could intensify their communication and coordination. This platform was further upgraded by the establishment of the Agreement of National Powers, following the May 2018 rallies. Signatories include, besides Bregadze and Korkotashvili, such names as Levan Chachua from the Georgian Idea party, Zviad Tomaradze from several traditionalist NGOs, and Dmitri Lortkipanidze from the Y. M. Primakov Georgian-Russian Centre. The openly fascist organization Georgia’s National Unity, led by Giorgi Chelidze, is more indirectly involved. This organizational platform, although it remains loose for now, could create the preconditions for a consolidation of the Georgian far-right groups to a wider movement.

Vertically, these groups have developed in several stages, beginning with the spontaneous participation of small organizations in actions often organized by the church, such as the 2013 violence against the anti-homophobia rally. In the second stage, these groups initiated independent incidents, such as the attack on the Kiwi vegan Café in 2014 as well as brutal and often fatal attacks on transgender people. Finally, independently organized mass rallies have emerged, such as the Georgian March, vigilante groups have been established, and in February 2018 the Georgian March announced its intention to enter politics.

Most of these groups are too radical and bizarre even for the quite conservative majority of Georgians, and are therefore frequently not taken seriously. The vigilante groups exist only on paper and their prospect of entering parliament seem scant. However, the recent ascendancy of far-right groups in the West and reports of possible support for these groups from the Kremlin, call for caution in Georgia as well.

IMPLICATIONS: Many Georgians are concerned that the local far-right groups could actually be funded or even controlled by Russia. Indeed, several direct and indirect ties with the Kremlin exist. After announcing the end of his political activities, the above-mentioned Lortkipanidze joined the Y. M. Primakov Georgian-Russian Public Centre as its new director. The Centre was established in 2013 by the International Relations Institute and the Gorchakov Fund. The latter is directly linked to the Russian Ministry of Foreign Affairs and its role is to promote favorable opinions about Russia abroad. Yet another person involved in the organization of the Georgian March, Shota Apkhaidze, was a member of the pro-Russian think-tank Eurasian Institute.

Given other, less direct links to Russia among the signatories of the Agreement of National Powers, it seems reasonable to assume that the Kremlin is interested in supporting and manipulating the rise of the far-right groups in Georgia to its own benefit. However, these links remain rather rare and predominantly exist on an individual level. Most of these groups were neither created by Russia, nor are they pro-Russian.

To better understand the rise of far-right narratives in Georgia, we should look to the EU rather than Russia. In the first stage of their existence in the EU, the far-right parties often existed for years as a laughing stock for standard politicians and journalists. Today, they have managed to establish themselves in the national parliaments of several EU member states and have significantly shaped the political discourse either directly or through traditional parties adopting their agenda. Frequently, the real danger comes not from the marginal far-right parties themselves, but from their agendas, suddenly presented as mainstream. Two scenarios can be discerned, leading to such a situation.

The first, slower, scenario is characterized by the long-term dissemination of far-right groups and problems nurturing their existence. The marginal far-right parties then have enough time to evolve mainstream mimicry without changing the core of their ideology. One such example is the National Front in France.

In the second scenario, mainstream parties seek to neutralize the danger of the far-right groups by adopting their narratives. For example, many Slovak parties from the opposition as well as the governing coalition adopted strongly anti-immigrant narratives promoted by the Slovak far-right during the peak of the migrant crisis in 2015. In result, radical narratives entered the political mainstream in Slovakia and ratings for the once marginal, far-right People's Party – Our Slovakia jumped from 1.58 percent in 2012 to 8.04 percent in 2016. Even more alarming is the case of Hungary, where an attempt by the ruling party to marginalize the far-right Jobbik by using its rhetoric was one of the factors turning it into a far-right party itself.

There is a real danger that Georgia could fit into the second scenario. The Georgian Dream seems not just to downplay the possible danger of the far-right groups, but also to accept them as a tool for intimidating troublesome liberal groups and activists. This was the case during the May 2018 White Noise demonstration, which ended prematurely due to a far-right counter-rally, as well as a planned anti-homophobia demonstration that was cancelled for the same reason.

Compared to their links to Russia, the ties of these groups to mainstream Georgian politicians and political parties are much more visible. For example, two members of the Georgian Dream, Gia Jorjoliani and David Chichinadze, became bail guarantors for activists of the Georgian March arrested in connection with another incident at the Rustavi 2 TV station in March 2018. These groups will not fade away anytime soon, and if their influence rises, there will be groups of politicians in several mainstream Georgian parties willing to adopt far-right and nativist narratives and policies.

CONCLUSIONS: Russian interests and possible meddling in the current rise of Georgian far-right groups should not be overlooked. However, their emergence presents a rather logical reaction of the radical segments of a still predominantly conservative society against the steady process of liberalization and westernization. Marginal for now, the radical parties could rise in significance and influence especially if Georgia and the EU fail to effectively address the increasing socio-economic and especially educational gap, not just between rural and urban areas, but also inside cities, leading to an extremely low social mobility of these disadvantaged groups in Georgia.

The EU example teaches us that the fastest path to the establishment of far-right narratives in mainstream politics is that mainstream parties adopt these narratives in an attempt to marginalize the far-right parties. In Georgia, such groups seem to enjoy both support from the Kremlin and the benevolence of the ruling party, viewing them as a suitable tool to suppress problematic liberal groups and movements. Moreover, the support from individual politicians from established parties suggests that the possible adoption of far-right narratives into the political mainstream could present an avenue for retaining popular support.

AUTHOR’S BIO: Tomáš Baranec is a graduate of Charles University in Prague. His research interests include nationalism and factors of ethnic conflicts and separatism in the Caucasus. This article was made possible thanks to the “STRATPOL Young Professionals Program”.

More in this category: « UNGA Adopts Resolution on Strengthening Cooperation in Central Asia Project "ASTANA": Signs of Demographic Upheaval? »
back to top