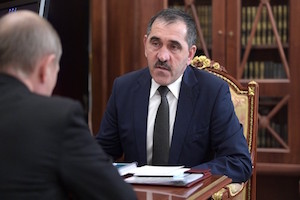 BACKGROUND: Ingush authorities introduced a counter-terrorist operation (CTO) regime in the Ingush village of Psedakh in Malgobek district on August 23, as Ingush security forces besieged three members of Malgobek jama’at in a house. Following an exchange of fire between militants and members of the security forces, a powerful explosion detonated from within the house destroyed the building, killing everyone inside. One of the deceased militants was identified as Bekhan Soltukhiyev, leader of the local Malgobek jama’at. Local law enforcement held Soltukhiyev responsible for organizing several attacks on Ingush security forces since the start of 2017, including the assassination of two members of the patrol police in April and firing a rocket-propelled grenade into Malgobek police headquarters in March.

Inside the militants’ house, authorities recovered a large amount of explosives, alongside an arsenal of small arms. They also discovered sophisticated bomb-making equipment in the basement of the destroyed building. According to Ingush sources quoted by the Caucasus Knot, militants were planning to conduct a number of terrorist attacks across Ingushetia. A tipoff from outside the village warned security forces about the location of the militants, which prompted a large-scale CTO. However, as acknowledged by the head of Ingushetia, Yunus-bek Yevkurov in an interview to Interfax-Yug, village authorities must have known about the militants’ activities and locals must have noted the presence of Islamists. However, the republic’s security forces received no such information. Yevkurov called for an immediate investigation into the role of the local authorities in hosting militants in the village of Psedakh. Soon after the armed confrontation in Psedakh ended, the authorities lifted the CTO regime in the district.

IMPLICATIONS: A village of about 5,500 residents, Psedakh has been a hotbed of the local insurgency in Ingushetia’s Malgobek district since the Islamist insurgency spread from neighboring Chechnya in the early 2000s. After the Ingush insurgency weakened and gradually declined during the 2010s, Malgobek district remained relatively quiet. This year, however, the situation began to change. Since the start of 2017, eight conflict-related incidents have been reported in Malgobek district, resulting in nine deaths. Keeping in mind that all of these incidents have occurred since early spring, 2017, this year promises to be one of the deadliest in Ingushetia. Only 16 people died as a result from the Islamist insurgency in 2016, prompting local authorities to announce on several occasions that that there were hardly any militants left in Ingushetia.

Indeed, since the capture of the founding father of the Ingush insurgency, Amir Magas (Ali Taziyev), in 2010, the Ingush Salafi militancy has been in decline. Security forces have effectively assassinated all insurgent leaders appointed after the imprisonment of Magas, while infiltration and desertions have weakened the Ingush Salafi resistance and limited its overall ability to sustain its activity. Unlike their Dagestani and Chechen comrades, Ingush militants lacked a central chain of command, which prevented them from pledging allegiance to the terrorist organization known as the Islamic State in Iraq and Syria (ISIS), as well as from effectively collaborating with Salafi militants from neighboring republics. While several ISIS-related incidents and attacks have taken place in Dagestan and Chechnya since the rise of the caliphate in 2014, this has not been the case in Ingushetia. The outflow of Salafi youth to Syria further exacerbated the decline of the Ingush insurgency.

As compared to Dagestani militants, Ingush jama’ats were rapidly losing the battle with pro-Russian security forces in the republic. This was evident from the decline in conflict-related casualties. For instance, the armed conflict claimed 21 fatalities in 2015 and 37 in 2014, as compared to 94 in 2013, 108 in 2012 and 167 in 2011. Aside from the events in August, the most recent CTO in Ingushetia took place in May 2016 in the capital, Nazran. There were no CTOs in 2015, and only one per year in 2014 and 2013 respectively. Compared with up to ten CTOs announced in Dagestan each year, Ingushetia seemed to become increasingly stable and peaceful.

The rise of militant activity in Ingushetia – as evidenced by the increased number of incidents and fatalities – appears to be a domestic phenomenon with little or no influence from outside the republic. In contrast to earlier militant activity in neighboring Chechnya, which was inspired by ISIS online propaganda (see CACI Analyst 02/07/17), there is no evidence that Malgobek militants ever claimed to be part of the caliphate. Statements by Yevkurov as well as reports in local media suggest that the local population of Psedakh village supported the militants. With the exception of one slain member of Malgobek jama’at, who was a Chechen national, all other deceased militants were local residents, none of whom ever travelled to the Middle East.

On the one hand, the domestic character of the insurgency should make it easier for the authorities to contain, perhaps by managing to coopt the local population and to plant moles among insurgents, a strategy successfully implemented against previous waves of Ingush Islamists. On the other hand, the recent escalation of violence indicates that there is still a potential for local discontent and violent mobilization and that homegrown militant communities are far from extinct.

CONCLUSIONS: Unless the recent intensification of violence in Ingushetia turns out to be a temporary phenomenon, it represents a dangerous development for local authorities, who have long boasted to the Kremlin of their successes in wiping out the Salafi insurgents. Unlike the authorities in Chechnya and Dagestan, the Ingush administration would be not be able to blame the increase of militant activity on “foreign influence” and the spread of ISIS or its ideology. While security forces lack precise information on the strength of the Malgobek jama’at, the ability of militants to escalate violence since early spring 2017 suggests that the August 23 CTO could hardly have wiped out the entire militant cell in the district. For Moscow, the homegrown aspect of the current Ingush militancy is yet another unpleasant piece of evidence indicating continued local resistance against the Kremlin-backed authorities.

More in this category: « The EU and Azerbaijan: What is on the Negotiation Table? The India-China Clash and the Expanded SCO »
back to top