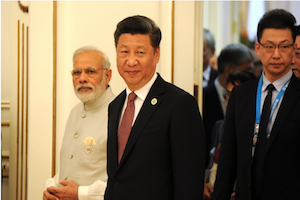 BACKGROUND: Even if the Doklam crisis had not occurred, the appearance of enhanced contention between Beijing and New Delhi in Central Asia in general and the SCO in particular is a likely development of the SCO’s new membership structure. The long-standing Indo-Chinese rivalry in Southeast, South, and Central Asia is a keystone of China’s overall foreign policy strategy to confine India’s influence to the subcontinent and even challenge it there. In this regard, Pakistan has been a willing instrument of Chinese policy and its leaders regularly intone the “all-weather” friendship between Pakistan and China to include policies towards Afghanistan and Central Asia. Thus, Pakistan has become a central part of China’s Belt and Road Initiative to the extent that China is not only building a road from its border to the port of Gwadar but also invests between US$ 46 and 59 billion in Pakistan alone. China also now stands behind Pakistan and thus its support for various terrorist groups inside Afghanistan in the wake of President Trump’s newly announced Afghan strategy.

This is increasingly intolerable to India, which is determined to play a great power role in Asia. In recent years, Delhi has not only sought a massive upgrade in its indigenous defense capability (with uneven results); it has also visibly expanded its presence in Southeast and Northeast Asia and Afghanistan, as well as its ties with the United States. Trump’s strategy also explicitly calls on India to play a greater role than it already does in Afghanistan, presumably in some as yet unspecified form of coordination with Washington.

China has long viewed the SCO as a building block of its vision for Central Asia and has resisted India’s membership due to its determination to brook no rivals in its quest for Asian great power status. China preferred Pakistan but could only get its way as part of a package deal whereby both states entered the SCO, thereby also mollifying Russia, India’s principal supporter.

However, given the dynamic evolution of Russo-Chinese relations and overall Asian relationships in the last few years, it is currently doubtful if Russia would continue to prefer India during a crisis with China. While Russia would try to remain neutral, it would probably ultimately have to lean towards China, albeit with great regrets. For instance, the Doklam crisis generated much anxiety in Moscow, not only because it raised the prospect of armed conflict between India and China, but might also have forced Russia to take a stand. Russia’s ideal policy in Asia would be to have a strategic triangle with China, India, and itself all pushing the same policies. Yet this dream has repeatedly foundered on Indo-Chinese rivalry.

Precisely because China has regarded the SCO as a building block of its hegemonic standing in Central Asia, the organization has until now been the site of many Sino-Russian disputes, hindering the SCO’s ability to play the role envisioned by China or maximize its aspiration to be an effective security provider in Central Asia. Whereas the SCO charter and summits regularly decry terrorism and call for collaboration against it, China and Russia now embrace Pakistan, which sponsors terrorism in Afghanistan and against India. Beijing and Moscow have not only vitiated the effectiveness and legitimacy of the SCO; they have also incorporated the overlapping Indo-Chinese and Indo-Pakistani rivalries into the heart of the organization.

During the Doklam crisis, India for the first time compelled China to treat it as an equal instead of retreating. In the aftermath, it is easy to imagine future situations regarding Afghanistan and Central Asia where their mutual rivalry as well as Chinese support for Pakistan will obstruct efforts to use the SCO as a platform for genuine and meaningful regional security cooperation among the members.

This will particularly be the case as Washington steps up its military commitment to Afghanistan and if it is able to enlist greater Indian support for the government in Kabul. India will likely manifest its enhanced confidence and willingness to stand up to China’s assertive and hegemonic behavior in the near future, within the SCO and the region at large.

IMPLICATIONS: The consequences of this trend will be amplified if India and the U.S. enter into discussions about how India can and will contribute to the U.S. strategy that in important ways comports with India’s support for the Ghani government and anti-Taliban stance in Afghanistan. To the degree that China continues to condone Pakistan’s policies as long as they do not materially injure Chinese interests, Central Asia will grow in importance as an area of increased Sino-Indian rivalry, which will take a visual expression within the SCO. The SCO will therefore likely continue to be a rather dubious foundation upon which to build an enduring and legitimate security system in Central and South Asia, even if it attracts new members.

India has for some time publicly expressed its skepticism and reservations concerning the Belt and Road Initiative. It also recently announced its intention to collaborate with Japan in building a rival project to China’s extensive economic-political and even military investment in Africa, for example the Chinese naval base in Djibouti. Although Central Asian governments are in no position to renounce the benefits of participating in China’s initiative, they would also welcome any counteracting Indian investment initiative especially as they have welcomed both Indian and Japanese investment in the past. Since investment in this region plays as much of a political as an economic role, a larger economic dimension will likely be grafted onto the strategic and political rivalry that already exists in Southeast and South Asia. If Washington weighs in with substantial support for an Indo-Japanese initiative or actually proposes its own plan, China will undoubtedly feel the competition.

Central Asian states will welcome anything that adds to their individual and collective capability to maneuver among alternative investors, foreign donors and great powers. Therefore, they have a material interest in using India to regulate or restrict the Chinese presence, especially as Russia no longer can or will play the role of an economic counterbalance to China in Central Asia. Future proceedings of the SCO will undoubtedly reflect these maneuverings. Indeed, the SCO has already been the scene for competitive discussion of rival Russian and Chinese schemes for economic progress in Central Asia. There is every reason to expect more of the same.

India’s membership in the SCO in the context of its increasingly overt and contentious rivalry with China across Asia also raises interesting problems for Russia, since it obstructs Russia’s vaunted dream of a strategic triangle. Although Moscow would clearly prefer to have India buffer China, it cannot easily withdraw support for the latter on which it depends heavily for economic and political support in Asia and globally. India has already started looking to the U.S., Europe and U.S. allies in Asia in response to its perception of Russia’s tilt towards China. Russia may have no ultimate choice but to placate China due to their shared border, China’s immense military capability and Russia’s global ambitions.

Another question is whether Russia and India will be able to cooperate in Central Asia and the SCO. Despite their long-standing mutual friendship, Russia is now becoming a sponsor and supporter of Pakistan against India, for example by selling Pakistan weapons. India is unable to accept that status quo. While China may desire that its friends be friends with each other, India may insist upon the same and thus demand a corresponding distance from its enemies, i.e. Pakistan and to a lesser degree China.

CONCLUSIONS: These policy considerations will likely emerge rather soon in Central Asia given the differences over Afghanistan, China’s Belt and Road Initiative, and U.S. pressure on India regarding Afghanistan. If a major U.S. regional initiative for Central Asia emerges in the future, that would add to the strains now becoming visible in the Indo-Russian relationship. All of these factors will almost certainly come to play in the framework of the SCO given its expanded membership and might actually make it a more interesting if even less effective instrument of regional security than it already is.

More in this category: « Homegrown Insurgency is on the Rise in Ingushetia China's Aluminum Industrial Capacity Cooperation in Kazakhstan »
back to top