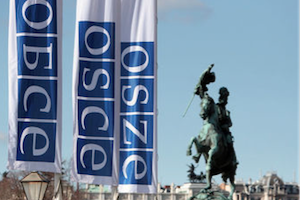 BACKGROUND: The outbreak of clashes between the Armenia-backed Nagorno-Karabakh and Azerbaijan immediately turned into a military offensive conducted by Azerbaijan in the southern and north-eastern segments of the line of contact. The fighting enhanced Russia’s influence on the conflict and has seemingly put an end to the protracted negotiation process under the auspices of the Minsk Group.

The trilateral truce reached in Bishkek between Armenia, the self-declared Nagorno-Karabakh Republic and Azerbaijan in May, 1994, owed more to the parties’ willingness to terminate the hostilities than to the efforts of the mediators. In the aftermath, the status quo was maintained through a relatively refrained posture by both parties, without security guarantees from the major powers or imposed international peacekeeping mechanisms.

The OSCE became the main platform for political consultations and peace negotiations, establishing the so-called Minsk Group in 1992. The three co-chairs from the U.S., France and Russia – the powers that took the initial lead in promoting a peaceful solution – were the core of this initiative. In October 1992, the OSCE requested an arms embargo on the parties directly involved in the combat, which remains valid today. In 1993, the UN Security Council passed the non-mandatory Resolution 853, urging “states to refrain from the supply of any weapons” to the forces operating or stationed in the conflict zone. Nevertheless, the Minsk Group has never used these levers given their political inadequacy, which has in turn highlighted the lack of deterring mechanisms and political capacity to ensure the implementation of the OSCE embargo.

The ineffectiveness of the Minsk-group format is a result of the contradictory priorities and agendas of both the powers involved and of the conflicting parties. France played a relatively proactive role in the region in the early 2000s, but currently appears satisfied with formal representation in the Minsk Group. Likewise, the U.S. pursued an active policy in the South Caucasus in the 2000s, which was nevertheless reversed during Barack Obama’s presidency, leading to a waning U.S. influence in the region. In contrast, Vladimir Putin’s Russia has re-emerged as a revisionist power, most prominently demonstrated by its aggressions towards Georgia and Ukraine. These moves placed Russia on a collision course with the West and specifically with the U.S., a fact reflected in the limitations of the Minsk Group.

Despite its co-chairmanship, Russia consistently violates the OSCE arms embargo. Moscow has sought to acquire substantive levers on the conflicting parties, fueling the conflict by supplying both parties with arms while at the same time sustaining its position as the “indispensable” power in managing the conflict. Over the last two decades, Russia has become adept at leveraging the conflicts between the states and the breakaway territories of the South Caucasus, making them equally vulnerable and dependent.

IMPLICATIONS: Prior to the hostilities, now known as the Four-Day War, Russia effectively buried an initiative to set up an investigation mechanism for Nagorno-Karabakh. The mechanism, suggested by the U.S., entailed the installation of gunfire-locator systems and sound-ranging equipment to determine the source of attacks along the line of contact (LFC). This could have helped preventing incidents along the LFC, but was resisted by the Russian side. In March, the head of Russia’s Ministry of Foreign Affairs’ information department Maria Zakharova unambiguously claimed that Russia “seeks to avoid the creation of an investigation mechanism” – thereby reinforcing the impression that Moscow was challenging the current negotiating format.

The Four-Day War demonstrated that Russia’s interests concerning Nagorno-Karabakh differ starkly from those of the West. The Russian leadership took the initiative in engaging the conflicting parties as soon as the fighting began, giving Russia a decisive role in the new operational situation at the expense of U.S. interests. Moscow’s imperative in the long-term perspective is seemingly to outmaneuver the U.S. in the South Caucasus, discrediting the latter’s initiatives to settle the Karabakh conflict. Yet in the short-term, Moscow’s goal is to sideline the U.S. from the first stages of the decisive upcoming negotiations between Yerevan and Baku. Several experts also believe that Moscow is determined to utilize Baku’s vulnerability in relation to Nagorno-Karabakh to secure Azerbaijan’s membership in the Russia-led Eurasian Economic Union (EEU) and Collective Security Treaty Organization (CSTO).

Russia’s Foreign Minister Sergey Lavrov shed some light on Russia’s plans for a settlement in Karabakh. During a meeting with his Azerbaijani counterpart on April 6, he stated that in light of the Karabakh issue, it would be beneficial for Azerbaijan to join both of these Russia-led organizations. Though Moscow has declared that the Madrid principles and Kazan agreements are critical pillars of the negotiations, Azerbaijan’s EEU and CSTO membership may thus also be on the table. Furthermore, Putin likely also pursues Presidents Serzh Sargsyan’s and Ilham Aliyev’s signatures on a documented approval of Russia’s plans.

Russian news outlets Izvestia and Kommersant have cited leaks from Russia’s Ministry of Foreign Affairs stating that “intensive negotiations are anticipated in the upcoming days, where Vladimir Putin will personally be engaged in convincing the presidents to compromise,” indicating that Moscow’s plan is preliminarily accepted by Baku and Yerevan. According to the leaked information, the first stage will presumably entail Armenia’s handover of two regions to Azerbaijan, probably Akna (Agdam city and suburbs) and Varanda (the Armenian-controlled part of Fuzuli) in compliance with the Madrid principles. In return, Azerbaijan is expected to reopen economic relations with Armenia and Karabakh, which should be allowed to join the EEU to become embedded in the common economic and political space.

Simultaneously, a framework will be discussed for the deployment of peacekeepers. Since both Armenia and Azerbaijan are members of the Commonwealth of Independent States (CIS), the proposed peacekeeping mission will likely be imposed under CIS auspices akin to the format formerly used in South Ossetia. This implies that the contingent will be made up of Armenian, Azerbaijani and Russian units under Russia’s command, stationed in Nagorno-Karabakh and the surrounding provinces.

Putin will be able to put significant pressure on both Sargsyan and Aliyev, in return offering Russian guarantees for the longevity of their respective regimes. However, given the overwhelming patriotic resurgence in Armenian society, territorial concessions run a serious risk of undermining Sargsyan’s regime. On April 23, Armenian authorities therefore stressed their skepticism towards Putin’s plan on conflict resolution to Lavrov’s delegation. Sargsyan also admitted in an interview to Bloomberg that Armenia consented to withdraw from five territories surrounding Nagorno-Karabakh at Kazan in 2011, however, he saw no particular reason to negotiate with Baku at present. Public pressure and a reassessment of the new situation have incentivized the Armenian leadership to resist Moscow’s coercion. Yet it is unlikely that Armenia will prove able to evade Russia’s control of the Nagorno-Karabakh process in the long term.

CONCLUSIONS: The disruption of the status-quo and the security environment in Nagorno-Karabakh illustrated the ineffectiveness of the Minsk Group. The inertia of this format has emboldened Russia and increased its ability to control Yerevan and Baku. The new situation also enabled Russia to enhance its influence in the region, through diplomatic moves made in light of the mounting standoff with the West. In anticipation of NATO’s Warsaw summit in July, where a decision on an enhanced partnership with Georgia is plausible, Russia seeks to diminish the U.S. role in the region.

Against this backdrop, a fundamental change of the OSCE Minsk Group is urgently needed. In order to facilitate effective negotiations, the Minsk Group should announce an unambiguous commitment to the validity and implementation of the OSCE arms embargo. The Minsk Group’s political status should be elevated by substituting the current co-chairs with, for instance, deputy foreign ministers or the equivalent. The imposition of a permanent Minsk Group monitoring mission, approved by at least one of the conflicting parties, would ensure that a price would have to be paid for violations of the ceasefire.

Needless to say, the U.S. and the European allies have a considerable responsibility for handling the situation, and should be prepared to confront Russia on its current approach to the conflict. It is unsurprising that Russia uses the Minsk Group primarily as a vehicle for its geopolitical ambitions, given the waning interest of the western powers in the format and the region in general. Only principled engagement on the part of the U.S. and EU, along with a steadfast commitment to ensuring respect for the arms embargo, can put pressure on Russia to stop arming the conflicting parties.

Otherwise, the dynamic of the Karabakh conflict and Russia’s engagement in it suggest that the South Caucasus will face even worse turmoil in the future, which will have detrimental implications for security in the greater Black Sea region.

More in this category: « The "Four-Day War": new momentum for Nagorno-Karabakh resolution? Georgia's energy sector: debacle avoided, but Tbilisi needs to move beyond short-term solutions »
back to top