Starting from mid-day on April 5, the cease-fire regime was restored after heavy fighting between Armenian and Azerbaijani armed forces along the line of contact since April 2. According to information posted on the website of Azerbaijan’s Defense Ministry, “military forces are now working on strengthening their position in newly liberated areas.”

Dozens of soldiers and civilians were killed as the worst fighting in two decades threatened to spread beyond the disputed Nagorno-Karabakh territory and adjacent occupied territories. International organizations have warned that the escalating conflict could spiral into a “full-scale war” over Nagorno-Karabakh, threatening to destabilize the region. 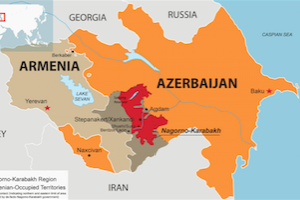 On Tuesday morning, Azerbaijan’s Defense Ministry reported that the situation along the frontline remained tense throughout April 4 and 5, and that particularly the areas of Khojavand, Fizuli, Aghdara and Tartar were under fire from the Armenian side. “The [Armenian] HQ of the strategically important military base in Madagiz, which is located on the main road to Aghdara, that is one of the big bases in this direction, has been completely destroyed in an accurate fire strike,” the statement read. “In order to minimize damages caused to our residential areas from the opposite side, our units in the Khojavand-Fizuli direction destroyed two tanks and their crew, as well as five wheeled vehicles loaded with military equipment.”

There are not yet independent records of casualties during the confrontation. Azerbaijan’s Defense Ministry claimed that 16 servicemen of Azerbaijan’s Armed Forces were killed along the frontline. A military spokesman of Nagorno-Karabakh stated that 20 Armenian troops had been killed since the fighting escalated on April 2, while 26 others were missing, the Mediamax news agency reports.

Meanwhile, Azerbaijan’s prosecutor-general’s office asserted that over 300 Armenian servicemen were killed, while 12 tanks, 12 armored vehicles and 15 artillery devices had been destroyed. The office reported that four Azerbaijani civilians had been killed and 17 wounded since the renewal of armed hostilities around Nagorno-Karabakh.

According to the Russian Foreign Ministry, Foreign Minister Sergei Lavrov and U.S. Secretary of State John Kerry discussed the escalation in the Karabakh conflict zone in a telephone conversation on Monday. It was agreed that the Russian, U.S. and French co-chairs of the OSCE Minsk Group, the main mediating body on the conflict, “should intensify their efforts to assist in the resolution of the Nagorno-Karabakh conflict.” According to the ministry’s statement, “Lavrov and Kerry have condemned the attempts by certain ‘outside players’ to instigate a confrontation around Karabakh” and “expressed serious concern over the escalation of the standoff in Nagorno-Karabakh, having reaffirmed their urgent call for immediate ceasefire.”

U.S. Vice President Joe Biden tweeted on April 4 that he had told Armenia’s and Azerbaijan’s Presidents Serzh Sargsyan and Ilham Aliyev that a comprehensive settlement on Nagorno-Karabakh is critical for their stability, security and prosperity.

The OSCE Minsk Group has urged the parties to the Nagorno-Karabakh conflict to immediately cease using force. The statement was made on April 5 and signed by the representatives of the OSCE Minsk Group (Russia, the U.S., France, Belarus, Finland, Germany, Italy, Sweden, Turkey), as well as the incoming Austrian OSCE Chair (2017) and the Serbian OSCE Chair (2015). The statement strongly condemns the outbreak of unprecedented violence along the line of contact and “urge the sides to cease using force immediately. There is no military solution to the conflict.”

The co-chairs of the OSCE Minsk Group will visit the region, including Baku, Yerevan and the disputed Nagorno-Karabakh in a few days, the French Foreign Ministry’s spokesman Romain Nadal said on Tuesday. He did not specify the date of the visit and said only that it “will take place in the near future,” while the Armenian Foreign Ministry said that the mediators are expected to visit Yerevan on April 9.

In a tweet on April 5, President Aliyev stated that “the Armenian-Azerbaijani Nagorno-Karabakh conflict must be resolved within the territorial integrity of Azerbaijan. There is no other option.” He asserted that a solution must be based on United Nations Security Council resolutions, starting with the return of five “occupied” districts around Nagorno-Karabakh region to Azerbaijan.

More in this category: « Armenia and Georgia reinforce military cooperation Ahead of parliamentary elections, pressure builds on two Georgian parties »
back to top