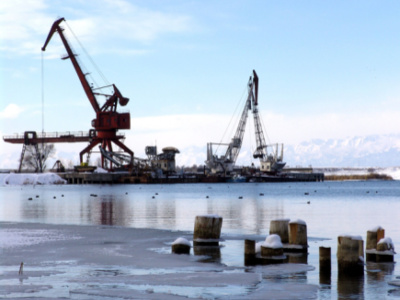 BACKGROUND: On July 6, a Russian court ordered the “temporary closure” over “environmental concerns” of the Novorossiysk oil terminal, which is a main export outlet for Kazakh oil. This happened just two days after Kazakhstan’s President Kassym-Jomart Tokayev said to the EU that his country is willing to send more oil to Europe. Earlier, President Tokayev, speaking at the St. Petersburg economic summit, stated that Kazakhstan does not recognize “quasi-state territories which, in our view, is what Luhansk and Donetsk are. There would be chaos in the world if hundreds of new countries emerged, even as there is a conflict between the legal principles of territorial integrity of states and the right of people living in them to self-determination.” On July 11, the higher court heard the appeal of the Caspian Pipeline Consortium (CPC) and changed the ruling from 30-day suspension of operations to the minor monetary penalty.

The pipeline owned by CPC was commissioned in 2001 and connected the western Kazakh oil field of Tengiz to the Russian Black Sea port of Novorossiysk. In addition to oil from Tengiz, the pipeline currently also carries oil from the offshore Kashagan and Karachaganak fields, as well as some Russian crude. The pipeline’s initial capacity was 600,000 barrels a day, which more than doubled after a major expansion project led by U.S. Chevron several years ago. Most of Kazakhstan’s crude oil goes to European refineries.

The CPC pipeline was one of the elements of the multiple pipeline strategy supported by the U.S. since the mid-1990s, and aimed at diversification of the export infrastructure for the landlocked Caspian producers. The idea was also to have shared access to these infrastructure elements by the multiple producers of Caspian energy. Other projects of the strategy included the Baku-Supsa and Baku-Tbilisi-Ceyhan oil pipelines, and the South Caucasus Gas pipeline, which initially connected the Caspian natural gas field Shah-Deniz to Georgia and Turkey, and now connects the same field to European consumers via Georgia, Turkey, Greece, Albania and Italy. This gas transportation network is today known as the Southern Gas Corridor.

The CPC pipeline was always the most problematic among these pipelines, crossing multiple regions of Russia, and facing artificially created challenges on the regional as well as federal levels. This is the only pipeline on Russian territory not fully controlled by the Russian government, and hence the problems. Just in the last several months, the pipeline was closed in June due to the reported discovery of 50 World War II-era explosives in the Novorossiysk port’s waters, and in March due to damage sustained during a storm.

IMPLICATIONS: Manipulations with court decisions and regulatory procedures is not new in the CPC’s history. Balancing the operational risks, producers in Kazakhstan frequently used the South Caucasus transportation corridor as a back-up export route for relatively smaller quantities of crude oil. Kazakhstan owns the oil terminal in Georgia’s Black Sea port of Batumi, which was heavily used for export of oil products in the past. However, the South Caucasus Corridor has hitherto not been a strategic priority for Kazakhstan, which has mostly relied on Russian infrastructure for its export and import needs despite its declared multi-vector foreign policy. This is true for oil, but also for other commodities including grain, fertilizers, coal etc.

With the new geopolitical realities, all landlocked Central Asian countries need alternative routes to access markets, as well as for import needs. One natural option would be Iran, which is nevertheless also under sanctions and not all actors in Central Asia would be comfortable using that route. In addition, Iran still has a limited transit infrastructure.

China is an alternative market that will remain important for Central Asia, but it is not going to be useful for transit due to distances to the sea. There is a southern option in the form of Pakistan’s ports via Afghanistan, but a lack of transit infrastructure, in particular for energy resources, makes this option less viable until the serious investments are made in infrastructure development.

This leaves the South Caucasus Corridor, or the so-called Middle Corridor, connecting Central Asia to the South Caucasus via the Caspian Sea, and then to Turkey or the Black Sea. While limited in capacity, and facing some organizational challenges, this is the geographically shortest option for reaching Europe from Western China and wider Central Asia. This corridor is essential in resolving the current crisis in transportation; yet more importantly, it has a significant role to play for the growing economies of wider Central Asia for years to come, connecting the region to significant markets in Mediterranean and Europe. The Middle Corridor can easily connect to the countries of the Three Seas Initiative and thus reach Northern Europe via Romania today, as well as via Ukraine when the war is over.

Even if Kazakhstan and other Central Asian states would enjoy a very harmonious partnership with Russia, it would be a wise strategy to keep alternative transportation options open and active. The current crisis shows that countries need to make a major effort to adjust to new realities. Despite years of high-level meetings, discussions, commitments and promises, the Middle Corridor has never received the deserved level of attention.

However, responding to new realities, the regional governments are taking proactive steps to facilitate development of the Middle Corridor. The recent diplomatic effort and series of regional meetings and agreements are designed to reduce artificial barriers and increase coordination in order to increase efficiency of transportation.

In early March 2022, an agreement was reached between Georgia, Azerbaijan and Kazakhstan on the development of the Trans-Caspian International Transport Route (TITR), which calls for establishing a “Eurasian Rail Alliance,” aimed at unifying regulations and reducing tariffs for transit cargo. On March 31, Georgia, Azerbaijan, Turkey and Kazakhstan signed a quadrilateral declaration on the Trans-Caspian East-West Middle Corridor, emphasizing the importance of steps to strengthen the transit potential of the signatory states.

In early May, offsite meetings of the working group and the general meeting of the association of legal entities “International Association ‘Trans-Caspian International Transport Route’” (hereinafter referred to as the Association) were held in Ankara. The participants of the general meeting approved tariff rates and volumes (forecast) of cargo transportation along the TITR route for 2022. This year, cargo transshipment is projected to grow six times, to the level of 3.2 million tons. This is due to the sharply increased demand for the TITR route against the backdrop of the war in Ukraine and sanctions against Russia. The container-shipping plan also aims to increase to 50,000 twenty-foot equivalent containers (TEU), which is double the amount shipped in 2021.

On July 18, the European Commission President Ursula von der Leyen and Commissioner for Energy Kadri Simson met with President Ilham Aliyev and Azerbaijan’s Energy Minister, and signed a new Memorandum of Understanding on strategic partnership in the energy sector. The MoU includes a commitment to double the capacity of the Southern Gas Corridor to deliver at least 20 billion cubic meters (bcm) to the EU annually by 2027, which will contribute to the energy diversification objectives of Europe. Azerbaijan is already increasing deliveries of natural gas to the EU, from 8.1 bcm in 2021 to an expected 12 bcm in 2022.

CONCLUSIONS: There is presently a unique opportunity to focus seriously on the development of the Middle Corridor. The economic potential in linking resource-rich, but landlocked, Central Asia and the resource-thirsty countries of Central and Eastern Europe remains mostly untapped, which can bring together the economic interests of pivotal states like Poland, Turkey, Ukraine, Romania, Georgia, Azerbaijan, Kazakhstan and Uzbekistan. If the hard and soft infrastructure elements can support increased transit volumes to lower the costs of transportation, thwe Middle Corridor will play a larger role in Asia-Europe trade. The expansion of Trans-Caspian connectivity and elimination of the transit bottleneck between the Eastern and Western shores of the Caspian should be a top priority.

It is in the interest of Kazakhstan, Uzbekistan and other Central Asian countries to build long-term strategic linkages with Azerbaijan, Georgia, Turkey and other Black Sea countries with common interests. However, it is also in the great interest of Europe to facilitate and support these linkages. The region has a significant potential to contribute to European and global energy and food security, and Europe can and must support this process by greater engagement and participation in transit projects, including by focusing on creative ways to expand the Three Seas Initiative. Adding the Caspian Sea to the consideration of Central and Eastern European economic, energy, digital, and broader infrastructure connectivity projects will increase the focus of the bureaucracy in this direction, and will stimulate private sector engagement.

ABOUT THE AUTHOR: Mamuka Tsereteli, Ph.D. is a Senior Fellow with the Central Asia-Caucasus Institute.

More in this category: « ISKP Attacks in Uzbekistan and Tajikistan Uzbekistan Between Ukraine and Russia: The Curse of Positioning »
back to top