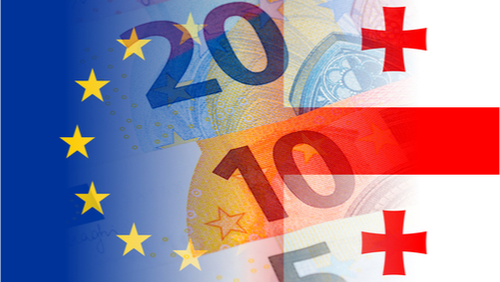 BACKGROUND: Georgia has long dreamt of becoming a member of the EU, a prospect closely tied to the country’s democratic development. For many years, any elections, reforms, or important political processes in the country have been under scrutiny of EU monitors. Along with several questions raised regarding the status of democracy under the ruling Georgian Dream party, Georgia is losing its traditional allies in the EU. Before the end of her term in office, Estonian President Kersti Kaljulaid said that Georgia, Ukraine and Moldova might need about 20 more years of reform to move closer to the EU. Estonia’s former president Toomas Hendrik Ilves, who is otherwise considered one of Georgia’s staunchest supporters, recently posted on twitter: “What the hell is the European Union flag – symbolizing democracy, human rights and rule of law – doing at a Georgian government press conference?” This would have been less surprising to Georgians if it had come from the Chancellor of Germany or the President of France, since the old EU members have always been skeptical about Georgia’s aspirations for membership in the EU and NATO. However, the Baltic countries have traditionally been considered Georgia’s main lobbyists in these organizations.

When recently attending an international conference in Georgia, Michel said that in 30 years, in one generation, the distance between the societies of Georgia, Ukraine and Moldova and the EU had shrunk considerably. A mistake in the translation during the live broadcast then posited that Michel said another generation was required to bridge the distance, giving rise to frustration among listeners in Georgia. There is general consensus in Georgia on the country’s objective of attaining membership in the EU. The political elite, the main political players, and the majority of Georgia’s population have actively supported the country’s accession to the EU. For example, according to opinion poll results released by the International Republican Institute on August 2, 2021, 83 percent of the respondents supported Georgia joining the EU, the most frequently stated motive being that EU membership would help strengthening the economy.

IMPLICATIONS: The statements by two former presidents of Estonia and Kaljulaid’s suggested timeframe of 20 years for EU membership sounds like a severe sentence for Georgia. Previously EU representatives have refrained from specifying any specific timeframe for Georgia’s possible accession to the EU – this happened for the first time through the president of a friendly country – Estonia. Nevertheless, the Georgian authorities seemingly do not yet realize the seriousness of the situation. Kakha Kaladze, Tbilisi Mayor and an influential member of the ruling party, said in response to Kaljulaid that “everyone shall mind their own country.”

Will it really take Georgia another 20-30 years to become part of the European family? It is ironic that the leaders of Georgia’s ruling party are increasingly confronting EU representatives and at the same time plan to apply for EU membership in 2024. They appear convinced that Georgia is successfully developing within the framework of the EU’s Eastern Partnership program after signing an Association Agreement with the EU and being awarded a visa-free regime with the countries of the Schengen zone. Although the previous Georgian authorities actively supported Georgia’s integration with Euro-Atlantic structures, a special article was added to the country’s constitution under the existing government, on Integration into European and Euro-Atlantic structures. The article reads, “The constitutional bodies shall take all measures within the scope of their competences to ensure the full integration of Georgia into the European Union and the North Atlantic Treaty Organization.” In May 2021, together with Ukraine and Moldova, Georgia established an associated Trio to accelerate European integration. All of these developments were overseen by the current Georgian authorities. These successes have perhaps caused complacency in the Georgian government, which appear captivated by the illusion of success.

The ambivalence in the Georgian government’s policies towards the EU, which on the one hand declare a desire for closer integration, but are on the other confrontational towards the EU and Euro MPs, risks turning Georgia into an unreliable partner. With reference to the controversy surrounding the 75 million Euro loan, conditioned on Georgia meeting political obligations, most prominently regarding judicial reform, Member of the European Parliament Viola von Cramon stated that the Georgian Government did not fulfill the conditions: “You can’t decline what you were not eligible for.” Georgian Prime Minister Irakli Garibashvili said in response, “A Member of the European Parliament is not my boss; my boss is the Georgian people.”

A recent scandal further undermined trust between the EU and Georgia. On May 13, Georgian media published the secret files of an anonymous source who claims to have served in the country’s security service in the department that monitored politicians, journalists, public figures, religious figures, and diplomats, including the EU Delegation to Georgia. Reports were published describing how the special services collected information about EU Ambassador Carl Hartzell and Ambassadors of EU countries (among others).

Relations between Georgia and the EU have approached unprecedented levels of tension in 2021 and several conditions are in place for the relationship to deteriorate even further. On October 1, Georgian authorities arrested the former President of Georgia Saakashvili, who left Georgia after Georgian Dream came to power and recently returned to the country unexpectedly just before the local elections. Saakashvili is the leader of the largest opposition party, the United National Movement, which received a solid number of votes in the recent local elections.

On October 14, a group of 70 European politicians issued a similar statement and demanded Saakashvili’s release. Among the signatories were former presidents of Lithuania and Ukraine, the former Prime Minister of Sweden, 25 MEPs from Sweden, France, Poland, Italy, Spain, Czech Republic, Croatia, Lithuania, Latvia, as well as former ambassadors, analysts, 25 deputies of the Lithuanian Sejm, as well as some Georgian politicians. On October 19, a group of MEPs made a similar statement, denouncing the prosecution as politically motivated and demanding Saakashvili’s release from prison.

In response, Garibashvili said, “No one will overstep the rule of law and justice in this country … There are seven hundred deputies in the European Parliament and we cannot act at [MEPs Anna] Fotyga or [Andrius] Kubilius’s behest. Some of the MEPs, they are acquaintances and friends of Mikheil Saakashvili.

Indeed, these reactions from Georgia’s leaders, which actively fuel tensions between the EU and Georgia, equip those EU countries who are skeptical about Georgia’s prospect of attaining EU membership with sound arguments.

CONCLUSIONS: Georgia’s domestic politics have never been as closely intertwined with the EU as they are now. At the early stage of Georgia’s independence, this small Caucasian country was a distant periphery to the EU, which it showed little interest. Gradually, the EU has become an active player in Georgia. On the one hand, the EU’s active involvement in Georgia’s political life clearly signals the EU’s engagement with Georgia. On the other hand, there is a risk that the EU will grow tired of the country’s permanent political crises and return to the indifference of the 1990s. The Georgian authorities have made fatal mistakes in relations with the EU, and risk turning Georgia from a successful country in the Eastern Partnership into a loser. The predictions of the two former Estonian presidents and the mistake made by the interpreter of Michel’s speech – that Georgia may need 20 more years, or one generation – of reform to move closer to the EU, could be a harsh but real sentence for Georgia.

More in this category: « After Afghanistan: What is the future of U.S. policy in Central Asia? The “Last Soviet Children” Complete Takeover of Kyrgyz Politics »
back to top