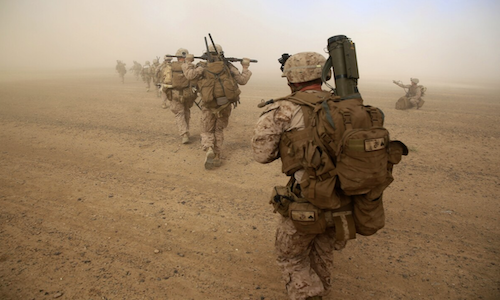 BACKGROUND: The killing of Major-General Qassem Soleimani, head of the elite Quds Force of Iran’s Revolutionary Guards, in a U.S. drone strike near Baghdad airport on January 3 has ratcheted up tensions in the Persian Gulf to unprecedented levels. Although the possibility of an all-out war between the two main adversaries, the U.S. and Iran, has receded somewhat for now, tit-for-tat strikes can be expected in the coming weeks and months. Indeed, within days of Soleimani’s assassination, Iran fired over a dozen missiles at airbases in Ain al-Assad in Iraq’s Anbar Province and at Irbil in the semi-autonomous Kurdish region. The two bases house U.S. troops.

The tit-for-tat strikes confirm apprehensions in the region that Iran and the U.S. will increasingly use third countries in the neighborhood as their battleground in the coming months. Afghanistan is understandably concerned over this prospect, fearing that the U.S. could launch attacks on Iran from Afghan soil and that Iran could target U.S. facilities based in Afghanistan. Should the U.S. and Iran target each other from Afghan soil or strike at each other’s assets in Afghanistan, Kabul will be dragged into the conflict.

Within hours of Soleimani’s assassination, Afghan President Ashraf Ghani tweeted to underscore his country’s neutrality in the U.S.-Iran conflict and stressed his opposition to Afghan soil being used “against a third country or in regional conflicts.” Should Iran and the U.S. use Afghanistan to settle scores, this would have detrimental implications for Afghanistan.

IMPLICATIONS: Soon after the U.S. strike that killed Soleimani, Iranian President Hassan Rouhani told Ghani in a telephone conversation that his government expects Iran’s “neighbors and friendly governments to unanimously condemn this evil, criminal act.” The message was clear: any move by Kabul that Iran perceives as siding with the U.S. would draw Iran’s ire and action.

Afghanistan thus faces a dilemma; the parties to the current conflict in the Persian Gulf are the U.S., a global superpower on which Afghanistan’s security, economy and reconstruction depends, and Iran, a regional power neighboring Afghanistan – the two countries share a border of 900 kilometers – which could create immense trouble for Kabul if it chose to do so. Kabul therefore cannot take sides in this conflict; drawing the ire of either Washington or Tehran could prove very costly for Afghanistan.

In addition to the possibility of missile strikes from Iranian territory, Iran can be expected to utilize its proxies in Afghanistan for attacks on U.S. targets. Although it was strongly opposed to the Taliban between the mid-1990s and mid-2000s, Teheran has now been supporting Taliban factions for over a decade, especially in the wake of escalating tensions with the U.S. over Iran’s nuclear program and the imposition of stronger sanctions on the country. It can be expected to step up the supply of weapons to friendly Taliban factions, and even use them to attack U.S. military facilities and personnel based in Afghanistan. Other potential Iranian proxies in Afghanistan include the Fatemiyoun Brigade, drawn from among Afghan Shia Hazara refugees in Iran, which operates under the aegis of the Quds Force and has been deployed to Syria. Iran could now divert this force to Afghanistan to target U.S. bases and personnel.

If Afghanistan would become a battleground between the U.S. and Iran, the strife-torn country can expect a further escalation of violence, adding a new dimension to the already complex Afghan conflict scenario. In its first media statement following Soleimani’s assassination, the Taliban maintained that the recent developments would not negatively impact the U.S.-Taliban peace process as the two sides had “finalized” a peace agreement that only needs to be signed.

However, even if the U.S. and the Taliban have reached a peace agreement, it remains to be seen whether it will hold. The exit of U.S. troops, whether gradual or precipitous, is an important precondition for the Taliban’s interest in and commitment to any deal with the U.S.

In the present situation, with the Persian Gulf in crisis, it is highly questionable whether the U.S. will be willing or able to leave Afghanistan. U.S. bases at Bagram as well as in Shindand and Herat near the Afghanistan-Iran border are likely to play a critical role in any armed conflict between the U.S. and Iran. Thus, giving up these bases or downsizing their personnel is particularly strategically problematic at this juncture. Even if Washington will not use these bases to fire missiles into Iran, its continued control over them is necessary to maintain pressure on Iran along its border with Afghanistan. Under these circumstances, it does seem that the U.S. will prefer to slow-walk the peace talks with the Taliban. A quick agreement with the Taliban on a withdrawal of U.S. troops thus hangs in the balance.

Afghanistan’s emergence as a battleground in the U.S.-Iran conflict would have negative consequences for Iran. It would trigger another wave of Afghan refugees to Iran along with numerous costs, inflicting an additional financial burden on Iran’s already weak economy. It would also inflame conflicts in Iran’s already restive eastern provinces. As for the U.S., its hopes of withdrawing troops from Afghanistan would diminish significantly if the security situation worsens.

CONCLUSIONS: The prospect of Afghanistan becoming a battleground in the current Iran-U.S. conflict is fraught with grave consequences not only for Afghanistan, which would see a severe escalation in violence, but also for the U.S. and Iran. In the short-term, both actors may see advantages in taking their fight to Afghanistan, including a larger number of U.S. nationals and facilities that Iran could target and established bases that the U.S. can utilize to project additional military power against Iran. However, in the medium to long-term, a renewed escalation of war in Afghanistan will inflict heavy costs on Iran as well as the U.S.; Afghanistan will become an even deeper quagmire for all parties involved.

Dr. Sudha Ramachandran is an independent researcher and journalist based in India. She writes on South Asian political and security issues. Her articles have been published in Asia Times Online, The Diplomat, China Brief, etc. She can be contacted at This email address is being protected from spambots. You need JavaScript enabled to view it. .

More in this category: « China's Soft Power in Central Asia Armenia's Post-Revolutionary Government Seeks to Speed up Reform »
back to top