During the Astana Financial Days event in July 2018, President Nursultan Nazarbayev of Kazakhstan announced and personally endorsed the opening of the Astana International Financial Center (AIFC). He envisions that the AIFC will provide financial services “not only for Kazakhstan, but also for the whole world.” If successful, the AIFC can contribute to diversifying the financial resources for Kazakhstan’s national and international projects. Through its proper implementation, the government of Kazakhstan can develop a tool for improving collaboration with neighboring countries in Central Asia in the industrial, agricultural and tourism sectors, making the Central Asian section of the Silk Road more attractive for business and financial deals. In addition, the Center can become a real financial hub not only for Kazakhstan and Central Asia but also for the wider Eurasia region if it is capable of attracting enough financial resources from large international players. 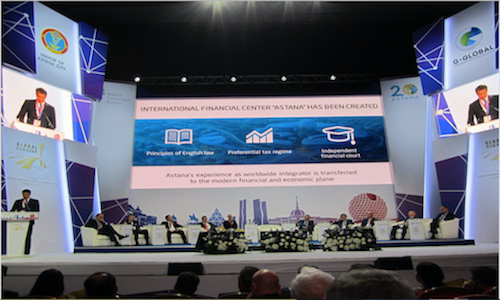 BACKGROUND: The AIFC has been established out of the necessity to revitalize economic cooperation and technological exchanges, expanding them from the Central Asian markets to the wider markets of the so-called Silk Road Belt region. Indeed, for almost two decades policymakers in Kazakhstan and Central Asia have been talking about the need to stimulate regional economic integration – especially in the area of regional and international infrastructures. Yet, the political will and joint declarations did not lead to concrete large-scale joint regional projects or joint ventures, despite the long history of effective collaboration in the 20th century and the obvious need to develop an “economy of scale” by enlarging national projects into joint regional schemes to become competitive in the international arena. The main obstacle often has been – among other things – a lack of adequate capital and financial resources for funding such projects.

The China-led Silk Road Economic Belt (SREB) program could become a solution, providing financing for several large-scale infrastructure projects connecting China with Europe via Kazakhstan. In addition, Beijing has offered several loans to the government of Kazakhstan during the difficult years of oil revenue decline and actively participated in the privatization program, investing about US$ 28 billion during the past five years. The “One Belt, One Road” (OBOR) program and the Asian International Infrastructure Bank (AIIB) have helped to create a foundation for financing some projects in the region. However, these initiatives are more focused on a series of infrastructure mega-projects and significantly less on working with private sector institutions, such as the myriad of so-called “bamboo capitalists” – small and medium businesses.

IMPLICATIONS: The significant rise in the Chinese presence within Kazakhstan’s economy and financial system has led Astana to take a number of steps toward diversifying its portfolio of international investors. While the government of Kazakhstan welcomes investments, infrastructure and business development with its Chinese counterparts, it has clearly highlighted its quest for diversifying investments, building its very own, internationally competitive financial system and raising capital directly in the international financial markets.

For almost three years, a team of Kazakh government officials and local and international experts have been working closely with several international and transnational financial institutions, such as NASDAQ, Shanghai Stock Exchange, London Stock Exchange and many others to develop a unique project – the AIFC. They have developed an exclusive regulatory system introducing changes in the national constitution, among other things, investing almost US$ 400 million in funding and large business space transfers to the AIFC. The preparation work of the team has included three major aspects of additional legal regulatory changes.

First, the entire functioning and all activities of the Center would be outside of Kazakhstan’s legal regulation, and would be conducted under British law. Second, the introduction of a special system of preferences and regulations in taxation, currency exchange and currency movements as well as a special visa immigration status for the AIFC. Third, Astana’s commitment to continue its national privatization program using the AIFC platform. To this end, the government has committed itself to holding Initial Public Offerings (IPOs) of more than US$ 34 billion within the next few years, including privatization of such national business jewels as Samruk-Energy, Kaz-Post, as well as privatization of major enterprises currently under the control of the Ministry of Transportation and the Ministry of Energy.

The AIFC’s managing team has worked hard to promote its image by launching a global information campaign and organizing a series of conferences and seminars in Astana during 2017 and 2018. It has attracted the attention of financial top-players from the U.S., such as NASDAQ and Goldman Sachs, who agreed to work with their partners in Kazakhstan on conceptualizing and establishing the AIFC.

The government of Kazakhstan foresees that through collaboration with leading international partners, the AIFC will gain access to the latest technologies and know-how in working with various financial instruments at the national, regional and global levels. This is especially important as Kazakhstan has launched a new round of reforms dubbed Industrialization 4.0 moving towards a service-driven economy, and envisions itself as a financial hub for neighboring countries in Central Asia, the Caucasus and even the Middle East.

However, the opinions of Kazakh experts on the AIFC are divided. Some believe that the Center has the potential to become one of the essential pillars on the Silk Road, serving as a financial bridge between China and Europe. For example, AIFC Director for Asset & Wealth Management, Timur Onzhanov, declared that this organization could become one of the key financial institutions on the Silk Road, bringing in between US$ 4 and 10 billion of financial capital by attracting Foreign Direct Investments (FDIs), international bonds, and other forms of finance. Others raise questions about the viability of the entire project and the need to reassess the financial, political and technological risks involved in the AIFC becoming a competitive financial hub capable of challenging long-established financial institutions in Shanghai, Beijing and Moscow.

CONCLUSION: In this regard, Astana should take the lead in overcoming “economic nationalism” and embracing more collaboration with neighboring Kyrgyzstan, Turkmenistan and Uzbekistan. Finally, yet importantly, the government of Kazakhstan should reconceptualize the current form of regionalism, taking into consideration the new realities and trends emerging upon the completion of the major SREB infrastructure projects and moving away from the commodity-exports driven economic development. Kazakhstan should also train a new class of financial talents from both Kazakhstan and Central Asian states as professionals capable of handling financial instruments, wealth and assets management not only for individual states, but also for regional projects. Also, the success of the AIFC will lie in its ability to develop effective working relationships not only with large international players but also with international small and medium enterprises (SMEs) able to attract technologies and investments, create jobs, and move goods and services.

Rafis Abazov, PhD, is a visiting professor at Al Farabi Kazakh National University and a director of Ban Ki-moon Institute for Sustainable Development. He is author of The Formation of Post-Soviet International Politics in Kazakhstan, Kyrgyzstan and Uzbekistan (1999), The Culture and Customs of the Central Asian Republics (2007), The Stories of the Great Steppe (2013) and some others. He has been awarded an IREX 2010–2011 EPS fellowship (Title VIII program) for research on public policy reforms in Kazakhstan.

More in this category: « What Would Membership in the CSTO Mean for Azerbaijan and the South Caucasus? Towards a Central Asia and Caucasus Trade Bloc for Belt and Road »
back to top