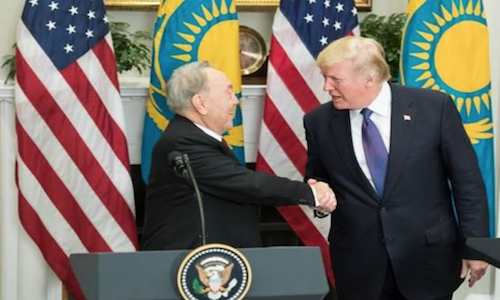 BACKGROUND: Since the start of Operation Enduring Freedom in Afghanistan, the U.S. has used several air and ground routes for supplying troops to there. Despite Moscow’s official support for U.S. counterterrorism operations after 9/11, Russia has considered U.S. use of military bases or territories in Central Asia and the Caucasus as a threat, and has sought to control these countries’ military cooperation with the U.S. while simultaneously temporarily allowing Russian territory for transportation. A decree signed by Prime Minister Dmitry Medvedev in June 2012 allowed NATO to use “combined transit” routes in addition to ground transit – including railway, air and road.

To accommodate the increased need for non-lethal supplies to Afghanistan after 2009, and to reduce reliance on supply lines though Pakistan, U.S. planners opened the Northern Distribution Network (NDN), a series of commercially-based logistical arrangements connecting Baltic and Caspian ports with Afghanistan via Russia, Central Asia, and the Caucasus.

Even as Russian officials supported the NDN, it has remained controversial in Russia, and has been the subject of protests from several nationalist groups as well as part of the public. For example, the plan to create a NATO transit logistic center in Ulyanovsk in 2012 triggered public protests in the city. After Russia’s intervention in Ukraine and the subsequent Western sanctions, the Russian government closed the Russian part of the NDN in 2015.

President Trump’s decisions to increase the U.S. military contingent in Afghanistan, pursue further U.S. sanctions on Russia and suspend military aid to Pakistan have highlighted the need for expand the alternative transit route running from Georgia through Azerbaijan, across the Caspian Sea to eastern Kazakhstan and into Uzbekistan, which has railway connections with northern Afghanistan. Indeed, Afghanistan was a main topic of the January 2018 meeting between the U.S. and Kazakh presidents.

The Kazakh parliament’s ratification in April of amendments to the agreement on the use of Kazakh ports by the U.S. military in the Caspian Sea caused concern among Russian experts and media, triggering a campaign to denounce “Astana’s betrayal ploy.” Since then, a frightening prediction of the future appearance of U.S. military bases in the Caspian Sea have appeared in a number of Russian media outlets. In these reports, the decision of Kazakhstan’s Senate to approve the U.S. Navy’s use of the Aktau and Kuryk ports for transiting special cargo to Afghanistan will turn the ports into “bases of the Pentagon and its allies.” They emphasize that Kazakhstan’s current turn towards the U.S. is anti-Russian and that the prospect of U.S. ships carrying military or non-military cargo in the Caspian basin is highly undesirable. The route through Black Sea ports to Azerbaijan and to the Caspian Sea is depicted as completely “illogical” logistics, rendering the current agreement a “military-political promotion of American interests.”

IMPLICATIONS: While the related protocol was signed in 2017, U.S.-Kazakh talks about the possibility of using the Aktau port of as a transit point started in 2013. Moscow is concerned that the agreement will increase Washington’s role in the region and that U.S. assistance could provide for a strengthened Kazakh navy that would challenge Russia’s own naval presence in the Caspian.

Conversely, Astana seeks to balance its foreign policy in order to mitigate Russia’s dominant role in Kazakhstan’s internal and external security. Moreover, despite Kazakhstan’s membership in Russia-led political and military organizations, Astana has since independence sought to maintain productive political and economic relations with the West. After the downturn in cooperation between the West and Russia and the introduction of Western sanctions, Astana’s ability to retain relations with the U.S. and the EU has become even more important. Astana therefore considers the new transport project as an affordable opportunity to increase cooperation with the United States.

Russia considers the Caspian Basin as vital to its geopolitical interests and continues to strengthen its power projection in this region. Since 2010, Moscow has sharply increased its military presence in the Caspian Sea and is modernizing its Caspian Flotilla, which will in 2021 be reinforced with six new warships. The Ministry of Defense also plans to complete the construction of a military port in Kaspiisk, Dagestan by 2020. According to Defense Minister Sergei Shoigu, the Caspian Flotilla will move its main base from Astrakhan to the new port, which is closer to the central section of the sea.

The Caspian’s military strategic importance is highlighted by its direct adjacency to the Caucasus and Central Asia and close proximity to the Middle East. As demonstrated during the Russian operation in Syria, the Caspian Sea is a safe area from which to launch cruise missiles – the so-called “bastion” strategy. Therefore, with support from Iran, Russia has actively sought to keep the Caspian inaccessible to third actors.

Naturally, an additional factor is the wealth of oil and gas resources under the Caspian seabed and the prospect of linking Central Asia to the existing transit corridor for energy shipments from the South Caucasus to the West, a project strongly promoted by the West but opposed by Russia.

Moscow could potentially use several means for pressuring Astana to refrain from expanded security cooperation with the United States. These include the Russian or Russian-speaking community of Kazakhstan, along with socio-economic and political tensions in Kazakh society that could undermine the regime. Moreover, days before the decision of Kazakhstan’s Senate, Russian officials and media again highlighted the Lugar laboratories in Kazakhstan, Azerbaijan and Georgia, which are located on the planned transportation routes. Maria Zakharova, the Russian foreign ministry’s press secretary, stated that “the very fact of the large-scale medical-biological activities of the Pentagon on the borders of Russia” is of particular concern for Moscow. These biological research laboratories were built as part of the Nunn-Lugar Biological Threat Reduction program, named after the U.S. Senators initiating them. The program was intended to dismantle the former Soviet Union’s massive biological weapons research, and to prevent the proliferation of expertise, materials, equipment and technologies that could contribute to the development of biological weapons in Russia, Kazakhstan, Uzbekistan, Georgia, Azerbaijan and Ukraine. According to Moscow, these laboratories are conducting research that could potentially be used for the production of bacteriological weapons, while the transfer of information and samples of pathogens to the U.S. could disclose not only Soviet, but also Russian military and biological secrets. Thus, these activities threaten Russia’s military interests. These “military-biological” labs near Russia are described as external threats in Russia’s latest National Security Strategy. It should be noted that the EU External Action Service’s “EU vs Disinformation” website has repeatedly raised attention to Moscow’s allegations concerning Lugar laboratories, as these are not backed up with evidence and lack a basis in fact. Lavrov explicitly linked the laboratories to U.S. transit though Kazakhstan during the CSTO meeting, indicating that Zakharova’s statement was a warning to all hosting countries.

CONCLUSIONS: Kazakhstan faces a challenge in balancing its foreign relations between Russia, China and the U.S., especially in the face of an upcoming leadership succession in the country. Moreover, the recently signed Caspian Convention allows Moscow legal leverage to prevent military activities of non-littoral states in the Caspian Basin.

More in this category: « Is Armenia's Foreign Policy Changing? UNGA Adopts Resolution on Strengthening Cooperation in Central Asia »
back to top