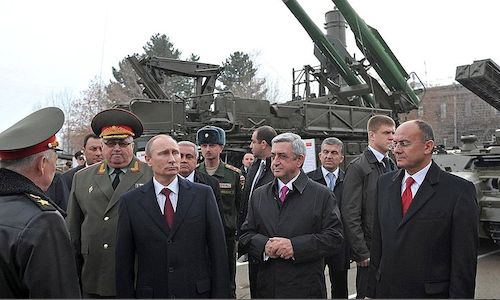 BACKGROUND: Whereas these recent developments have primarily concerned the legal status of the joint Armenian-Russian ground forces, the first exercises combining Armenian and Russian troops were conducted as early as 1995 and 1998. The core task of these drills was to enhance collective interoperability with the tactical focus of repelling a simulated enemy assault on Armenia from “the West.” The March 1995 Russian-Armenian strategic agreement on the deployment of a Russian military contingent has long guided the operative-tactical tasks of such joint exercises. Furthermore, in 2000 the allies signed a bilateral accord on joint utilization of available troops in the event of an impending military threat. Moscow and Yerevan then ramped up the process of force unification, conducting various joint drills on a regular basis. A recent large-scale exercise, involving roughly 4,000 troops along with tanks, artillery systems, helicopter gunships, and other military aircraft, took place in September 2014 at the Alagyaz polygon.

Troops from the 102nd Russian base and Armenia’s 5th Army Corps appear to constitute the core of the redesigned joint Russian-Armenian ground force. Moreover, it can be assumed that the recently dispatched Iskander-E short-range ballistic missile systems showcased at the military parade in Yerevan will be drawn into a joint force. It is also reported that the joint force will be reinforced with an air defense component, plausibly by integrating the previously formed Russian-Armenian air defense network.

The joint force is deployed along the border with Turkey and also constitutes a strategic headquarter reserve. Yet, it is structurally subordinated to Russia’s SMD Supreme Command. The formal commander of the combined force is Armenian Maj. Gen. Andranik Manukyan, a former chief of Armenia’s 4th Army Corps who reportedly has a pro-Russian mindset. He was appointed by President Serzh Sargsyan in July 2016, with previous approval from the Russian side.

Armenian and Russian military officials met on multiple occasions in 2015-16, aiming to speed up the institutional integration of the Armenian and Russian armed forces. The united air defense system along with the combined task force now constitute the key components of both the Armenian-Russian security relationship and Armenia’s membership in the Russia-led Collective Security Treaty Organization (CSTO).

IMPLICATIONS: Russia has established a significant influence in almost all dimensions of Armenia’s political-social life. The Armenian leadership long believed it could comprehensively deepen bilateral ties with Russia, and rely heavily on Moscow in national security matters, while simultaneously developing ties with the West. History has invalidated this assumption.

Russia’s coercive diplomacy to keep Armenia firmly within its orbit has contributed to Yerevan’s international isolation and the country’s lasting economic decline. The insecurity of Armenia’s political establishment, facing threats both to the country per se and to their hold on power, has played into the Kremlin’s hands.

Concerned over regime change scenarios, Moscow likely calculates that the joint Russian-Armenian land force emphasizes Russia’s “indispensability” in the eyes of the Armenian public in light of multiple external threats to the country, and it is unlikely that Moscow envisions using the joint force to prevent unrest similar to Ukraine’s Euromaidan. However, against the backdrop of the reinforced anti-Russian moods in Armenia since the April fighting with Azerbaijan – and the seizure of a police station in Yerevan by armed insurgents in July – Moscow appears to hedge its bets. Cluster 1 of the Russian-Armenian agreement founding the joint task force, outlines the role of the joint force as providing security assurance “from external and internal military threats,” thereby echoing Moscow’s apprehensions about the recent and ongoing tensions in Armenia.

The pivotal point, however, lays in regulation III, noting that in case of an “imminent threat of aggression and in wartime the unit will be put under direct command of Russia’s SMD amid Armenia’s formal consent.” This implies that Moscow can potentially apply to use the joint Russian-Armenian force if any incident with NATO in the Black Sea (e.g. involving Turkey or Georgia) is assessed as an “imminent threat of aggression” vis-à-vis Russia.

From Armenia’s perspective, regardless of Yerevan’s setback with Euro-integration in 2013 and amid the enduring Russia-West standoff, the military is a core pillar of the country’s security and sovereignty, which still retains practical and political ties with NATO. Yet if Putin proceeds with his plans for Armenia, the Armenia-NATO partnership almost certainly will run into a dead-end. Even though Armenia is nominally a NATO partner, Moscow could in the foreseeable future benefit from this momentum, using Armenia’s ties with NATO against the Alliance.

Russia’s playbook on Armenia was adapted to fit the logic of confrontation with the West, meaning a point of no return for Armenia’s path towards Euro-integration. As predicted, Russia was deeply involved in the reshuffle of the Prime Minister’s cabinet, which explains the appointment of several former Gazprom functionaries to minister posts. Meanwhile, via local collaborators Moscow promotes the claim that Armenia “has no alternative” to deepening its damaging integration with Russia. Another common feature of Russian propaganda aimed at the Armenian public is the notion of an impending Turkish invasion, necessitating a reinforcement of Armenia’s armed forces with those of Russia.

In fact, the joint command structure represents a practical vehicle for intervention or an actionable lever to undermine Armenia’s MoD reforms, as the joint force requires standardization. Armenian army units, at least those involved in the joint force, should meet Russian standards, hence rolling back NATO-backed reforms in Armenia’s defense sector.

Yet the Kremlin’s increased control of Armenia’s armed forces poses an even more serious risk, for two reasons. First, it will reinforce Armenia’s dependence and subordination to Russia, further undermining Armenia’s ability to make independent policy decisions. Above all, it opens for Russia’s utilization of Armenia’s infrastructure, communications and assets, entailing political and strategic benefits for Russia at the expense of Western interests in South Caucasus.

Second, Russian officials have repeatedly protested Georgia’s aspirations to join NATO, terming the establishment of a NATO training and evaluation center in Georgia a “threat to Russia’s interests and regional security.” Accordingly, the increase of Russian military prowess in Armenia leads to an increased risk of hybrid threats to both Armenia and Georgia. Since the limitations to Russia’s troop deployment in Armenia were abolished by the prolongation in 2010, Russian forces could be used either like in Crimea – threatening Yerevan and Gyumri in case of social unrest; or for an unexpected provocative incursion into Georgia. The joint task force also increases the risk of entangling Armenia into adventurism against Georgia, NATO or in the Middle East. Similar agreements are in force with Belarus as well as with Abkhazia and South Ossetia. Abkhaz, South Ossetian and Armenian joint forces are placed under the supreme command of Russia’s SMD Staff. Thus, the Russian moves in Armenia imply risks for Georgia’s security, by the prospect of a threat from Armenia.

CONCLUSION: Against the backdrop of increasing anti-Russian moods among the Armenian public, fueled by Russia’s “balancing” policy towards the Armenia-Azerbaijan conflict, Moscow has presented both the joint air defense and ground forces as designed to serve Armenia’s security in order to discredit concerned voices. In addition, the disaffection among a wide segment of Armenian society presents an increasing risk to the continued rule of Armenia’s political elite, which is broadly perceived as Russia’s critical client in the region. While the authorities and biased experts in Yerevan spare no efforts to promote the Russian-Armenian joint force, it is obvious that the process aims to eventually “Russify” Armenia’s armed forces, in order to serve Russia’s regional interests.

Therefore, Russia’s efforts to turn Armenia into a proxy should not be underestimated by politicians and experts based in Washington, Brussels and London, as it cannot be ruled out that Armenia could be embroiled in one of Russia’s military adventures in the mid-term future.

AUTHOR’S BIO: Eduard Abrahamyan, is a defense and security analyst and researcher at the University of Leicester, UK. His expertise is on NATO’s strategy evolution and adaptation in the Eastern Europe and Black Sea regions.

More in this category: « Karakbakh negotiations on hold as Armenia gears up for parliamentary elections Deeper Afghanistan-India cooperation must not isolate Pakistan »
back to top