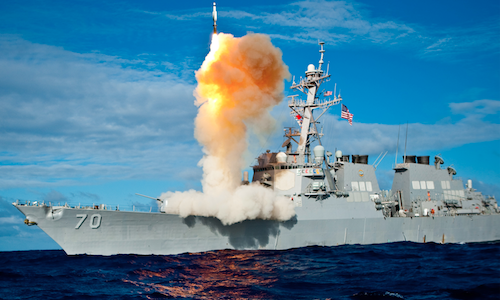 BACKGROUND: The Black Sea, intersecting Europe, the Middle East and Central Asia, is important for both strategic military and economic reasons yet remains the most vulnerable part of NATO’s eastern flank. Following the annexation of Crimea in 2014, Russia started a wide-ranging and large-scale militarization program, which will allow Moscow to establish a dominant position in the basin. An elaborate military infrastructure is under construction in Crimea to combat air and surface threats, aiming to create an anti-access/area denial bubble (A2/AD) to hinder NATO’s ability to protect its littoral member states and deliver military assistance to its partners in the region. Russia also seeks to increase its military reach into adjacent regions such as Central Europe, the Balkans, the South Caucasus, the Eastern Mediterranean and the Northern Middle East. Russia’s military build-up can be used to disrupt maritime trade and energy routes, which will negatively affect the economies of the Black Sea littoral states and threaten the European energy diversification scheme.

Russia’s Black Sea Fleet is a strategic pillar of this military arrangement and has been undergoing a modernization worth 20 trillion rubles (US$ 2.93 billion) since 2014. Most recently, Russia deployed three new surface warships in the Black Sea – Admiral Grigorovich-class frigates. These advanced vessels, which are heavily equipped with Kalibr cruise missiles and other anti-aircraft and anti-ship missiles can combat air, surface and submarine threats. In total, the Black Sea fleet is expected to receive 30 new vessels of various sizes and classes including six Bykov-class patrol ships, three additional Admiral Grigorovich-class frigates and nine Project 21631 small guided missile corvettes by 2020.

The Russian Black Sea Fleet is only a fraction of Russia’s military power in the Black Sea. Aside from the naval component, Russia is systematically developing air bases and has already dispatched 10 Tu-22M3 Backfire bombers, along with patrol and anti-submarine aircraft in Crimea. The peninsula is also equipped with missile and coastal defense systems such as the S-300PMU surface-to-air missile system and the K-300P Bastion-P anti-ship missile complex. Additionally, in early August Russia deployed its most advanced anti-aircraft and missile defense system S-400 in Crimea.

IMPLICATIONS: Despite alarming statements from littoral member states, NATO has over the last two years failed to create a sufficient security architecture in the Black Sea basin. After the latest NATO summit in Warsaw, the alliance is expected to move from reassurance to actual deterrence or defense measures vis-a-vis Russia to reinforce NATO’s eastern flank, which also encompasses the Black Sea region. The allies decided to deploy a Romanian-led NATO multinational framework brigade based in Romania and NATO will further discuss air and maritime options for enhancing its collective presence in the Black Sea region in the post-summit ministerial meetings. These possibilities are not yet specified, but the Alliance might start air or sea patrol missions or further increase the number or scope of joint naval exercises in the Black Sea.

Furthermore, the allies declared NATO Ballistic Missile Defense (BMD) initial operational capability. This is an important step in developing the Alliance’s anti-missile capability, which can be used to defend Black Sea riparian member states against a ballistic missile attack. The U.S. and NATO BMD initiative included opening the ballistic missile defense site Aegis Ashore, located in Deveselu in Romania, in May this year. The Aegis Ashore facility will complement the early-warning BMD radar at Kürecik in Turkey to ensure anti-missile security in the Black Sea.

NATO also envisages enhancing dialogue and cooperation with the Black Sea riparian partner states Georgia and Ukraine. Georgia did not receive a long-sought Membership Action Plan, but NATO proposed alternative ways to enhance the existing Substantial NATO-Georgia Package, and expressed readiness to include Georgia in joint defense measures in the Black Sea. Furthermore, the summit approved granting Ukraine a new comprehensive package to assist the country in reforming its defense and security sectors. NATO invited Ukraine to participate in its “Sea Breeze” naval exercises, which took place in mid-July. Kiev also recently signed a military cooperation plan with Turkey, which among other areas of cooperation envisages joint naval maneuvers and joint patrol missions along their costal lines.

The final communique of the summit shows that NATO prioritizes reinforcement of the northern sector of the eastern flank (the Baltic Sea region) rather than its south-eastern part (the Black Sea region). Measures proposed for the latter are more limited in scope and capability than those envisaged for the Baltic Sea. NATO decided to deploy four multinational battalions on a rotational basis in Poland and the Baltic States with participation of key NATO members such as the U.S., Canada, the UK and Germany. Meanwhile, the allies are currently ready to dispatch one multinational brigade in the Black Sea region, with Romania as the framework nation and host country. So far, only Bulgaria and Poland have declared readiness to send troops to contribute to the brigade.

The imbalance in the measures proposed on the respective eastern frontier sections can be explained by the lack of a coordinated effort from Black Sea littoral NATO member states to bring attention to the security of the basin. Poland and the Baltic States have made persistent diplomatic efforts to bring NATO forces to the region, which were eventually backed by the rest of the Visegrad Group, though the Czech Republic, Slovakia and Hungary did not ask for an enhanced collective presence on their territories and do not perceive Russia as a major security threat. The three Black Sea littoral NATO member states were unable to develop a joint stance on addressing the region’s security needs. In this regard, Romania was the most active and proposed several initiatives such as setting up a Romanian-led NATO multinational brigade, establishing a multinational flotilla and naval patrols in the Black Sea under NATO auspices. Additionally, Romania proposed a regular trilateral format of joint naval exercises in the Black Sea, along with Turkey and Bulgaria, with the eventual participation of non-littoral NATO members.

Bulgaria shares Romania’s security concerns but is reluctant to antagonize Moscow by pointing out Russia as a major security threat in the basin and anxious of further militarization of the Sea. Sofia supports deploying a NATO multinational brigade to Romania and is ready to participate in it by sending 400 troops. Nevertheless, Bulgaria did not back the idea of establishing regional joint naval exercises with Romania and Turkey because it prefers a wider format with participation of the other NATO allies.

Before the summit, Turkey expressed concerns about Russia’s increasingly offensive posture in the Black Sea, yet Ankara did not endorse any of Romania’s propositions. Ankara has traditionally been reluctant to establish collective NATO defense mechanisms in the region and is currently seeking to mend ties with Russia, which were severed after Turkey downed a Russian warplane last November. Furthermore, Turkey is currently dealing with internal instability in terms of a continual terrorism threat and the aftermath of the coup attempt on July 15-16. In reaction to the failed putsch, the Turkish government has undertaken a wide-ranging purge in the military and security forces, which could significantly weaken Turkey’s defense capabilities.

CONCLUSIONS: The decisions taken at NATO’s Warsaw Summit are important steps, but will not entail a significant change in the existing imbalance of power vis-a-vis Russia in the Black Sea region. NATO’s proposed collective activities in the region do not match Russia’s growing military posture, neither do they correlate with the level of deterrence and defense measures envisaged for the Baltic Sea region. In addition, NATO failed to formulate a tangible proposal for its riparian partner states such as Georgia, which has long sought to upgrade its partnership with the alliance. In addition, NATO’s recently announced deterrence measures did not prevent Russia from strengthening its military posture in the basin. On the contrary, Moscow is currently deploying additional military hardware to Crimea and escalating tensions with Ukraine over allegedly attempted terrorist attacks in Crimea by Ukrainian security services.