After the ruble crashed in 2014, the Kyrgyz Central Bank (KCB) prevented Kyrgyzstan’s national currency, the som, from depreciating in tandem with the Russian currency. Given Kyrgyzstan’s ascension into the Eurasian Economic Union (EEU) and the country’s heavy reliance on remittances from expatriates living in Russia, the KCB’s decision to maintain a relatively strong Kyrgyz currency seems counterintuitive. However, the stable som policy is predicated on long-term structural changes in trade patterns toward China. With the Chinese currency tied to the U.S. dollar, the decision to keep the som stable is based more on central bank policies in Washington and Beijing than in Moscow. 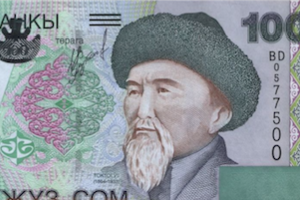 BACKGROUND: Until the end of 2013, the KCB managed its exchange rate to shadow the ruble’s movement on international currency markets. The currencies’ rates were highly correlated to reflect the close financial and economic ties between Russia and Kyrgyzstan. In 2014, the ruble crashed because of the rapid decline in energy prices and international sanctions over the annexation of Crimea. That was a turning point for the KCB’s exchange rate management. Rather than participate in the devaluation, the KCB has kept the som stable in real terms. The som has depreciated a modest 1.5 percent since 2013. The ruble declined 18 percent over the same period.

The most important reason for the stable-som policy is trade. The Kyrgyz economy relies on Russian oil; when its price collapsed, energy imports became significantly cheaper. At the same time, the price of Kyrgyzstan’s main export commodity, gold, remained relatively flat. The combination of less expensive imports and robust exports empowered the KCB to support the som’s value. After Kyrgyz ascension to the EEU in 2015, the relatively stronger som placed the country’s non-gold-related exporters at a comparative disadvantage to much of the trading bloc. However, the KCB was more focused on Kyrgyzstan’s largest trading partner, China. In 2014, that country accounted for 55 percent of Kyrgyzstan’s imports, the majority of which consisted of consumer products generally unavailable from Kyrgyzstan’s EEU partners. By keeping consumer goods prices stable, the KCB has also avoided inflation.

For individuals, the decoupling of the som and ruble has had an uneven affect across the country. While consumer goods and energy have remained affordable, households dependent on remittances from family members working in Russia experienced an acute decline in disposable income. Overall, Kyrgyzstan is highly dependent on remittances, which account for up to 30 percent of the country’s GDP, but not all regions are equally affected. Southern areas are more reliant on remittances, and communities with few local employment opportunities and systemic poverty are disproportionally influenced by a weakened ruble. In contrast, households associated with gold mining, retail goods and services, and domestically produced and consumed goods and services have fared better with a stable som.

IMPLICATIONS: Kyrgyzstan has an open economy, which attenuates the effects of specific government policies. Regional and global forces buffer the domestic economy, and no decision is made in a vacuum. Exchange rate management is no exception with entry into the EEU complicating this task in some unexpected ways. For the 1 million Kyrgyz expatriates, the stable-som policy has made working in Russia relatively less attractive; however, the economic union has ushered in a stronger labor regulatory framework for migrant workers. Better working conditions and reduced permit requirements have generated higher levels of net labor migration to Russia. To offset the weak ruble and exchange rate risk, more than a quarter of remittances are made in U.S. dollars. These factors combine to indicate stronger integration with Russia’s labor market regardless of the economic disincentives created by a stable som.

Domestic employment opportunities in export industries may also not be gravely affected by the weaker ruble. While the gold industry essentially operates autonomously within the economy, with production sent directly to Switzerland, the large agricultural sector can find a niche providing fruits and vegetables to Russia. The 2014 sanctions imposed by major global producers have forced Russia to seek new sources for both raw and processed foods. Kyrgyzstan’s climate is favorable to supplying Russian consumers with traditional goods. The sanctions have provided an artificial economic advantage to Kyrgyz agricultural interests; should they be lifted, Kyrgyz producers may again be forced to compete on price and quality.

The Kyrgyz government benefits from a som that doesn’t depreciate because the country carries a high amount of external debt denominated in U.S. dollars. These obligations are more easily repaid, and doing so frees up resources for other fiscal programs. Economic growth tends to be higher in times of economic stability, and the World Bank and International Monetary Fund have forecast more robust growth in Kyrgyzstan than in the other large EEU members. A credible and well-managed exchange rate policy is also a strategic diplomatic tool with trading partners.

China’s ascendancy as Kyrgyzstan’s main trade partner is driven by two primary factors: domestic consumption of consumer goods and the re-export of products to EEU and other neighboring countries. From a practical standpoint, China’s geographic propinquity and diverse selection of higher quality manufactured goods make the two natural trading partners. One-fifth of the Kyrgyz domestic labor force is somehow connected to the re-export of these Chinese goods. Products are funneled into two main bazaars, repackaged, and sent abroad. In order for this trade to continue, the som must maintain its purchasing power relative to the yuan. The EEU’s common external tariff has raised prices somewhat, causing official re-export trade to be reduced by half. However, the IMF projects steady and consistent re-export growth from current levels through 2020. There are no statistics for unofficial trade, and given the efficiency and effectiveness of repackaging operations, the true volume of trade is probably much higher. A stable currency assists in the continuation of trade in general.

From a broader perspective, the stable-som policy indicates that Russia doesn’t possess economic hegemony over Kyrgyzstan. Despite Russia’s US$ 1 billion economic growth and stabilization loan, which it granted Kyrgyzstan as an incentive to join the EEU, many factors of production are denominated in som and yuan. Almost three-quarters of the foreign nationals working in Kyrgyzstan are from China, and the costs for many intermediate goods are paid in yuan. Certainly Kyrgyzstan’s economy is extensively linked to Russia’s, but the country can manage that relationship through its own exchange rate policy.

CONCLUSIONS: The stable som is likely to remain a cornerstone of KCB policy. Russia’s twin problems of sanctions and low energy prices have allowed the Kyrgyz to decouple their currency from the ruble. Kyrgyzstan can carve out new export markets within the EEU despite a relatively strong currency. Labor remittances are partly made in U.S. dollars, thus abating the cost of currency fluctuations. From the Kyrgyz government’s perspective, U.S. dollar-denominated foreign obligations are easier to repay. Most importantly, China’s emerging role in the Kyrgyz economy is the prime reason for an independent currency policy. Kyrgyzstan now sources the majority of its imports – mainly consumer goods unavailable in the EEU – from China. The yuan’s exchange rate is the pivotal factor in Kyrgyz retail prices, and with the Chinese currency tied to the U.S. dollar, Kyrgyz consumers essentially face prices in the U.S. currency. A competently managed stable som facilitates evenly priced factors of production and fuels re-export industries. Ultimately this foreign exchange policy benefits Kyrgyzstan’s economy as the country charts its own economic path.

AUTHOR'S BIO: Tony Pizur received his doctorate in economics from the International University of Kyrgyzstan. He currently teaches economics and business in the U.S. and consults on education and international business issues.

More in this category: « Uzbekistan and South Korea: towards a special relationship Iran and Russia coordinate in the South Caucasus: a prelude for a greater game? »
back to top