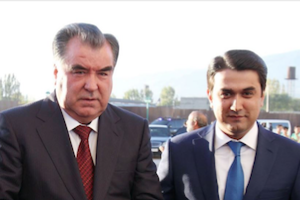 BACKGROUND: Rahmon’s regime endured an armed insurgency, plummeting remittances and rising household poverty in 2015. The Islamic Renaissance Party (IRPT) lost its two seats in the March parliamentary elections. Over the summer, party deputies “voluntarily” resigned under pressure from the security services. In late August, the Ministry of Justice cited the closure of local offices and other legal infringements as a justification to ban the party. After the former Deputy Defense Minister Abduhalim Nazarzoda led armed attacks in Dushanbe and Vahdat on September 4, the government accused the IRPT of plotting the attacks, labelling it a “terrorist organization.” With approximately 200 party members in detention, and leader Muhiddin Kabiri exiled to Europe, Rahmon is now moving to solidify his own position.

The vaguely-worded “Law on the Originator of Peace and Leader of the Nation” codifies many of Rahmon’s current powers. Article 2 guarantees that Rahmon’s “economic and social privileges continue during and after he is president.” If he steps down, he would still oversee domestic and foreign policy according to the law. Article 5 says he is immune from arrest, seizure of property and any liability for decisions made while in office. It also states that Tajikistan will set up a museum dedicated to the life of Emomali Rahmon at the tax-payers expense.

Originally passed in 1994, the constitution has already been amended twice to extend Rahmon’s powers. As well as amendments to lower the age limit for presidential candidates and allow Rahmon to run indefinitely, proposals to ban atheist and religious parties are reportedly under discussion. With the IRPT already outlawed, the changes could target the Communist Party, which still has two seats in the Supreme Assembly.

IMPLICATIONS: With the proposed changes, Rahmon is preparing for two contingencies. In the first, his “leader of the nation” status – coupled with proposed amendments to the constitution – allow him to remain president indefinitely. At 63, and with no reported health problems, this is very possible. He is substantially younger than President Nazarbayev of Kazakshtan, 75, and President Karimov of Uzbekistan, 77. In the second scenario, Rahmon can retire as early as 2018 when his son Rustam turns 30. His new legal status would allow him to relinquish the presidency but maintain a great deal of influence.

The prospect of Rustam Emomali taking over the presidency fits the patrimonial pattern of Rahmon’s regime consolidation. He still runs the state largely as a family business. Rustam has long been groomed for power. Rahmon has given his son the opportunity to gain experience in a range of government offices. He held a number of senior government posts before being promoted to head the Customs Service in 2013. Last year, Rustam became head of the State Agency for Financial Control and Measures against Corruption. Rahmon has delegated a great deal of power to eldest daughter Ozoda. In September 2009, Ozoda became Deputy Minister of Foreign Affairs at the age of 30. On January 27, she was appointed Chief of the Presidential Staff. Those who have married into the Rahmon family have not been left out. Ozoda’s husband, Jamoliddin Nuralizoda, was appointed First Deputy Finance Minister in 2008 and is now the First Deputy Chairman of the National Bank of Tajikistan. Another son in law, Ashraf Gul, became Consul-General at Tajikistan’s embassy in Moscow in 2014. Rahmon’s brother-in-law, Hasan Asadullozoda controls Tajikistan’s largest private bank, and owns an airline company and a firm that supplies bauxite for the country’s state-owned aluminum company.

The new “leader of the nation” law and proposed changes to the constitution fit with the increasing authoritarianism that has characterized Tajik politics over the past few years. Rahmon has built a relatively cohesive regime bonded by kinship and marital ties. Having removed and killed many of the former opposition commanders left in government and neutralized the leading opposition party, Rahmon is likely to try to keep the current elite in line with a mixture of patronage and the threat of removal from office. The balance of power between elites in the government is not guaranteed. Buying off potential opponents does not always work. Recent outbreaks of violence in the Rasht valley between 2008 and 2011, in Khorog in 2012 and 2014 and Dushanbe in 2015, all involved current or former members of the government rebelling against the state. Even as Rahmon surrounds himself with family members, the potential for a member of the ruling elite to rebel against the state still exists.

While Rahmon enjoys genuine popularity as the man who lifted Tajikistan out of a bloody civil war, his son does not. Rustam has a reputation as a playboy rather than as a serious politician. His opulent wedding, at which his father took to the stage and sang, caused much amusement in social media. He founded, owned and played for football club Istiqlol FC. When the referee in a game against rivals Ravshan Kulob in 2011 allowed Rustam to score the winning goal despite being offside, a riot broke out. Such displays of popular anger are rare in Tajikistan. The violence was directed at Rustam himself and the nepotism he symbolizes. If he becomes president, Rustam will have limited legitimacy and may face popular hostility.

CONCLUSIONS: Rahmon’s regime has remained surprisingly resilient. He has suppressed an armed insurrection, outlawed the leading opposition party and continues to muddle through despite the weakened economy. Rahmon remains popular, and, with his new status as “leader of the nation,” he could continue ruling the country for many more years. But he is clearly thinking about succession. In choosing his son, he is following the path of the Aliyevs in Azerbaijan and the al-Assads in Syria. If Rahmon does have to step down, Rustam will struggle to replace him as president. He does not enjoy his father’s status and is widely unpopular. Regardless of whether he remains in power or his son takes over, one thing is clear: Rahmon is intent on keeping the presidency and the government a family business.

AUTHOR’S BIO: Edward Lemon is a doctoral candidate at the University of Exeter. In his research, he examines the relationships between security, Islam and migration in Tajikistan.

More in this category: « Russia's confrontation with Turkey and instability in the South Caucasus A breakthrough in Iran-Azerbaijan relations? »
back to top