Afghanistan Headed for a New Spiral of Violence as U.S. Cancels Talks with the Taliban

On September 7, U.S. President Donald Trump announced that he was calling off peace negotiations with the Taliban. The announcement took the world by surprise since U.S. negotiators had said that ongoing negotiations with the Taliban had produced a draft accord only a week earlier. It seemed then that the withdrawal of U.S. troops from Afghanistan was imminent, yet their exit has now been put on hold. In addition to triggering another phase of heightened violence in the war-ravaged country, Trump’s decision could pave the way for an enhanced role for Russia and China in the Afghan peace process. 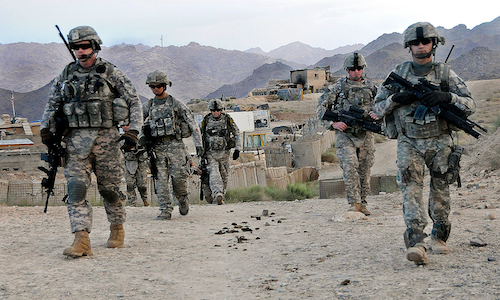 BACKGROUND: Trump cited the killing of an American soldier by the Taliban on September 5 as the reason for the decision to call off peace talks with the Taliban. Only a week earlier, the U.S. Special Representative for Afghanistan Reconciliation, Zalmay Khalilzad, announced that the two sides had reached agreement “in principle” on a draft accord. Under the draft deal, the U.S. had reportedly agreed to close five bases in Afghanistan, and to withdraw around 5,400 American troops from the country within five months. In return, the Taliban agreed to ensure that Afghanistan would not be used as a base for attacks against the U.S. and its allies.

As Khalilzad briefed Afghan President Ashraf Ghani on the draft deal, Taliban negotiators headed back to discuss the deal with the group’s leadership. The deal awaited Trump’s nod. The U.S. President was to hold a secret meeting with senior Taliban leaders and the Afghan President at the Camp David retreat on September 8. It was at this point that Trump cancelled the meeting and called off talks.

The U.S.-Taliban talks began in October last year. Nine rounds of talks ensued and throughout this period, the Taliban continued to carry out attacks on Afghan government forces and civilians, U.S. troops, as well as its main rival, the Islamic State-Khorasan (ISK), the Afghan affiliate of the terrorist group known as Islamist State of Iraq and Syria (ISIS). In fact, Taliban violence surged as the a deal increasingly seemed like a real possibility.

Indeed, July was the deadliest month for Afghan civilians in over two years. According to the United Nations Assistance Mission in Afghanistan, over 1,500 civilians were killed or injured that month, the highest monthly toll so far this year and the worst since May 2017. The Taliban claimed responsibility for the bulk of the casualties. There was no respite from the violence in August. Just days before the U.S. and the Taliban reached a draft accord, the latter launched major offensives on the strategic town of Kunduz in northern Afghanistan and Pul-i Khumri, the capital of the neighboring Baghlan province. On September 2, just hours after Khalilzad had briefed the Afghan government on the draft deal and was outlining the draft agreement to the Afghan people in an interview broadcasted on ToloNews television channel, the Taliban carried out a massive truck bomb explosion in Kabul’s Green Village compound, a residential area for foreign nationals and offices, killing 16 people and injuring 119.

IMPLICATIONS: Taliban attacks during the talks evoked much concern among Afghans. Many believed that by not pushing for a ceasefire the U.S. was appeasing the insurgents. Questions were raised over the quality of the “peace” that the talks would produce. Many both within and outside Afghanistan argued that the aim of the peace talks was not so much to bring peace but to provide the U.S. with an exit route. A swift withdrawal of U.S. troops was considered to boost Trump’s re-election prospects in 2020.

Trump’s decision to halt the talks has therefore been widely welcomed by many Afghans, who feared that the exit of U.S. troops would result in a return to civil war. However, it does seem that even with these troops staying put, Afghanistan is in for another spell of spiraling violence. Responding to Trump’s announcement, the Taliban warned of additional attacks, threatening that the decision would cost the U.S. heavily in terms of human lives.

While none of the actors in the conflict felt a need for limiting violence during the talks, the gloves are now certainly off. Not only have all sides in the conflict stepped up their combat activities; civilians are bearing the brunt. While the Taliban has carried out dozens of attacks since the talks were halted, including one on September 17 at a tightly guarded election rally where President Ashraf Ghani was present, Afghan security forces attacked a Taliban hideout, which claimed the lives of 40 civilians attending a wedding nearby. Likewise, a U.S. drone strike on an ISK hideout killed 30 farmers. Such bloodshed is likely to grow as the main actors seek to gain control over territory and leverage in any possible future talks.

The prospects for future U.S.-Taliban talks remain unclear. Trump has declared negotiations “dead,” meaning that they are permanently stopped, however, this could be a tactical move, for example aimed at pressuring the Taliban to agree to a ceasefire during the U.S. troop withdrawal.

Interestingly, the Taliban has not ruled out returning to the negotiating table, stating that its “doors are open” for future talks. It wants the U.S. to pull out at any cost and if this can be realized through negotiations, this remains a plausible option for the Taliban. Unlike Trump, who is running out of time as he will have to face U.S. voters in a year, the Taliban has the luxury of time on its side and can afford to wait for the U.S. government to return to the table on its terms.

Trump’s sudden cancellation of talks will likely result in Russia and China playing a larger role in the conflict resolution process. Within days of Trump’s announcement, Russia hosted a Taliban delegation in Moscow. A larger Russian role will not only enhance Russia’s influence in Afghanistan and leverage over the U.S., but also strengthen its ties with two other major stakeholders: Pakistan and China. A Taliban delegation has visited China as well. Beijing is concerned that Taliban and ISK violence might spill over into its restive Xinjiang province, and that it could jeopardize projects of the China-Pakistan Economic Corridor. China and Russia could utilize the framework of the Shanghai Cooperation Organization (SCO) to settle the conflict in Afghanistan, which would imply a decline of the U.S. role in resolving the Afghan conflict.

CONCLUSIONS: Trump’s decision to call off talks with the Taliban was long overdue, especially since the Taliban was carrying out violent attacks on civilians and security forces throughout the period that talks were in progress. The fate of U.S. soldiers in Afghanistan is now mired in uncertainty and Trump will need a face-saving deal to pull them out. His abrupt decision to call off the talks at a late stage in the process will likely undermine the role of the U.S. in Afghanistan, especially with Russia and China poised to enhance their own roles in the war-ravaged country through the SCO. It remains to be seen whether they will be more successful than the U.S.

More in this category: « Impact of the US-Iran Confrontation on Central Asia China-Russia Security Cooperation in Central Asia »
back to top