Impact of the US-Iran Confrontation on Central Asia

Increasing political and economic pressure on Iran, exacerbated by the renewed economic sanctions resulting from the U.S. withdrawal from the 2015 nuclear deal known as the Joint Comprehensive Plan of Action (JCPOA), has led Tehran to seek support from the two major Eurasian political and economic powers Russia and China. Iran has also increasingly turned its attention toward its neighbors in Central Asia, which remain closely integrated into the political, economic and military projects of Moscow and Beijing. Central Asian leaders are well aware that a possible armed conflict between the U.S. and Iran would adversely affect Eurasian security. 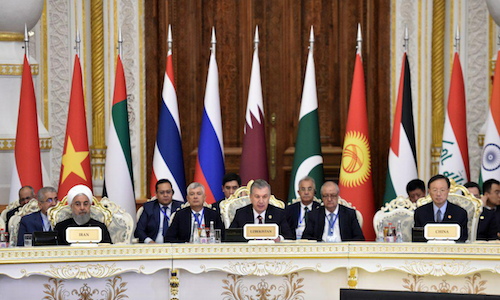 BACKGROUND: During the international crisis in the Persian Gulf in June 2019, which included a series of attacks on oil tankers and the downing of a U.S. Global Hawk surveillance drone, Iranian President Hassan Rouhani visited Central Asia. On June 13-14, he attended the summit of the Shanghai Cooperation Organization (SCO) in Bishkek, where he met with Russian leader Vladimir Putin and China's Xi Jinping. Rouhani stressed “the unity of the Iranian nation in the face of unilateral U.S. economic terrorism” and termed ties with China and Russia “as always strategic.” He used the SCO platform to accuse the U.S. of undermining regional and global stability and urged all members of the summit to unite against unilateralism.  During the summit discussions, it became clear that Iran continues to seek to expand its “resistance” policy through the Central Asian and SCO member states.

Iran first applied for SCO membership in March 2008, yet the process was frozen until 2015 due to UN sanctions against Iran. While these sanctions were lifted with the implementation of the JCPOA, other issues continued to hinder Iran’s SCO bid for full membership, rather than observer status. Among these are Iran’s difficult relationships with Tajikistan and Pakistan, which are full SCO members, whereas the admission of new members to the SCO requires unanimous assent.

After Kyrgyzstan, Rouhani visited Tajikistan’s capital Dushanbe on June 15-16, where he attended the summit of the Conference on Interaction and Confidence Building Measures in Asia (CICA). Created in 2002 at the initiative of Kazakhstan, CICA includes 27 states, including Russia, China, the Republic of Korea, India, Turkey, Azerbaijan and the countries of Central Asia, with the exception of Turkmenistan. In his speech at the CICA summit, Rouhani once again threatened the European signatories of JCPOA “to terminate the implementation of some of its obligations” on the nuclear deal.

Immediately after the conclusion of the CICA summit, the Fars News Agency reported that Iran had exceeded the 300 kilograms of 3.67 percent enriched uranium it is allowed to stockpile under the deal. As required by the 2015 JCPOA agreement, Iran has abandoned the pre-deal 20 percent enrichment level, capping it at 3.67 percent. At the initiative of Russia and China, the CICA summit in Dushanbe adopted a declaration calling for “all other parties to fully fulfill their commitments on Iran’s nuclear program” after the U.S. withdrew from it.

President Rouhani’s primary focus in attending the SCO and CICA summits in Bishkek and Dushanbe was to alleviate Iran’s isolation. As the final documents of these summits showed, Iran managed to achieve certain successes with the support of China, Russia and the Central Asian states.

IMPLICATIONS: During his tour of Central Asia, Rouhani made diplomatic efforts to enlist the support of Russia’s Putin and China's Xi to reduce the consequences of the severe U.S. economic sanctions crippling the Iranian economy. The value of Iran’s currency, the Rial, plummeted by about 60 percent over the past year. Inflation is up 37 percent and the cost of food and medicine has increased between 40 and 60 percent. The youth unemployment rate is close to 30 percent in a country where almost 40 percent of the population of 80 million is under 25 years of age. Russia does not hide its pleasure that the Trump Administration’s “maximum pressure” campaign has forced Iran to seek integration with the Kremlin’s economic projects in Eurasia. In June 2019, Iran’s parliament, the Majlis, ratified the free trade zone agreement with the Eurasian Economic Union (EEU), which includes Russia, Belarus, Armenia, Kazakhstan and Kyrgyzstan as members. Russia represents 84 percent of the EEU’s gross domestic production and the organization is for all practical purposes an instrument of Russian economic influence in the post-Soviet space.

Iran’s full membership in the SCO remains uncertain. When Iran gained SCO observer status in 2005, it hoped to leverage the SCO’s anti-NATO sentiment and to capitalize on the political value of the growing tensions with the U.S. Iran expected that these sentiments would facilitate full membership in the organization but no tangible dividends materialized.

Even after the conclusion the 2015 JCPOA deal and international sanctions were lifted, Iran’s full membership was denied twice, in 2016 and 2017. In comparison, India and Pakistan both applied for SCO membership in 2015 and were officially recognized as members in 2017. Tajikistan has been a major barrier in this regard; relations between Tajikistan and Iran deteriorated seriously in 2015 when Tajik authorities accused Iran of supporting the opposition Islamic Renaissance Party of Tajikistan (IRPT). Former IRPT member, deputy defense minister and rebel general Abdukhalim Nazarzoda attempted a coup d'état in the country in September 2015. Tajikistan has further accused Iran of training Tajik Islamic militants and protested loudly against Iran’s Supreme Leader Ali Khamenei’s reception of IRPT leader Muhiddin Kabiri, who left Tajikistan due to political persecution, in December 2015. Moreover, Dushanbe suspected Iran’s hand in a terror attack in July 2018, when four foreign tourists were killed in Danghara. Iran has diplomatically denied all accusations of involvement in Tajikistan’s civil war in the 1990s, which further deteriorated the relationship between the two Persian-speaking states.

Today, when the confrontation with the U.S. has reached its peak, full membership in the SCO remains a strategic goal for Iran. Tehran expects that its SCO accession will make this organization an anti-American outpost in Central Asia and hopes to use the SCO platform to criticize the U.S. in a global context. According to Iran’s leaders, a regional security system in Central Asia should be formed without a U.S. presence, on the basis of a balance between Russian and Chinese interests, which Tehran expects to leverage in pursuit of its goals. Second, Tehran’s full membership in the SCO can help reduce the negative impact of U.S. sanctions that limit the inflow of foreign investment in its energy sector, by increasing oil trade with other SCO members, primarily with China and India. Third, SCO membership would undoubtedly raise Tehran’s regional status. Also, Iran’s leaders do not hide their hopes that SCO membership will counteract U.S. and Israeli influence in Central Asia.

However, despite their support for Iran’s position on the nuclear deal during the SCO and CICA summits, Moscow and Beijing are not inclined to fully open the doors of the SCO for Iran, fearing that Iran’s full membership would reinforce the geostrategic confrontation between the SCO’s members.

As demonstrated by the output of the SCO and CICA summits, the U.S.-Iran confrontation has begun to reverberate in Central Asia. With the support of Russia and China, which have strong positions in Central Asia, Iran is seeking to expand its strategic influence among the five former Soviet Muslim republics. Tehran has always opposed the deployment of U.S. military bases in Central Asia, considering them a threat to Iran’s national interests. In fact, Iran threatened to attack the U.S. airbase in Kyrgyzstan in 2012. Experts note that in recent years, Iran’s intelligence agencies have intensified their activities in the region, with highest priority given to countering U.S. interests.

CONCLUSIONS: Central Asian governments are well aware that the situation around Iran is pivotal to security and stability in their region. A destabilization of the Islamic Republic and its involvement in a large-scale military conflict in the Persian Gulf would seriously affect the security of the Central Asian region. Therefore, the Central Asian states will carefully calibrate their economic and military cooperation with Iran in order not to violate U.S. sanctions and the norms of international diplomacy. Despite the pro-Iranian final communiqués resulting from the SCO and CICA summits, the Central Asian states, taking into account the realities of international politics and the anti-Iranian strategy of the U.S., have opted for a pragmatic approach towards Iran. The five Central Asian nations prefer to retain a balanced position on the Iranian nuclear issue by affirming Iran’s the right of to use nuclear technology but only for peaceful purposes.

Uran Botobekov, PhD, is an expert on Political Islam and author of “Think like a Jihadist: Anatomy of Central Asian Salafi groups,” (Modern Diplomacy, 2019).

More in this category: « Armenia and the U.S.: Time for New Thinking Afghanistan Headed for a New Spiral of Violence as U.S. Cancels Talks with the Taliban »
back to top