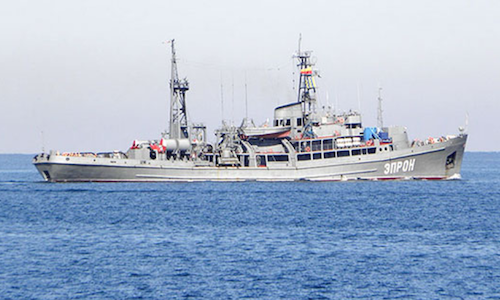 BACKGROUND: According to Russian officials, the Russian Federation is not fully utilizing the economic potential of its Caspian regions, given the importance of the Caspian Sea in Eurasian trade flows. Russian experts emphasize that the development of Caspian transport infrastructure remains insufficient for satisfying domestic and international transportation needs, which effectively increases Eurasian transit bypassing Russia (through Azerbaijan-Georgia-Turkey). In 2015-2017, the volume of such cargo transit increased by over 15 percent, compared to an increase of only 10 percent through Russia’s Caspian region. Russia’s actual transit revenues in this sector barely reaches a third of the existing potential.

The freight turnover of Russia’s seaports for January-April 2018 was 260.8 million tons, an increase of 3.7 percent from the same period in 2017. Yet the same indicator for the Caspian basin reached only 1.72 million tons – almost half of the previous year. Whereas transshipment of dry cargo increased by 16 percent to almost one million tons, and bulk cargoes increased 2.3 times to 721,000 tons, these figures are projected to decrease in coming years. Moscow thus needs to strengthen the economic potential of its ports in the basin.

On November 8, 2017, the Russian government approved a Strategy for the Development of Seaports in the Caspian Sea, with connected rail and road transport, until 2030. The strategy aims to create a sustainable transport and logistics corridor, and to develop trade and tourism primarily with Iran, India and the Persian Gulf countries. It envisions development of the Caspian ports Astrakhan, Olya and Mahachkala and the construction of a deep-sea port in Kaspiysk until 2025.

Moreover, Russia’s 2015 Marine Doctrine lists key economic projects to be realized in the Caspian basin in coming years. Among other things, the doctrine emphasizes the necessity of establishing a modern oil and gas exploration and production industry in Russia’s zone of the Caspian Sea, including coastal transport infrastructure in compliance with environmental safety regulations. Moreover, the doctrine underlines the need to involve Russian companies in geological exploration and prospecting, and to include Russia’s section of the Caspian Sea floor in the system of export undersea pipelines. Other objectives include the modernization of seaports to attract foreign economic activity and to diversify routes for the supply of goods and services to the internal and external markets by maritime transport. The doctrine also envisions modernization of the trade fleet, primarily ships of the “river-sea” type and ferries, along with the development of Caspian cruise lines and tourism clusters in beach and ecological zones.

IMPLICATIONS: The successful implementation of the envisioned plans requires enormous investments. Given the current state of Russia’s relations with the West and the shortcomings of its economy, Moscow will be hard pressed to devote substantial state funds to projects in the Caspian. Russia therefore seeks to engage littoral states in joint economic projects and to secure investments from the Gulf countries in Russia’s Caspian region. In 2017, Dagestan’s former head Ramzan Abdulatipov was appointed special representative of the Russian president for humanitarian and economic cooperation with the states of the Caspian region, tasked to promote economic cooperation between Russia and other littoral states. Moreover, the owners of large Russian companies are encouraged to take part in the region’s economic activities. For instance, Dagestan’s current head Vladimir Vasilyev stated that the business of Senator Suleiman Kerimov will be registered in Dagestan, which will benefit the republic’s economy.

The Russian government also promotes a new project, the Eurasia Canal, to expand the internal transit links between the Caspian and Black Seas. Driven by both security-related and economic motives, the project is designed to compete with other East-West links, to facilitate the development of Russia’s economic relations with countries such as Kazakhstan, India, Iran, Pakistan, China, and Vietnam, and to reinforce Russia’s position in trade between China and the West.

Additional projects, which will also be connected with the canal, have been mentioned as future main Russian transportation ports in the Caspian. These are Makhachkala, the planned new port in Kaspiysk in Dagestan, and Lagan in Kalmykia. Chebotarev noted that Dagestan needs an additional port to provide for the transportation of goods delivered, including by rail. This will allow for connecting the Caspian to the Black Sea through railway and motorways, which is of great political and geopolitical importance.

According to Russian officials, China has already expressed interest in investing in these projects. Officials in Kalmykia stated that Port Lagan JSC (the initiator of the project) has already reached agreements with China’s two largest construction companies. According to the CEO of Port Lagan JSC, POLY Group and China Energy Engineering Group International are ready to prepare the design and documentation for the port and start construction this year.

Officially securing its military dominance in the Caspian through the Convention on the Legal Status of the Caspian Sea in 2018, Russia also gained legal leverage to influence the development of energy projects in the basin. Although Article 14 of the convention recognizes the parties’ right to construct underwater pipelines or cables in the sea, it mandates that littoral states coordinate their projects regarding their compatibility with environmental standards. Thus, each of the five Caspian states, including Russia, will be able to raise questions regarding the environmental impact of trans-Caspian pipelines or cable projects. This condition encourages Russia not only militarily, but also economically, to reinforce its power projection in the Caspian basin.

Yet despite Russia’s strategies and announcements of new economic projects, several challenges remain to their realization. In particular, outside investors remain reluctant due to Western sanctions and competing transportation projects through Azerbaijan and Georgia. According to Abdulatipov, despite several convincing energy, transport and logistics projects, there are so far no tangible results.

CONCLUSIONS: Russia’s ambitious economic projects in the Caspian region are driven by internal and external needs. On the one hand, Moscow seeks to mitigate the difficult economic situation in Russia’s Caspian regions. After the drop in oil prices, Russia’s economic ability to support social projects in the region is limited. Social and financial support are key elements in buying legitimacy in the turbulent region, especially in Dagestan and adjacent republics. On the other hand, through regional economic cooperation, Moscow aims to strengthen the economic links between littoral countries and Russia and cement its position in the Basin. However, suspicions and diverging interests of the littoral countries, along with Russia’s economic limitations, make the perspectives of Russia’s economic projects in the Caspian problematic.

Nurlan Aliyev is a PhD Candidate and Researcher at the Institute of International Relations of the University of Warsaw. He received the Visegrad Found Scholarship for 2018-2019. From 2000 to 2017, he worked as an expert at various government, non-government and international institutions. His research focuses on political and security processes in Russia, post-soviet countries and asymmetric warfare threats.

More in this category: « The Capture of Atambayev And What It Means For Kyrgyz Politics Will Kadyrov be Dismissed? Assessing the Truth Behind the Rumors »
back to top