The regime change in Armenia revived hopes in Azerbaijan that the new Armenian government would take a more proactive approach to the frozen settlement process of the Nagorno-Karabakh conflict. The latest meeting of Azerbaijan’s and Armenia’s leaders in Vienna promised humanitarian cooperation, yet the short-term silence on the frontline was soon broken by new ceasefire violations and counter-productive statements from the Armenian government. From Azerbaijan’s perspective, the building of trust required for a reinvigoration of the peace process requires steps such as the withdrawal of Armenian occupying forces from Azerbaijan’s territories, with a subsequent return of IDPs. Armenia’s overreliance on the status-quo creates systemic problems for the negotiations. 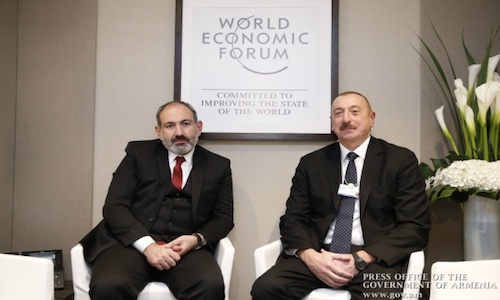 BACKGROUND: In recent months, Azerbaijan’s and Armenia’s foreign ministers met several times and pledged to prepare their populations for peace. Meanwhile, the Azerbaijani community of Nagorno-Karabakh has repeatedly reached out to the region’s Armenian community for peaceful reconciliation, while Azerbaijan’s government pledged to ensure the security of Nagorno-Karabakh Armenians and recognize their right to the highest level of self-determination within Azerbaijan’s international borders. The Armenian government, however, disregards very idea of negotiations on the de-occupation of Azerbaijan’s occupied territories, which constitutes the cornerstone of the entire process. The process was aggravated by a controversial statement from Armenia’s National Security Director Arthur Vanetsian that “none [in Armenia] will surrender even an inch of land.” In Azerbaijan, this was received as clear evidence of Armenia’s direct participation in the annexation of Azerbaijani territories.

Although no serious breakthrough was registered during the latest meeting of Azerbaijan’s President Ilham Aliyev and Armenia’s Prime Minister Nikol Pashinyan in Vienna on March 29, both sides described the meeting as constructive, mainly in terms of confidence-building measures. The subsequent meeting of Azerbaijan’s and Armenia’s foreign ministers in Moscow on April 15 endorsed the establishment of bilateral humanitarian interactions. Yet after the Vienna meeting, Armenia’s Defence Minister David Tonoyan declared that he will rephrase the “territories for peace” formula (transferring occupied districts around Nagorno-Karabakh to Azerbaijan in exchange for a peace treaty) to “new war - new territories,” implying that the Armenian army will shift its “defensive strategy” to “active deterrence” by conducting special reconnaissance operations in Azerbaijan’s territories. Azerbaijan, in response, did not exclude the liberation of occupied territories through military means under the UN Charter’s self-defense provision. President Aliyev later declared that “the war is not over yet – only the first stage of it is.” Azerbaijan’s Defence Minister Zakir Hasanov urged that “now it is not the 1990s” (the early years of war with Armenia when Azerbaijan’s army was poorly equipped and trained). On the third anniversary of the 2016 April fighting, Armenian armed forces held joint exercises with Russia’s 102nd Military Base under the Armenia-Russia Joint Command in Armenia. In May, Azerbaijan conducted large-scale drills, followed by joint tactical exercises with Turkey in June.

IMPLICATIONS: The most significant outcome of the Vienna meeting was that the negotiation format remained unchanged, i.e. that negotiations will be conducted between Armenia and Azerbaijan only. The Armenian side wanted to change the format and the content of the Madrid Principles by involving the separatist regime established in Azerbaijan’s occupied territories in the negotiations. Azerbaijan regards Armenia’s attempts to change the format as illegitimate and impermissible without a consensus, according to the OSCE’s Helsinki Ministerial Council resolution of March 24, 1992. This resolution authorized the Armenian and Azerbaijani communities of Nagorno-Karabakh as interested parties, while Armenia and Azerbaijan remain principal stakeholders to the conflict. The unilateral attempt to change the format was denounced also by the OSCE Minsk Group Co-chairs, since they believe that a lasting settlement is possible only on the basis of the core principles of the Helsinki Final Act (HFA) and the additional elements, the Madrid Principles, stressing the de-occupation of Azerbaijan’s territories, repatriation of IDPs, and defining the future status of Nagorno-Karabakh. The “right to self-determination,” according to the HFA, should be “at all times in conformity with [...] the territorial integrity of states.” Thus, the self-determination principle for Nagorno-Karabakh, which is Armenia’s main focus, must not undermine Azerbaijan’s territorial integrity. Armenia constantly blames Azerbaijan for “threatening to use force,” however, Armenia is itself violating a key clause of the HFA urging to refrain from “the use of force against territorial integrity,” by occupying Azerbaijani territory. Until present, Yerevan has not even fulfilled the demands of the UN Security Council’s resolutions in this regard.

This year, both countries marked the 25th year of the ceasefire agreement signed between Armenia and Azerbaijan, as well as the Armenian and Azerbaijani communities of Nagorno-Karabakh. The ceasefire agreement failed to produce a sustainable peace – its key aim was not a long-term consolidation of the status-quo by building military trenches or refusing constructive engagement, but to create preconditions for the complete withdrawal of occupying forces, deployment of international observers, restoration of communications, and a return of displaced populations. Baku, therefore, insists that the ceasefire investigation mechanism should be implemented in parallel with substantial negotiations envisaging the restoration of Azerbaijan’s territorial integrity. During the past 25 years, contrary to the Geneva Convention, Armenia has actively resettled the occupied territories in order to change the demographic composition of Nagorno-Karabakh ahead of a future referendum to define its status.

Furthermore, without confidence-building supported by constructive steps, the process is doomed to failure. As one humanitarian measure, Azerbaijan has repeatedly offered to bilaterally exchange prisoners of war on the “all for all” principle, which could contribute to the psychological preparation for peace in both societies. Yet the fragile trust was damaged by the recent killing of an Azerbaijani battalion commander (and later a soldier) by an Armenian sniper on the frontline, during a visit of the OSCE Minsk Group Co-chairs to Baku. In Azerbaijan, this and other provocations cast doubt on the genuine intentions of Armenia’s political elite. In addition, Tonoyan’s hawkish statement on the use of force against Azerbaijan suggests an incoherence between Armenia’s domestic establishment and foreign policy discourse that also spoils the climate of trust. Simultaneously, there is a risk that Baku is provoked into negative reactions, possibly deliberately with the purpose of making Azerbaijan disrupt the negotiations first.

The prevailing status quo has also prompted the conflicting parties to invest in a heavy military build-up. Skeptical towards the prospect of a voluntary de-occupation under diplomatic negotiations and in response to Armenia’s military provocations, Azerbaijan reciprocates with a constant military readiness. Anticipating a possible Armenian frontline offensive in order distract the public from intra-government political confrontations, Azerbaijan’s armed forces have been instructed to strengthen engineering-defensive works on the frontline, preparing to suppress enemy incursions and to conduct possible large-scale counter-offensive operations. Azerbaijan’s armed forces are now sufficiently mobile, flexible and autonomous for a rapid reaction to an armed attack from the Armenian side. Given the growing militarization of both countries, there is a clear risk that future military confrontations will not be locally contained.

CONCLUSIONS: The approach of Armenia’s new government to the negotiations leads the process to a deadlock. Interactions around the recent meetings raise the question of whether Yerevan is capable of engaging in the full range of issues required for a peace settlement or will limit its participation in the negotiations to a discussion on humanitarian cooperation. If so, this will be viewed in Azerbaijan as an attempt to buy extra time to continue illegal economic and military fortification activities in the occupied territories and to receive more military aid and weaponry from Russia.

However, Pashinyan’s “economic revolution” cannot be accomplished if two of Armenia’s four international borders, with Azerbaijan and Turkey, remain closed, leading to a stagnant economy, attrition of human and financial resources and high levels of emigration. Without settling relations with Azerbaijan, Armenia will not be able to address the current impasse conditioned by the country’s isolation from regional energy and transportation projects and overdependence on Russia.

The incoherent actions of Armenia’s political elite have dashed the hopes in Azerbaijan for more constructive negotiations following Armenia’s Velvet Revolution. Azerbaijan’s perception is that official Yerevan, by highlighting the country’s domestic democratization process, has sought to distract international criticism for the occupation. The new Armenian government, with support from a majority of Armenians, apparently prefers to retain the previous government’s Karabakh policy, disregarding the conflict’s severe consequences for the country.

Image Source: Press Office of the Armenian Government accessed on 6.27.2019