Armenia's Revolution and its Lessons

On April 23, after almost ten days of mounting popular demonstrations, Serzh Sargsyan resigned as Armenia’s Prime Minister. While public antipathy to him mounted throughout this interval, it appears that the army’s impending disintegration into pro and anti-Sargsyan groups was a decisive factor. Yet sadly but typically the Western media ignored one of this year’s major geopolitical stories – namely Armenia’s developing revolution – until Sargsyan resigned and even then covered it sporadically. Since Armenia and its capital Yerevan are off the beaten track, apparently they do not merit major news coverage. We should not emulate this mistake. 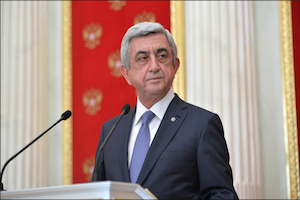 BACKGROUND: From April 15, massive demonstrations occurred in Yerevan protesting an attempt by the ruling Republican party to ensure its possession of political power. As President, Sargsyan rewrote the constitution and pretended to establish a more Parliamentary system, handpicked his successor, resigned, then engineered his nomination and installation as the all-powerful Prime Minister. He subsequently reappointed many members of his former cabinet. By such means, Sargsyan and the elite around him sought to ensure that they could keep their power and assets while openly drawing closer to Russia.

Sargsyan’s actions evoke memories of the infamous “castling move” between Vladimir Putin and Dmitry Medvedev in 2011 that restored Putin as President of Russia, triggered large demonstrations in Moscow, and launched him on the aggressive course of domestic and foreign policies he now pursues. As in 2011, Sargsyan’s machinations generated huge demonstrations that unlike those in Russia have now accomplished a revolution. Moreover, in Russia the police and the army did not break ranks, unlike in Armenia. These demonstrations display profound lessons and repercussions for Armenia, the post-Soviet sphere, and international affairs in general.

IMPLICATIONS: First, in Armenia, Sargsyan’s maneuvers and the reaction underscored the corruption and desperation of Armenia’s ruling elite. Although the West more often censures Azerbaijan for human rights violations and corruption, Sargsyan’s regime jailed political opponents and clearly was equally corrupt. Moreover, it has clearly mortgaged Armenia’s political and economic sovereignty to Moscow, unlike Azerbaijan. The transparent similarity of Sargsyan’s games to those of Putin seven years ago and Moscow’s rush to congratulate the new government highlight this dependence on Russia. These facts also show that Russian policy aims to replicate Putin-like regimes wherever Russian influence holds sway and to support such elites, like Sargsyan, who wish to emulate Putinism.

Second, Armenia’s developments also show the continuing harmful influence of the unresolved war in Nagorno-Karabakh. The war and the effort to hold on to lands captured from Azerbaijan have hijacked Armenian politics at the expense of its actual sovereignty and economic progress. Armenia’s population is declining; its economy is stagnant and thanks to its dependence on Russia, the country is oriented towards the Eurasian Economic Union rather than the EU. It is therefore no surprise that the revolutionaries are primarily young people with nothing to lose.

Third, the role of the armed forces shows that once again in these revolutions, whether in Eastern Europe in 1989, the USSR in 1991, and more recently the Arab Spring, the role of the armed forces is a vital factor in determining the outcome. If the army stays united behind the regime, it survives. If the army splits or unites against the regime, the game is over. This may also explain why one of Putin’s first moves was to restore intelligence penetration of the Russian army in 2000 and why his tenure has been marked by the incessant creation of private and paramilitary organizations, like the National Guard, whose mission is loyalty first to him and then the state.

Fourth, beyond Armenia’s individual pathologies, the revolution was the fourth upheaval since 2011, indicating the inherent instability of Putin-type, post-Soviet regimes even if they maintain an imposing façade for a long time. Georgia, Ukraine, Armenia and Kyrgyzstan have all revealed how these corrupted and authoritarian regimes become subjected to repeated and unending cycles of political strife that underscore their dysfunctionality. In this context, one explanation for Uzbekistan’s reforms is probably President Mirziyoyev’s’ awareness that, to paraphrase Tsar Alexander II, it is better to reform serfdom or despotism from above than to have it reformed from below.

Fifth, this inherent instability of Putinist regimes has a significant impact on regional security issues. In Armenia, it meant that Sargsyan could not be an effective partner for peace with Azerbaijan. The earlier demonstrations in 2016 stemmed from the belief that Russia was selling weapons to Azerbaijan and ignoring Armenia, and that the latter had in effect sold out its sovereignty to Russia for nothing. Nationalist sentiment may well become a major element of the current revolutionary upsurge if it continues. Yet Sargsyan’s government would not have been able to negotiate seriously with Baku or credibly enforce a peace settlement in Nagorno-Karabakh. Since Moscow is not interested in bringing the parties to peace but in exploiting this war, Sargsyan’s continuation in office would have done nothing to arrest the drift to potentially larger and more lethal violence. In effect, Armenia had surrendered its leverage over the war to Moscow.

Since renewed fighting in Nagorno-Karabakh could drag Turkey as well as Russia into war, it becomes clear that the West, led by the U.S., should not only bring the parties to negotiation but in general take the Caucasus a lot more seriously than has hitherto been the case. Given the geographic proximity of the Caucasus to the Middle East, Europe, and major energy flows, heightened Western involvement is urgently needed.

This leads to a sixth lesson. The Armenian revolution offers the West and the U.S. another chance to make their influence felt by supporting improved governance and making a more vigorous effort to bring about a peace that benefits both sides.  Public opinion in Armenia might now be ready for this especially if Western guarantees are both credible and materially tangible. Moreover, intelligently offered Western support is probably crucial to prevent the current revolution from ending in what political scientists call a partial equilibrium that preserves too much of the old order, albeit under different people at the top. Good governance, peace and both economic and political reform are a virtuous circle here. The brave demonstrators in Yerevan have handed the opportunity for acting to Western capitals.

CONCLUSIONS: The repeated instability of Armenia and the entire post-Soviet area not only obliges Russia to subsidize these dysfunctional regimes at the cost of its own national development, so that it can retain the pleasant illusion of empire and great power status. It also means that Russia ultimately cannot obtain security on its frontiers except by war or the threat thereof – it has no means to induce authority and/or legitimacy other than naked displays of power. In the CIS, coercion and corruption have replaced legitimate authority as the political coin of the realm. In effect, Moscow’s drive for empire presupposes constant war in Eurasia. This is precisely the reason why that imperial drive must be resisted; it can only breed repeated revolutions and wars as has happened in Ukraine. It could occur in Armenia as well if the Russian government considers its position in the Caucasus as threatened. Since Moscow has a major base and large investments in Armenia, this outcome is quite possible in the near future – especially if the revolution in Armenia turns anti-Russian, which remains a distinct possibility.

Moscow could not act to save Sargsyan and may have advised him that his time was up. Yet Russia will certainly not accept that its time is up so easily. Indeed, more than a decade ago, high-ranking Russian officials publicly warned of “constitutional upheaval,” which they believe is engineered from outside in accordance with their own rules of conduct, reinforcing the inherent paranoia of Russian autocracy.

Yet many Armenians still view Russia as Armenia’s savior from Azerbaijan or Turkey rather than as its corrupter. This is another reason why any Western support must be intelligent and resolute, not timorous as has been the case in the past. One U.S. news outlet remarked that Armenia has no strategic importance. As we have shown, nothing could be farther from the truth. If we fall into the trap of thinking Armenia of no importance, then it will fail to make the most of its opportunity and so will we. We will then have missed another chance and there will be more civil strife if not war until we get it right.

Armenia’s lessons therefore represent a warning to all of us. If we continue to ignore the handwriting on the wall in Yerevan not only Armenia will pay the price of that ignorance.

AUTHOR’S BIO: Dr. Stephen Blank is a Senior Fellow at the American Foreign Policy Council. He is the author of numerous foreign policy-related articles, white papers and monographs, specifically focused on the geopolitics and geostrategy of the former Soviet Union, Russia and Eurasia.

More in this category: « Taking the U.S.-Uzbekistan Relationship to the Next Level: Mirziyoyev's Historic Visit Families of ISIS Fighters Return to North Caucasus »
back to top