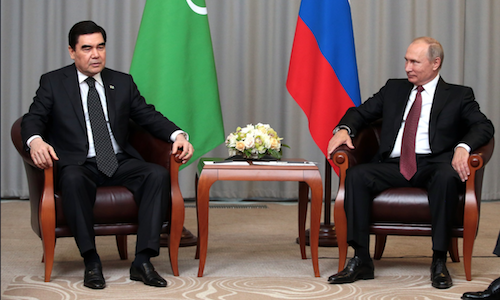 BACKGROUND: Turkmenistan’s gas reserves are among the largest in the world and the country has been anxious to send them to foreign markets. In the beginning of the post-Soviet era, Turkmenistan used the old Soviet gas pipelines to export its gas, mostly to Ukraine, hoping to access the European market. Russia also bought considerable amounts of Turkmenistan’s gas. By allowing Turkmenistan to use its transportation infrastructure, Moscow hoped to maintain control over Ashgabat while anticipating that constantly rising gas prices would make the resale of Turkmen gas highly profitable. Yet, neither of these expectations materialized. Russia consequently scaled down its purchases of Turkmen gas and these ceased altogether in 2016.

Having sensed the precarious nature of the Russian route even before the final break with Gazprom, Russia’s major gas company, Turkmenistan entertained alternative routes: Iran and China. The Iranian direction emerged early on as an alternative to Russia’s pipeline network and indeed, Turkmenistan’s gas-related business with Iran has a long history. On the surface, Iran’s interest in Turkmenistan’s gas has a limited and clearly defined reason; although Iran has large oil and natural gas reserves of its own, they are not located in the densely populated northeast of the country. This problem could be resolved by engaging Turkmenistan, which is located north of Iran and could easily send gas to its southern neighbor. The two countries agreed on a pipeline project for this purpose soon after Turkmenistan’s independence and completed it in 1997. As time progressed, the Iran-Turkmenistan gas deal continued to be an important undertaking, with the launch of a second pipeline to Iran in early 2010.

Meanwhile, Turkmenistan built a relationship with China, resulting in the June 2007 agreement to build a pipeline linking Turkmenistan’s gas fields to the Chinese market. This enabled President Berdimuhammedov, in April 2009, to refuse to sign documents that would lead to the expansion of the Soviet-era “Central Asia-Center” pipeline running through Kazakhstan to Russia (see September 1, 2010 Central Asia-Caucasus Analyst).

In December 2009, the pipeline was formally inaugurated at a ceremony involving the Presidents of China, Kazakhstan, Turkmenistan and Uzbekistan (see January 20, 2010 Central Asia-Caucasus Analyst). China soon became Turkmenistan’s main gas export destination; in 2016, Turkmenistan was the largest foreign supplier of gas to China.

For Iran, the gas cooperation with Turkmenistan had additional geopolitical benefits beyond sustaining domestic energy needs. Allowing Turkmenistan to send gas westward would have created a positive image of Iran as a reliable supplier who understood European concerns and enabled Europe to diversify its oil supply. Iran still regards becoming a transit state for gas as an important prospect, which seemingly became increasingly realistic after the end of the Iran sanctions. Yet it is unlikely that Iran will be able to take advantage of this opportunity. Iran’s relationship with the West and especially the U.S. has remained tense and the Trump administration has threatened to scrap the nuclear agreement and reintroduce the sanctions regime, making long-term gas transit agreements with Iran risky.

Another major obstacle to Iran’s role as a transit country is that is that the gas lines would have to pass through Turkey, whose relationship with Iran is far from harmonious. Turkmenistan has also eyed the possibility of sending gas to Europe through a Trans-Caspian pipeline to Azerbaijan. However, both Turkmenistan and the EU fear that the construction of such a pipeline would risk leading to direct confrontation with Russia, which continues to demonstrate its role as the major military power in the Caspian Sea.

Other options for exporting gas to Asia include the emerging TAPI, a projected pipeline that would send Turkmenistan’s gas to India and Pakistan. Continuing volatility in Afghanistan and tensions between India and Pakistan have nevertheless delayed TAPI for the foreseeable future.

IMPLICATIONS: China has been Turkmenistan’s last hope, although China’s economy has slowed down and routes have opened for Chinese imports from alternative sources, particularly Russia’s Power of Siberia pipeline. Yet China may well be the only country willing and able to provide Turkmenistan with cash and the reason for this is not primarily the need to ensure access to Turkmen gas or other natural resources. Indeed, Beijing is in the process of implementing a generations-long strategy, aiming to ascertain its influence in Central Asia. Beijing pursues this interest by providing the regimes in the region with funds in order to increase their dependence on China.

Turkmenistan has a limited choice of markets on which to offer its main commodity – gas. Given the lack of interest in Europe and the U.S., China is the only global power that can provide Turkmenistan with substantial financial backing, as seen during the financial crisis when China extended billions of dollars in loans to Turkmenistan as well as Kazakhstan.

Much of China’s investment in Central Asia and elsewhere has a meaning different from the common understanding of financial transactions in the context of Western capitalist culture. In the West, the purpose of investments is to obtain substantial and quick profits. Yet for China, investments are often a form of “gift,” which in the context of non-capitalist, pre-modern or postmodern societies implies a non-specific reciprocity from those who receive a gift labeled an investment. China clearly regards its foreign expenditure mostly as gifts in these terms rather than as regular investments. When providing loans to many non-Western countries, China fully expects that a substantial part of these loans may be misappropriated by local elites, which functions as a way of incentive.

In the context of this approach, Turkmenistan will likely continue to benefit from China’s largesse in the future on the condition of a non-specific geopolitical loyalty. Turkmenistan, of course, seeks to avoid becoming exclusively dependent on China. However, Central Asia will most likely continue to gravitate towards China, whose geopolitical influence in the region may nevertheless come under challenge if TAPI is finally completed or a Trans-Caspian pipeline is built.

CONCLUSIONS: Turkmenistan’s landlocked Central Asian territory remains heavily dependent on gas exports and China is the only country that buys Turkmenistan’s gas in substantial quantities. In the last few years, Turkmenistan has sought alternatives to the Chinese market; viewing routes through Iran and TAPI as the most promising options (see March 18, 2015 Central Asia-Caucasus Analyst). Yet neither of these options have so far materialized. It is also unlikely that Turkmenistan will be able to sustain much support from other great powers or Central Asian states. China is seemingly Turkmenistan’s only option. At the same time, Turkmenistan’s role as China’s major gas supplier is declining, especially since China has increasingly secured alternative and geopolitically safe sources to satisfy its gas needs, primarily Russia’s Power of Siberia pipeline. Along with China’s decreasing dependence on Turkmenistan, Turkmenistan increasingly depends on China as a lender and source of investment. China’s influence will most likely increase as the prospect of constructing a trans-Caspian pipeline is becoming increasingly unrealistic, despite the EU’s prodding and Turkmenistan’s desire, primarily due to strong Russian opposition. Turkmenistan’s story is not unique. It is an indication of China’s increasing hold over Central Asia and the implementation of China’s plan to rebuild the Silk Road, which will connect China with Eurasia and ensure its domination over Eurasia in the long term.

More in this category: « Are We Seeing the Beginning of ISIS-Taliban Collaboration in Afghanistan? Russia Rehearses Military Intervention in Central Asia and the Caucasus »
back to top