In late May, the member states of the Organization of the Petroleum Exporting Countries (OPEC) and several crude producers outside the cartel decided to extend the cuts in oil production by another nine months. This is a follow-up of agreement on the oil production freeze, introduced in November last year by major OPEC crude producers and several countries outside the organization to stabilize the plummeting oil prices and rebalance supply and demand in the crude market. Azerbaijan, which is not an OPEC member, decided to join the freeze deal and its May extension to break this downward spiral and mitigate the negative effects of the oil price on its budget revenues. 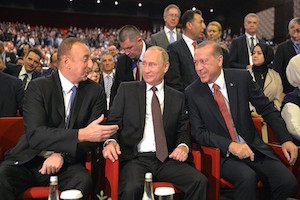 BACKGROUND: The oil production freeze is the first coordinated effort by the oil producing states since 2008 to balance global oil supply and demand in a bid to stabilize crude prices. At the outset of 2016, the Brent oil price was hovering around US$ 30 per barrel, which was the lowest in 12 years. The prolonged fall in oil prices since 2014 has caused an oversupply in the market, since hydrocarbon producers started to extract more oil to maintain their revenue and compensate for the slipping oil prices. As a result, oil production has decidedly outpaced consumption and the resulting excess in oil supply has pressured crude prices further downward.

In a bid to stabilize the market, in November 2016 OPEC members and producers outside the cartel, including Russia, agreed to curb oil production by 1.8 million barrels per day (bpd) after two years of arduous negotiations. The impact of the agreement on crude prices was initially beneficial but might be limited in the long run. Shortly after the oil freeze agreement was announced, crude prices went up from around US$ 40 a barrel in November to US$ 55 in January, but the beneficial effect of the deal started to wear off in subsequent months, when oil prices again slipped under US$ 50 a barrel in April. To boost the prices, OPEC members and hydrocarbon producers outside the cartel extended output cuts in late May 2017. They did not decide to raise production quotas, which would likely require months of additional negotiations. However, the oil price has since barely surpassed US$ 51 per barrel and saw a further drop in the beginning of June, showing that the market had anticipated a more powerful impact of the extended oil freeze agreement.

This suggests that the agreement’s long-term effect on crude price growth can be hard to sustain, although experts predict that the extension of the output freeze might bring oil prices up to US$ 60 per barrel in 2017. On the other hand, the agreement has not solved the global oversupply problem – the oil market was still oversupplied by around 500,000 bpd in the first quarter of 2017 and global stored oil volumes are accumulated at record levels. There are additional factors that mitigate the impact of the production cuts on the oil price and prevent the reduction of oversupply in the market. Major oil producers that do not comply with the OPEC oil freeze agreement, such as the U.S., Brazil and Canada, will likely boost their output to compete for market shares in order to benefit from the recovering crude price.

IMPLICATIONS: Azerbaijan continues to face financial problems due to the global drop in oil prices and was against this backdrop one of the crude producers outside the OPEC to join the agreement on oil production cuts. During the December 2016 meeting in Vienna between OPEC and non-OPEC countries, Azerbaijan agreed to cut its oil production by 35,000 bpd, in anticipation that the oil freeze accord will contribute to an increase and stabilization in world crude prices. The OPEC Monitoring Committee and Azerbaijan’s Ministry of Energy announced that during the first months of 2017, the Caspian oil producer was fully compliant with the oil production freeze accord. Furthermore, Azerbaijan decided to join the extension of the Vienna agreement, concluded in late May.

Azerbaijan still derives a large share of its revenue and GDP from hydrocarbon exports and is extremely vulnerable to shocks in the international oil market. Oil and gas products constitute 91 percent of Azerbaijan’s total export revenue and the oil sector accounts for 34.9 percent of its total GDP (2015). The prolonged plunge in oil prices is a serious blow to the country’s oil sector, which recorded a substantial loss of revenue in 2016. For the past six years, Azerbaijan’s oil output has been in steady decline, which is currently exacerbated by a shortage of production-enhancing investments caused by lack of funds in the budgets of oil producing companies. Moreover, the sharp fall in the price of Azerbaijani crude, which hit a record low in January 2016 at less than US$ 30 per barrel and barely surpassed US$ 50 at the end of the year, as well as its volatility reduces the profitability of oil production and exports. Experts calculate that the price of Azerbaijani crude needs to reach US$ 55-65 per barrel to ensure viability of oil output and export. Furthermore, Azerbaijan’s state energy company SOCAR currently faces fiscal risks due to its aggressive investment plans both domestically and abroad while the company experiences a substantial loss of revenue. In result, Azerbaijan currently cannot compensate for the loss of oil revenue with profits from natural gas exports, since the majority of gas revenues are used to cover expenditures related to the Shah Deniz-2 gas export project.

The oil price plunge has an adverse effect on Azerbaijan’s economy and has put severe pressure on its currency, the manat. In 2015, the Central Bank of Azerbaijan decided to depreciate the manat to preserve the central bank’s foreign reserve holdings, prevent the state oil fund (SOFAZ) from losing assets and relieve pressure on the budget. Nevertheless, these measures did not stop the currency depreciation, which continued through 2016. The devaluation of the manat affected the finances of many households and threatened the stability of the already weakened banking sector. The currency crisis resulted in other negative trends such as a rise in the inflation pressure coupled with a decrease in investments and falling consumer spending power, which are expected to continue throughout 2017. On top of this, Azerbaijan’s economy contracted by 4 percent in 2016 and is forecasted to achieve only a modest 1 percent growth in 2017. To relieve pressure on the state budget, which experiences a steady fall in key revenues from the extractive industry, Azerbaijani authorities have adopted austerity measures, such as postponing or cutting several state investment projects, raising the cost of public services, and increasing the taxation burden on property, small businesses and the non-oil sector.

CONCLUSIONS: It is too early to assess the long-term effects of the oil output freeze agreement on Azerbaijan’s economy, but experts already notice positive signs of recovery in the country’s revenue, which can be attributed to the crude price rebound. During the first four months of 2017, Azerbaijan raised its oil revenue by US$ 463 million compared to the same period in 2016. The oil price recovery has strengthened the manat, which unexpectedly gained 13 percent in value in February 2017 and according to state statistics recorded an overall 4 percent growth since January. Even tough negative economic trends such as high inflation, a decrease in public investments, and low consumer and business confidence will likely continue in 2017, experts from Moody’s rating agency predict that Azerbaijan’s economic growth can accelerate next year from the expected 1 percent in 2017 to 1.8 percent in 2018 on the condition that oil prices will stay above US$ 50 per barrel.

While a rise of oil revenues might be transient, several other factors could boost Azerbaijan’s economy in the medium-term. In the first three months of 2017 Azerbaijan increased its gas production by almost 3 percent in comparison with the same period last year and is expected to further increase gas output in coming years. Furthermore, the forecasted rebound of Russia’s economy growth in 2017 is expected to increase the rate of foreign remittances, which have fallen sharply over the past two years and negatively affected the income of many Azerbaijani households. Finally, Azerbaijan has accelerated the diversification of its economy, hoping to boost growth by developing the non-oil sector, especially in transportation, logistics, agriculture and tourism.

AUTHOR’S BIO:  Natalia Konarzewska is a graduate of University of Warsaw and a freelance expert and analyst with a focus on political and economic developments in the post-Soviet space.

More in this category: « Why Isolating Pakistan Will Not Solve Kabul's Problems Why the Sharp Downturn in Russian-Azerbaijani Relations? »
back to top