Azerbaijan, islamism, and unrest in Nardaran

On November 25-26, Azerbaijani law enforcement carried out a special operation in Nardaran, a township on the northern edge of the Absheron peninsula located 25 kilometers northeast of the capital’s center. The purpose of the special operation was to break the backbone of the Muslim Unity group, a purportedly militant Shiite organization. The context and implications of the Nardaran events have received little attention in Western media, despite the concerns raised both within and outside the region about Azerbaijan finding itself on the brink of religiously inspired civil unrest. 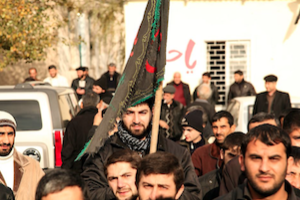 BACKGROUND: During the operation, five locals were killed, including four alleged religious extremists who resisted the law enforcement officers, along with two police officers. According to the authorities, four submachine guns, 12 grenades, three explosive devices, 10 Molotov cocktails, and seven knives and daggers were seized from the militants associated with the group. The arrest of the group’s reputed Shiite cleric and leader, Taleh Baghirov (Baghirzadeh), along with 14 accomplices, triggered mass protests in the township, with protestors setting up barricades and clashing with the police. In early December, Nardaran was still isolated from the rest of the country, with an extended police operation underway and power and telephone lines to the township shut off. The authorities have detained an additional two dozen locals as a result of the police operation, and claim that Muslim Unity intended to challenge Azerbaijan’s internal stability, constitutional order, and secular character by means of establishing a Shiite theocracy.

Azerbaijan has been considered one of the most secularized countries in the region. Along with Kazakhstan and Kyrgyzstan, Azerbaijan is regarded as the Soviet successor state with the weakest Islamic identity among its inhabitants. In fact, the very beginning of Azerbaijani national consciousness was marked by strongly anti-clerical sentiments, unprecedented in the Muslim world at the turn of the 19th and 20th centuries. The Azerbaijani Democratic Republic was the first Muslim-majority country to enact women’s suffrage in 1918. In the Soviet period, Islam was effectively relegated to the realm of private life. It played virtually no role in the country’s move toward independence in the early 1990s, with Azerbaijani nationalism being largely void of religious connotations. Although the country experienced a religious revival in the late 1980s and early 1990s, with hundreds of mosques and medreses, or religious schools, built and restored across the country, the return of Islam has largely been part of Azerbaijanis’ search for ethnocultural tradition and spirituality.

Nowadays, most Azerbaijanis self-identify as Muslims. But religious identity is rather nominal as it is self-ascribed ipso facto as part of an ethnic identity. Polls conducted in Azerbaijan demonstrate that although two thirds of Azerbaijanis self-identify as “believers”, usually less than seven percent consider themselves “firm believers.” At the same time, less than a fifth of the “believers” indicate observance of one of the five pillars of the Muslim religion: salah, or prayer. Most “believers” also disregard Islamic dietary laws concerning, for instance, the consumption of pork or other non-halal food. An average Azerbaijani consumes 10.6 liters of alcohol annually, and Azerbaijan is second only to Kazakhstan in the Muslim world, and ranks 38th of 188 countries in terms of alcohol consumption. Intriguingly, Azerbaijanis consume around 40 percent more alcohol annually than Georgians and around nine times more than Turks. Against this backdrop of weak religiosity, it comes as no surprise that no Islamic-agenda-centered parties with all-republican coverage, legal or illegal, have so far featured in Azerbaijani politics.

IMPLICATIONS: Nevertheless, the township of Nardaran has always had a special standing in Azerbaijan’s socio-religious landscape. Considered a stronghold of “religious fanaticism” in a largely secular country, Nardaran has been a universe of its own, with a significant share of its 8,000 inhabitants adhering strongly to Shiite Islam and the township’s streets being packed with women covered in Iranian-style chadors. Pork and alcohol are prohibited in Nardaran. Many Nardaranis have looked to Iran as a venerable example of socially just theocracy, despising the perceived decadence, “godlessness,” and immorality of Bakuvians next door. In return, many Azerbaijanis have regarded Nardaran as a “piece of the medieval age” and an Iranian province, rather than a typical Azerbaijani community.

They have pointed to the fact that most Shiite radicals including mullahs, often with strong ties to Iran, have stemmed from the township; that dozens of Nardaran-born males have travelled to Syria to fight in the ranks of the pro-Assad Shiite armed militias aided by Iran; and that this tiny township is home to both the banned Islamic Party of Azerbaijan and the Muslim Unity movement (see the 05/02/14 issue of the CACI Analyst). Indeed, many secular and pro-Western Azerbaijanis have regarded Nardaran as a hotbed of Iranian influence – Tehran's “Trojan horse” – in the post-Soviet nation, with strained relations to the Islamic Republic.

Nardaran is also one of Azerbaijan’s poorest areas. Despite being part of Baku with its striking richness and luxury, the current regime has made virtually no investments in Nardaran, with local unemployment ranking high and many local males forced to work outside the township. Symptomatically, Nardaran was the scene of largely socio-economically driven protests in 2002 and 2006, the latter resulting in three dead. Even before the recent events, local commentators have alerted of the township’s dire socio-economic situation – which has allegedly been a source of religious radicalization among part of the local population – and Baku’s lack of willingness to systematically deal with it. Hundreds of Nardaran inhabitants took to the streets in April 2013 following the re-arrest of Baghirov (Baghirov was imprisoned for a year and half in 2012-2013 mainly due to his organization of Iran-supported protests against banning the hijab in schools and universities) and other Shiite leaders accused of receiving external funding from Iran and heroin possession.

While Azerbaijani authorities have praised their own efforts in Nardaran, pointing to the destruction of a dangerous “terrorist group” posing an immense threat to the country’s stability, they have downplayed the socio-economic background of the Nardaran events. Instead, Baku has emphasized the use of violence by the members and supporters of the Muslim Unity group, which many locals have questioned. With no foreign media allowed at the site, no first-hand coverage by third parties is available on the course of the Nardaran events. The causes of killed locals and police officers remain unclear.

Interestingly, Baku has refrained from pointing to external sources – that is, Iran – of the unrest in Nardaran, although it has often done so in the past. Nevertheless, some Azerbaijani politicians and experts have spoken of the events as part of the Islamic Republic’s wider agenda to destabilize the country by playing the religious card (see the 02/08/12 issue of the CACI Analyst). Despite the existence of some hints at Tehran’s involvement in supporting anti-regime sentiment particularly among Azerbaijan’s Shiite-oriented population, including Tehran’s financial support for Baghirov’s organization, no evidence exists of an Iranian role in the recent violence in Nardaran.

Still, Iranian authorities have commented extensively on the Nardaran events, which according to the narrative in Iranian media are indicative of Azerbaijani authorities’ militant stance toward believers. Azerbaijani law enforcement are said to have violently entered a local Shiite mosque, behaving aggressively and shooting at Muslims during the prayer, and arresting Baghirov in the middle of his preaching. Mansour Hakikatpour, the deputy chairman of the Committee on Security and Foreign Policy in Iran’s Parliament, has appealed to Nardaran inhabitants to “activate themselves” following their standoff with Azerbaijani police to make sure “Azerbaijan’s authorities draw a lesson from the fates of the dictators of the region.” Hakikatpour also expressed a view widespread in the Islamic Republic, according to which Azerbaijan “gives freedom to homosexuals, while deploying violence toward the Shiites,” which is likely to bring about “vicious consequences.”

CONCLUSIONS: Secular opposition is virtually non-existent in Azerbaijan, where authorities have increasingly cracked down on civil liberties. While the authorities have created what many have termed a “puppet opposition” – as a counterbalance to “radical opposition,” that is, opposition interested in replacing Ilham Aliyev sometime in the future – some Azerbaijanis may be interested in turning to illegal religious parties as a viable alternative. In fact, recent years have seen a relative strengthening of groups adhering to militant Salafism and Shia-inspired “khomeinism.” While these groups are supported by external powers, particularly Iran in the case of radical Shiite groups, their potential to shape developments in the country will likely remain weak particularly due to the population’s indifference to their ideology. While militant or extremist groups may emerge from time to time, their lack of support from the local population will render them marginal and unable to challenge the current regime or Azerbaijan’s secular character. This explains why, despite the gawky means deployed by Azerbaijani authorities against these groups, they have been largely successful in quelling religiously imbued unrest.

More in this category: « Building on Kerry's Central Asian tour Armenia's constitutional referendum »
back to top