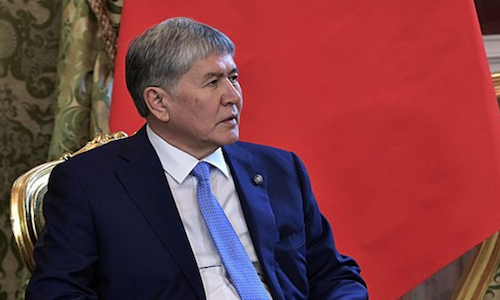 BACKGROUND: On November 24, 2017, Almazbek Atambayev handed over the office of president to his then-ally Sooronbai Jeenbekov, who instantly reciprocated with a first executive order that awarded the former president the title of Hero of Kyrgyzstan. Atambayev, thus, seemed to have fulfilled his objective of steering a loyal ally to power. However, soon the relationship derailed in the most dramatic fashion. Jeenbekov turned out to be no pushover prepared to allow the former president to continue to be in charge from behind the scenes.

Unhappy with Jeenbekov’s independent stance, Atambayev resorted to his trademark practice of throwing insults, this time in the direction of his erstwhile protégé. What followed was – even by Kyrgyz standards – an unprecedented purge from office of all of Atambayev’s closest allies, most of them arrested on corruption charges. Others, feeling the direction of the wind, defected to Jeenbekov’s camp. Left increasingly exposed, the net tightened further around Atambayev in June this summer when the parliament voted to strip him from his immunity from prosecution. Atambayev responded by barricading himself with his supporters in his residential compound in the village of Koi-Tash outside of Bishkek. Stating that he was armed, he vowed to resist any attempt to detain him.

In July, the Ministry of Internal Affairs summoned Atambayev for questioning in a criminal investigation three times, only for the ex-president to give the investigators the cold shoulder. On July 24, Atambayev played a final card, flying to Moscow for a meeting with President Vladimir Putin. Afterwards, Putin publically announced the need to cease the confrontation and unite around the current president for the sake of political stability. Back in Kyrgyzstan, Atambayev did not show any signs of constraint, however, arguing that it was too late to find a compromise with the current leadership.

On August 7, special security forces equipped only with rubber bullets twice tried to storm Atambayev’s fortress but were beaten back by his staunchest supporters; six members of the special forces were taken hostage and a deputy commander died from a gunshot wound. In order not to repeat the embarrassment, the Ministry of Internal Affairs brought in 3,000 police officers with special equipment to the site of the conflict the following day. They cut off all access to the area and, after a two-hour long confrontation, Atambayev finally surrendered. Dramatic video images soon emerged online, perpetuating the spectacle. Taken into custody at the State Committee for National Security, the prosecutor’s office has since charged Atambayev with an ever-expanding list of serious crimes, including conspiracy to murder, kidnapping, inciting mass unrest and preparing a coup in the country. Although Kyrgyz politics has a habit of throwing up surprises, it appears unlikely that he will ever set foot outside again.

IMPLICATIONS: There are several takeaways from Atambayev’s dramatic fall. First, there is the aspect of his disappointing tenure as president, which left him with largely no public support, save a small group of devoted followers. Indeed, in the period 2015-2017, Atambayev largely abandoned his duties as president of Kyrgyzstan. Instead of focusing on the country’s social and economic development and making good on his early promises of reforming the system of governance and implementing judicial reforms, Atambayev turned attention to preparing the ground for a prolonged hold on power after his presidency expired in the fall of 2017.

He actively engaged in the 2015 parliamentary elections on behalf of his Social Democratic Party (SDPK), helping it to emerge as the largest party in the parliament. He also pushed through a controversial constitutional referendum in 2016 that strengthened the role of the prime minister, providing a possible way for him to take up a strengthened premiership or at least to ensure that a loyalist would hold the post. In 2017, he selected then-prime minister Jeenbekov as his designated candidate for the presidential elections. He then campaigned so aggressively on behalf of Jeenbekov that he managed to provoke a serious diplomatic crisis with Kazakhstan in the process. Throughout these last years, Atambayev also staffed the SDPK with his closest allies and entrusted crucial state institutions in the hands of people with no other qualifications than being close to him, including personal bodyguards and a long-time personal chauffeur. Meanwhile, persecution of his major political opponents intensified. Through all this ran the thread of corruption.

Moreover, Atambayev’s expectation of Jeenbekov as an obedient figurehead turned out to be a grave miscalculation. Jeenbekov is a representative of a big family with its own ambitions and resources. For example, two younger brothers – Asylbek Jeenbekov and Jusupbek Sharipov – are member of parliament and ambassador to Ukraine, respectively. It soon became obvious that having acquired the highest priced state asset – the presidency – they had no intention to dance to the tune of Atambayev. Methodically and by judicial action, they have cleansed the government of Atambayev’s loyalists. The overall style of the secretive current leadership bears resemblance to another Kyrgyz president – Kurmanbek Bakiyev. After the tulip revolution in 2005, Bakiyev and his family, in their ruthless bid to usurp power, quickly expelled the fellow revolutionaries that initially supported his ascent to power.

By all accounts, in close proximity to the Jeenbekov’s operates a grouping led by the powerful former deputy chief of the customs service Rayimbek Matraimov, known in the country under the nickname “Rayim Million” alluding to his alleged financial appetite. One of his brothers is a member of parliament, another is akim (head of local administration) of the Kara-Suu district in southern Kyrgyzstan. Like the Jeenbekov family, the Matraimov family hails from the south. Both families emerged as dominant power players under the patronage of Atambayev’s presidency. However, since the transfer of power they have truly stepped out of the shadows. Time will tell how the dynamics between the leadership and Matraimov will evolve. In Kyrgyzstan, political alliances and loyalties can change in a flash.

There is little doubt that Atambayev and other high-level officials were enriching themselves from public offices; this is the essence of the Kyrgyz political system, which essentially serves as a market, from which to turn a profit. That said, the current leadership’s purges has nothing to do with a real fight against corruption. Jeenbekov is now doing the same thing first president Askar Akayev did in the latter part of his presidency and Bakiyev and Atambayev did thereafter. While this practice may be effective in the short term, it is highly risky in the longer term: when Jeenbekov’s term is up, he will likely be next in line. Given his past links to Atambayev and some of the figures presently surrounding him, there will hardly be any lack of potential ammunition to use for that purpose. From the incumbent’s perspective, there will be a temptation to undertake certain measures to try to avoid this scenario, including the possibility of establishing stronger authoritarian control and tinkering with the constitution. However, the fates of the previous presidents’ indicate that in the end such attempts will backfire. Kyrgyz society, politics and business are too open, too dynamic, and too divided not to push back against authoritarian policies.

CONCLUSIONS: History is repeating itself once again in Kyrgyzstan. Presidents come and go but corruption stays. As long as there is no commitment to cardinal reforms, especially in the judicial system, this produces a self-sustaining cycle of controlling corruption on the part of the incumbent coupled with selective anti-corruption campaigns spearheaded by a subservient judiciary against opponents. Time has long passed for expecting the current political class to break out of this cycle. Indeed, a major shift is around the corner in Kyrgyzstan. In fact, Jeenbekov may very well be the last representative of the Soviet-era generation to hold power in Kyrgyzstan. Then, with a new generation in power, there can be real expectations of a political transformation that truly connects the government with society.

Johan Engvall, Ph.D., is a researcher at the Swedish Defence Research Agency (FOI), and a non-resident senior fellow with the Central-Asia Caucasus Institute & Silk Road Studies Program. He is the author of The State as Investment Market: Kyrgyzstan in Comparative Perspective, published by University of Pittsburgh Press.

More in this category: « Kremlin Appoints New Government in Ingushetia Russia's Strategic Economic Projects in the Caspian: Reality and Perspectives »
back to top