March 5 marked the start of official campaigning for Armenia’s parliamentary elections, scheduled for April 2, after which a parliamentary system will replace the current presidential one. Yet these elections are unlikely to bring about any significant changes in either the economic and social spheres or in Armenia’s pro-Russian foreign policy, given the dominant position of the ruling Republican Party of Armenia (RPA). The opposition running for election is fragmented and short of resources, and will compete in an election system favoring the RPA. 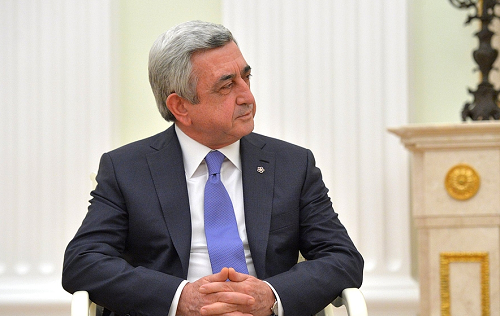 BACKGROUND:  The April polls will launch the final phase of the transition of Armenia's political system, from the current presidential to a parliamentary one prescribed by the constitutional amendments adopted in 2015 (see the 12/29/15 Issue of the CACI Analyst). President Serzh Sargsyan will remain in office for almost one more year to fulfill his five-year term, but there will be no more direct presidential elections, and from 2018 executive power will belong to the government led by the prime minister, with an almost equally powerful minister of defense.

The new election code adopted after the constitutional amendments has arguably made ballot stuffing and other fraud, which has been widespread during previous elections, less likely. However, the design of the election code skews the playing field in the RPA's favor. Before the constitutional referendum, promises were given that a parliamentary system would allow political parties to play a more important role. However, several observers have noted that smaller parties are in fact strongly disadvantaged and have little chance to overcome the five percent threshold on their own. Simultaneously, limitations have been introduced on the number of parties that could form a bloc, while the threshold for blocs is seven percent.

The previous mixed system of proportional representation and majoritarian vote in single-member districts has been replaced with one that combines national and district party lists. The latter encourage candidates from larger parties to compete also with each other in order to promote the party's rating, creating confusion among the voters. Whereas each single-member district previously had one wealthy government-affiliated businessman or a proxy running; the new system favors the inclusion of several government candidates as well as local gang leaders, who are capable of buying votes or intimidating voters, in the district lists. One of the intermediate results is that even before the deadline for registration of party lists on February 16, the amount offered for vote buying grew fourfold compared to previous elections, and has continued to grow afterwards.

IMPLICATIONS: Five parties and four blocs have been registered, although one of them, the Communist Party, is irrelevant. The RPA's national list is led by Defense Minister Vigen Sargsyan. Considering his only achievement so far – promoting the "nation-army" concept (see the CACI Analyst, 01/12/17) and imposing a new tax to finance it, a "patriotic" agenda will likely be the key issue of RPA's campaign. RPA's potential partners are the nationalist Armenian Revolutionary Federation Dashnaktsutyun (ARF) and the Armenian Renaissance (formerly the Country of Laws Party). Both have repeatedly used the same tactics: leaving the ruling coalition approximately one year before an election, adopting an ostensibly critical attitude towards the government, and then joining forces with the RPA in the next legislature. Both also share a loyalist pro-Russian attitude.

One the other side of the spectrum is the Free Democrats Party, currently the only party advocating Armenia's departure from the Eurasian Economic Union (EEU) and developing relations with the West. The Way Out bloc, formed by three parties – Bright Armenia, Civil Contract, and The Republic – was the only entity using a mechanism resembling primaries to form a candidate list. Although some parties in the bloc previously supported developing relations with the West, they have downplayed this agenda in order to make a larger coalition possible, resulting in a somewhat inconsistent approach towards both EEU membership and association with the EU.

The bloc formed by the Armenian National Congress (ANC) and the People's Party of Armenia is running on a platform formulated by ANC's leader, former president Levon Ter-Petrossian. He announced a "peace now" program at a party congress in December 2016, arguing that a compromise with Azerbaijan, including the return of several regions adjacent to Nagorno-Karabakh to Azerbaijani control, must be reached as soon as possible. Unsurprisingly, this proposal revived the habitual accusations of being "unpatriotic" and "defeatist" from different sides of the political spectrum, as most political actors favor maintaining the status quo in the conflict, or advocate recognizing the independence of Nagorno-Karabakh. As most critics of Ter-Petrossian's approach attack him personally instead of formulating counterarguments on the issue, there is little room for debate.

Another bloc has been formed around Gagik Tsarukyan, who was forced to abandon his political ambitions two years ago (see the 03/18/15 Issue of the CACI Analyst). Since then, Tsarukyan has been forgiven and even received decorations from President Sargsyan. Tsarukyan's return to politics began, evidently with Sargsyan's approval, in fall 2016. Reminiscent of the Soviet practice of "initiatives from below," activist groups praising Tsarukyan's generosity during previous election campaigns started advocating for his return. Culminating in a televised speech in January, the campaign once again elevated Tsarukyan to the chair of the Prosperous Armenia Party (PAP). He then formed the Tsarukyan bloc, in which several fringe parties joined the PAP and gained access to Tsarukyan's financial resources, though without significant representation on the candidate list.

Former Defense Minister Seyran Ohanyan, who has been a vocal critic of the government after his resignation in October 2016, has joined the Unity Party formed in 2016 by former Foreign Minister Vardan Oskanyan and other former members of PAP. Ohanyan has even admitted that the country has political prisoners – something that government officials have been denying vehemently. After attempts to find other partners, including a short-lived alliance with the pro-Russian Democratic Party led by a Soviet-era Communist Party leader and a former dissident who served four prison terms in the USSR, they formed a bloc with the Heritage Party. Given the latter's previous opposition activities, its readiness to join two former officials who share responsibility for the bloodbath of March 1, 2008 (10 people were killed as the army was illegally deployed against opposition protests against alleged electoral fraud) became a shock for many observers. Some prominent members of the Heritage Party who opposed the alliance became targets of a smear campaign and summarily left the party.

Before the official beginning of campaigning on March 5, the Ohanyan-Oskanyan bloc became the main target of RPA's propaganda machine. One reason is that the bloc leaders, and especially Ohanyan who radically changed his official rhetoric after losing his post, are considered traitors by the RPA. Another important reason is that the bloc is most probably backed by the ambitious former president Robert Kocharyan, whose financial and media resources would make it the most dangerous competitor for RPA. Moreover, the ARF and Armenian Renaissance could also change sides and jump on the bandwagon, should Kocharyan come to be perceived as a likely winner.

The RPA has already dealt with another "traitor" – former Prime Minister Hovik Abrahamyan. He remained the deputy chair of RPA after his resignation in September 2016. However, in January Abrahamyan paid a short visit to Moscow and then left his party leadership position and made some critical statements. The party establishment reacted harshly, suggesting that an investigation into the origins of Abrahamyan's assets could be launched, whereby Abrahamyan abandoned his ambitions.

CONCLUSIONS: As suggested previously, considering the RPA's financial and administrative resources, the likely outcome of the elections is a formal multi-party parliament with a de facto strongman rule (see the 12/29/15 Issue of the CACI Analyst). Aside from the parties and blocs that adopt oppositional rhetoric only for the campaign period, the others lack resources, as well as the willingness to overcome personal conflicts. It has been habitual for the ANC, Free Democrats, and the Way Out bloc to accuse each other of making deals with President Sargsyan. Their ability to pass the threshold remains questionable.
The populist rhetoric of the Ohanyan-Oskanyan and Tsarukyan blocs, combined with available campaign resources, will likely make them relatively successful. This is true especially for Tsarukyan, as he got the president's endorsement specifically in order to split the dissatisfied electorate. These blocs are also unequivocally pro-Russian in their foreign policy preferences.

The RPA, seeking maximum external legitimacy, may also seek to persuade the U.S. and the EU to be "pragmatic" and to avoid strong criticism of the shortcomings during the campaign and the voting process. Prime Minister Karen Karapetyan's lavishly repeated traditional mantras about the fight against corruption and other issues during recent meetings with American and European ambassadors could serve that goal.

More in this category: « China’s Long March into Central Asia: How Beijing Expands Military Influence in Tajikistan Central Asia: An Opportunity for the Trump Administration »
back to top