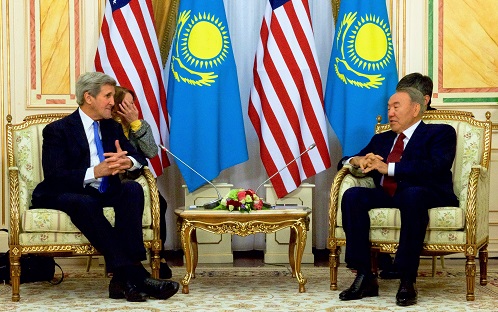 BACKGROUND:  The recent death of Uzbekistan's President Islam Karimov has led his successor Shavkat Mirziyoyev to draw back from some of Karimov's most contentious domestic and regional policies while retaining the foreign policy of balancing relations with outside powers. While Uzbekistan is not going to transform itself magically overnight into a democracy, it has moderated the Karimov-era tensions with all of its neighbors and has already released some prisoners whose incarceration violated human rights. The government is now even talking of currency liberalization, which has caused optimism amongst regime critics, and is also reorganizing the political structure of the state. Undoubtedly, U.S. and other foreign firms will benefit from this major policy change if it is implemented.
Meanwhile, in Kazakhstan President Nazarbayev's announcement of reducing his powers in favor of the legislative branch and the government also opens for a freer play of political and economic forces from which the U.S. could benefit by its superior economic clout and by Kazakh elites' understanding that Washington's presence balances that of Moscow and Beijing.

Both Kazakhstan's and Uzbekistan's liberalizing and tension-reduction policies also play to the strongest cards of the U.S. in the great power competition for influence in and over Central Asia – namely its willingness to continue fighting for security and stability in Afghanistan, as well as the potential for much greater use of U.S. economic power. The U.S. army and NATO are still engaged in fighting the Taliban and the terrorist organization known as the Islamic State in Iraq and Syria (ISIS) in Afghanistan, which both pose threats to Central Asian states. Moreover, all Central Asian states crave U.S. business, trade, and investment support in order to allow them to balance between the hegemonic inclinations that Beijing and Moscow constantly display towards them. An increased U.S. presence would be welcomed in Central Asia, and with it could come private initiatives to further reform in both Uzbekistan and Kazakhstan, which could also ameliorate human and civil rights deficits in both countries and by example among their neighbors

Moreover, if the U.S. were to disengage completely from Afghanistan, great power rivalry would probably reemerge quite rapidly. Russia is clearly playing a double game in Afghanistan, ostensibly supporting the government but also visibly building ties with the Taliban and Iran. Russia, China, and Pakistan are advocating peace talks but, as reported by U.S. commanders, Moscow and Tehran are also promoting the Taliban. Thus Russia supports the Taliban against ISIS as part of a future government in Afghanistan that would leave a divided country open to Russian (and presumably Chinese) influence while curtailing the U.S. presence.
While these tactics hardly benefit either Kazakhstan or Uzbekistan, not to mention the smaller Central Asian states, they comport with Russia's main goals, namely to check the growth of ISIS while retaining its influence in Central Asia.
China will also join with Russia to curtail U.S. influence in Central Asia, including Afghanistan. But China is also clearly undertaking a more tangible military and security presence in Central Asia, no doubt aware of Russia's double game while also seeking to protect its huge regional investments.

IMPLICATIONS: Given these great power machinations, the Trump Administration should support the new Uzbek administration's efforts to decompress its political system and Nazarbayev's reforms. By demonstrating this support by tangible economic and military means – providing Central Asian governments with training and access to weapons to defend themselves against terrorism and insurgency (and Russian threats) and facilitating U.S. investment by private firms in Central Asia, the U.S. should use that influence to obtain progress on a liberalized economic climate and improvement in human rights conditions.

Previously, the U.S. has struggled to compete with China given the conditions the U.S. attaches to investments and the unpropitious investment climate in Central Asia due to local governments' rent-seeking policies and restrictions on trade and investment. It is unlikely that the Trump Administration will follow the previous U.S. practice of publicly calling for reforms. It could, however, use the carrot of increased investment to say privately to regimes that it would be regarded positively if they moved forward on certain reforms, an approach that might actually work. Without trade and investment, there is little incentive for Central Asian governments to heed advice from the U.S. on issues such as human rights. Indeed, as Secretary of State Kerry told a Kazakh audience "economic policy is also foreign policy." This certainly is the lesson of China's ever-growing economic presence in Central Asia.

Given the threat of the Taliban and ISIS from Afghanistan, Central Asian and particularly Uzbek concerns about terrorism, though long exaggerated, are not unfounded. Several hundred Uzbek militants have reportedly gone to fight with ISIS in Syria. There has been a longer history of Uzbek fighters in Afghanistan and Pakistan, particularly organizing under the banner of the Islamic Movement of Uzbekistan (IMU). Therefore, a program that sustains U.S. engagement in Afghanistan but also enhances investment in Central Asia, particularly these two countries, proves U.S. commitment to Central Asia's development, stability, and security. It would also allow Presidents Nazarbayev and Mirziyoyev to strengthen their states through economic, administrative, judicial, and political reforms even to the point of freeing some dissidents as well as offer an alternative partner to balance Russia and China.

Even if Washington ignores the terrorist threat (which is admittedly unlikely given the rhetoric of President Trump and his team), Russia and China will not. Moscow, Beijing and Islamabad have already had meetings to pave the way for an Afghan peace treaty. They have now invited the Afghan government to the next round of their trilateral peace talks, which have nevertheless failed to bring about peace in Afghanistan. While Moscow may try to make a deal with the Taliban as its recent efforts suggest; China is becoming even more draconian in its campaigns, such as confiscating the passports of all Xinjiang residents in the name of countering terrorism. There is reason to believe that China has growing reason to fear terrorism, especially given its sizeable investments in Pakistan and Central Asia as part of its Belt and Road Initiative and the China Pakistan Economic Corridor, and the signs of increased anti-Chinese terrorism like the attack in 2016 on the Chinese embassy in Bishkek.

Kazakhstan's and Uzbekistan's foreign policies also dovetail with U.S. objectives in Central Asia. Uzbekistan has undertaken several well-publicized moves to reduce tensions with Tajikistan and Kyrgyzstan and to reach out to Turkey, which seeks its own greater engagement in Central Asia. The improvement of relations among Central Asian governments also facilitates enhanced economic-political cooperation among them, a long-standing U.S. objective. Interstate cooperation in Central Asia, especially involving both Kazakhstan and Uzbekistan, strengthens the economic independence of these countries from Moscow and Beijing, as well as their overall domestic capabilities and regional stability. Meanwhile, Kazakhstan has long made clear its reliance on the U.S. as a balancer vis-à-vis its two imperially minded neighbors.

CONCLUSIONS: For too long, the Obama Administration had no discernible agenda for Central Asia other than prosecuting the war in Afghanistan. The C5+1 initiative only got started in 2015 and is still not supplemented by a regular program of high-level visits or investment that would truly balance either the Russian or Chinese presence. Moreover, there is no sign as to what the Trump Administration will do in regard to Central Asia. Indeed, at one point the Obama Administration publicly supported China's policies that became subsumed under the Belt and Road Initiative. That endorsement testified more to the absence of U.S.-led ideas and resources towards Central Asia than any suggestion of strategic engagement with China. Trump now has an opportunity to cultivate a new agenda based on the power of U.S. corporate private investment, which would be a true win-win for local governments and for U.S. interests. It is also the only long-term way to influence local governments to take U.S. human rights values seriously, and it offers Central Asian states a truly multi-vector policy to balance Russia and China. Moreover, increasing U.S. training, investment and trade will not incur serious economic costs for the U.S. budget and enhances the domestic security of Central Asian states against potential terrorist threats.

This program of action is a multi-dimensional strategy based on real trends like the Kazakh and Uzbek reform programs and would undoubtedly find support within both countries who crave U.S. recognition and are undertaking overdue positive steps. A program based on expanding U.S. economic and thus political influence in Central Asia would balance China's drive for economic-political hegemony here and be welcomed by local governments. While these policies are not flashy or headline-grabbing, they are substantive and long-running and could alone provide changes needed to accomplish the interests of the U.S. and Central Asians in their independence, security, and greater prosperity.

More in this category: « Armenia’s Political Forces Get Ready for Parliamentary Elections Russian Gas in the Southern Gas Corridor Could Undermine the EU’s Diversification Plans »
back to top