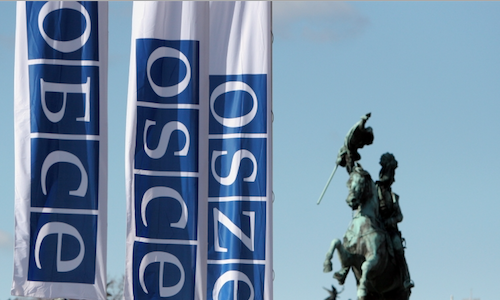 BACKGROUND: After the intensive exchange of hostilities in Nagorno-Karabakh between April 2 and 5, 2016, which saw the use of an unprecedented amount of heavy weapons was used and resulted in a number of casualties, it seemed that the mediation efforts of the OSCE Minsk Group co-chairs were about to intensify. However, considering the total absence of mutual trust between the conflicting sides, it is rather unsurprising that the co-chairs’ meetings with the presidents of Armenia and Azerbaijan in Vienna and St. Petersburg did not produce any practical results. A new phase of the negotiations can be expected with the appointment of a new U.S. co-chair to replace James Warlick, whose mandate ends on December 31. (In December it was announced that the respected recently retired U.S. Ambassador Richard Hoagland has been appointed to the post). Yet on the other hand, the start of the campaign for Armenia’s parliamentary elections will likely, albeit informally, put the negotiation process on hold.

The internal political tension in Armenia after the shock caused by the combat in April has seemingly eased as Russia resumed supplying weapons to Armenia after a long delay. The Independence Day parade on September 21 displayed Iskander mobile short-range ballistic missiles and other new weaponry, suggesting additional deterrence capability. A cabinet reshuffle also took place in September, raising some hopes for a “technocratic” government (see the 10/21/15 Issue of the CACI Analyst).

Meanwhile, the de facto authorities of Nagorno-Karabakh have used the relatively calm period to adopt a new constitution, including one significant change: the draft version uses the name of a historical Armenian province, Artsakh, instead of the Soviet-era toponym. That move, not insignificant with regard to the conflict resolution process, has a deep symbolic meaning and highlights the influence of the Nagorno-Karabakh issue on Armenian politics.

The substance of the negotiation process will be widely discussed during the campaign preceding next year’s elections, and the emotional component cannot be ignored as some factions of the opposition will demand an outright rejection of any territorial concessions. In mid-November, Armenia’s President Serzh Sargsyan claimed in an interview with Russia’s RIA Novosti agency that in 2008-2011, a settlement plan providing for a withdrawal of Armenian forces from regions outside the former Nagorno-Karabakh autonomous region in exchange for a binding referendum had almost been adopted, but Azerbaijan rejected it at the last moment. Whether true or not, Sargsyan’s admission of the possibility to cede certain territories is a potential trigger for the hardliners’ campaign.

IMPLICATIONS: Some hardliner rhetoric on the opposition’s behalf is probably even useful for Sargsyan and the Republican Party of Armenia (RPA), as it might allow the ruling party to appear as a sensible political force before foreign partners. The authorities will certainly seek additional external legitimacy and financial aid (particularly, an increase of aid from the European Union is awaited), as an improvement of the country’s economic situation does not seem plausible.

In the mentioned interview, and at a meeting with Vladimir Putin a few weeks earlier, Sargsyan also claimed that Armenian exports grew after joining the Eurasian Economic Union (EEU). Such claims even contradict official statistics. Besides, Sargsyan blamed Western sanctions for causing Russia’s economic decline and its unfavorable consequences for Armenia. Like other Armenian officials, Sargsyan failed to mention the main cause of decline – Russia’s faulty economic structure, completely dependent on hydrocarbons exports and trodden by extreme levels of corruption. In addition to the decline in trade turnover, Russia’s economic decline sharply reduced the amount of remittances from Armenian citizens working in Russia – the main source of foreign currency for Armenia. The reluctance of Armenian officials to admit that the long-term reasons for Russia’s economic decline are located in the Russian economy itself makes fundamental reforms even less likely.

The tax code, amended just before the formation of a new cabinet in September, has already resulted in unfavorable outcomes for small and medium businesses. The struggle against monopolies promised by the newly appointed Prime Minister Karen Karapetyan, has also raised serious questions. For example, the widely publicized licensing of a new motor fuel importing company was compromised as soon as it was revealed that the company had been registered just a week before Karapetyan’s appointment, with a registered share capital of 100,000 AMD (about US$ 210).

Also, despite Karapetyan’s promises to dismantle the monopolies in all spheres of the economy, investigative journalists managed to get a long list of goods not allowed for commercial import by any company. The list, which was intended for internal use of the government structures, particularly the customs service, includes more than 300 items – foodstuffs, household appliances, electronics, and so forth. Most of the listed high-demand goods are produced or imported by companies owned by politically connected oligarchs, many of whom are RPA members occupying seats in the parliament. This indicates that they will not face competition.

Another move of the new government – the introduction of a new tax to fund some of the measures related to the “nation-army” concept (see the 10/21/15 Issue of the CACI Analyst) – also aims to leave the oligarchic economic structure and its clients’ profits intact. The draft law, swiftly adopted by the parliament, provides for a fixed amount to be paid monthly by all employees in both the public and private sectors. Therefore, low-income workers will have to pay a significantly larger share of their income.

The adoption of a decision to reduce the natural gas fee from January 2017 by 5.3 percent for households and by 15.65 percent for industrial consumers, possible only by means of a concession made by Gazprom, as well as rumors about a possible reduction of the electricity fee, seem to be the only good news for Armenia’s population as the socioeconomic situation is concerned. A watchdog organization, the Union of Informed Citizens, called these fee reductions “Gazprom’s interference in the elections.” This opinion is quite reasonable, considering the previous history of arbitrary fee increases.

In addition to already adopted laws and governmental decrees, the decision of Karapetyan and his cabinet members to join the RPA announced in late November, seems to end the story of a “technocratic,” reform-minded government. Moreover, in an absurd manner, it was announced that following Karapetyan’s decision, 7,000 people joined the party on the same day.

CONCLUSIONS: As Armenia’s presidential system will be replaced with a parliamentary one after next year’s election, further attempts to conceal that the government’s forthcoming actions will aim to secure the RPA’s electoral success at any cost seem superfluous. As suggested previously, the most likely outcome is a formal multi-party system with a de facto strongman rule (see the 12/29/15 Issue of the CACI Analyst). Armenia’s dependence on Russia will likely grow further, and it remains to be seen which additional political concessions Moscow will demand in addition to the control it has recently gained over Armenia’s air defense system and the agreement to create a joint military unit.

More in this category: « Abu Zar and Al Qaeda’s presence in Central Asia Russia and Armenia establish joint ground forces »
back to top