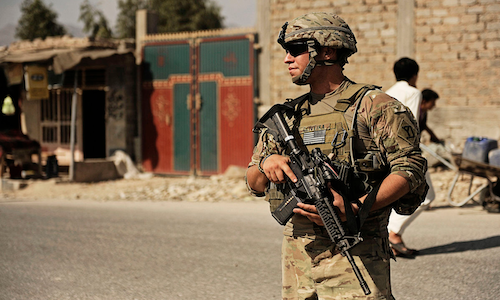 BACKGROUND: The length and topography of Turkmenistan’s, Uzbekistan’s and Tajikistan’s frontiers with Afghanistan precludes effectively sealing their borders. Turkmenistan’s frontier is 462 miles (744 kilometers) and Uzbekistan’s 85 miles (137 kilometers). Tajikistan’s 888 mile (1430 kilometers) Afghan border snakes through the Pamir mountain range. Except for neutral Turkmenistan, the post-Soviet Central Asian states have full membership in three international organizations, which they can potentially draw upon to bolster their security. Both Tajikistan and Uzbekistan are members of the Commonwealth of Independent States (CIS), while Turkmenistan has associate member status. Tajikistan is also a member of the Collective Security Treaty Organization (CSTO), while Tajikistan and Uzbekistan are full members of the Shanghai Cooperation Organization (SCO). Coordination of national antiterrorist policies by these organizations has already begun.

On March 12, representatives of the border agencies of Russia, Kazakhstan, Kyrgyzstan, Tajikistan and Uzbekistan as well as the Coordination Service of the Council of Commanders of the Border Troops (SKPV) met in Samarkand to discuss the situation on the CIS’s southern borders and formulate measures to prevent infiltration by terrorists and extremists into CIS territory. Uzbekistan’s State Security Service (SNB) noted in a press release, “During the meeting, the situation on the external borders of the CIS member states with Afghanistan was analyzed, as well as its development trends for the near future. In particular, an exchange of views took place on the situation in the northern border regions of Afghanistan.” The recommendations generated by the meeting will be discussed during the next SKPV meeting in Yerevan in April.

SCO counterterrorist activities date back to 2004, when members established the Regional Anti-Terrorist Structure (RATS) at an SCO summit in Tashkent, followed by recurring counterterrorist military training exercises. In October 2007, the SCO signed an agreement with the CSTO in Dushanbe to broaden cooperation on regional issues, including transnational security, crime and drug trafficking. A CSTO initiative with the potential to provide a unified response to regional instability is the 2009 agreement to create the Collective Rapid Reaction Force (KSOR) acceded to by five of the alliance’s seven members.

Such self-defense activities are prudent in light of the regional skepticism about the Taliban’s depth of commitment to its peace agreement. Underscoring the caution is the fact that since the October 2001 U.S.-led invasion drove them from power within two months, the Taliban has subsequently killed tens of thousands of Afghan civilians in its drive to recapture power. The Taliban has sheltered several terrorist groups while largely funding itself by fueling Afghanistan’s soaring drug trade, currently estimated to produce 90 percent of the world’s opium.

The sobering reality that the Taliban currently control or contest more territory, roughly half of the country, than at any other time since 2001 adds to concerns about the country’s political stability in the aftermath of the withdrawal of foreign forces. Further heightening skepticism about the durability of the agreement, successive U.S. administrations have sidelined the Afghan government for years, first by refusing to allow it to be involved with the negotiations and most recently by signing the deal without Afghan President Ghani’s government as a partner. Despite the accord, violence between the Taliban and Afghan government forces continues, albeit at a reduced rate. Even Kabul is not immune; on March 25 an Islamic State jihadi attacked a Sikh temple to “avenge Muslims in Kashmir,” taking 80 hostages and killing 25 before he was killed by security forces.

IMPLICATIONS: The January 1973 U.S. disengagement agreement with North Vietnam ostensibly allowed the U.S. to withdraw from the Vietnam conflict with “peace and honor.” Similarly, the February 29 agreement with the Taliban is a tactical maneuver allowing the U.S. and its allies to emerge from their 19-year-old Afghan campaign relatively calmly, permitting Trump to appear to fulfill his 2016 campaign pledge to stop “endless wars” and bring home thousands of U.S. troops during an election year. Adding to perceptions of the arrangement’s fragility, the strictly bilateral agreement excluded input from the Afghan government, much less Afghanistan’s neighbors.

As for Afghanistan’s future, it seems likely that without at the very least U.S. fiscal support, Ghani’s government has little chance of surviving against the Taliban, which has been attacking Afghan government forces almost continuously after the agreement.

While confident prognostications about Afghanistan’s future are largely impossible, there are troubling signs that its instability will continue, not necessarily confined within the country’s borders

Indeed, the Taliban represents the agreement radically differently comparing to the West. On February 29, minutes after the Doha agreement, Taliban leader Hibatullah Akhundzada issued a statement “regarding Termination of Occupation Agreement with the United States” on the movement’s “Voice of Jihad” website. Akhundzada noted that “…after the allied forces led by America transgressed against our homeland, the Islamic Emirate representing the Afghan nation, with the Divine Help of Allah (SwT), finally reached an agreement about the termination of occupation of Afghanistan following nearly nineteen years of Jihad and struggle. …This victory is the collective victory of the entire Muslim and Mujahid nation….”

Afghanistan’s neighbors may take solace from the fact that the Taliban has a nationalist-focused agenda of re-creating its Islamic Emirate. Yet al-Qaeda, which maintains a globalist agenda, congratulated the Taliban and the Afghan people on the peace deal, calling it “a historic victory” for the mujahidin. This was al-Qaeda’s first official comment on the development via its official outlet al-Sahab on the RocketChat and Telegram messaging platforms on March 12.

Such pronouncements have impelled Afghanistan’s northern neighbors to extend their cooperation beyond rhetoric and multilateral meetings. Uzbekistan and Tajikistan signed a “Partnership 2020” agreement on military cooperation. On March 11, large-scale Tajik-Uzbek anti-terror exercises, extending over four days, began at Tajikistan’s Fakhrobod training range, 19 miles (30 kilometers) south of Dushanbe. The exercises involved aircraft, armored vehicles, artillery and small arms in a joint training exercise to repel the infiltration of terrorists from Afghanistan. Tajikistan’s Defense Minister, Colonel General Sherali Mirzo oversaw the bilateral exercise. The inclusion of aircraft is significant; as neither the Taliban, nor any of the terrorist groups operating in Afghanistan have elements of air power, control of the sky has provided the decisive edge in Western military operations there. Furthermore, while Turkmen, Uzbek and Tajik military assets are relatively modest, those of its fellow CIS, CSTO and SCO member Russia are not and can potentially provide significant military backup in worst-case scenarios.

CONCLUSIONS: The U.S. agreement with the Taliban is in reality a face-saving tactical maneuver allowing the U.S. and its NATO allies to exit their 19-year-old Afghan campaign. In the ensuing security vacuum, post-Soviet Central Asian frontline states grapple with various troubling estimates that the ranks of the Taliban contain 10,000-15,000 foreign citizens, at least half of which are from Tajikistan, Uzbekistan, and Kazakhstan. Political and security instability seems to be Afghanistan’s fate for the foreseeable future. The former is compounded by the contested September 2019 presidential election; the latter by a threat of diminished U.S. fiscal support for the government. U.S. Secretary of State Mike Pompeo proclaimed on March 24, in the absence of a resolution of the Afghan presidential election, that the State Department was slashing Afghanistan aid by US$ 1 billion, threatening to cut another US$ 1 billion in 2021, as the political bickering between Ghani and Abdullah “poses a direct threat to U.S. national interests.”

As Washington further downsizes its presence in “the graveyard of empires,” whatever occurs in Afghanistan’s post-Western military environment, Kabul’s northern neighbors are discreetly and assiduously erecting a “cordon sanitaire” behind the wall of possible Russian and Chinese military support to ensure the chaos remains on Afghanistan’s side of their shared frontier.

Dr. John C. K. Daly is a Nonresident Senior Fellow of the Central Asia-Caucasus Institute; current work includes monographs on the development of Eurasia’s railways and the dissolution of the Soviet Navy.

More in this category: « Armenia Seeks Re-Energized Ties with Georgia New Strategy, Old Game: The Realigning Geopolitics of Central Asia »
back to top