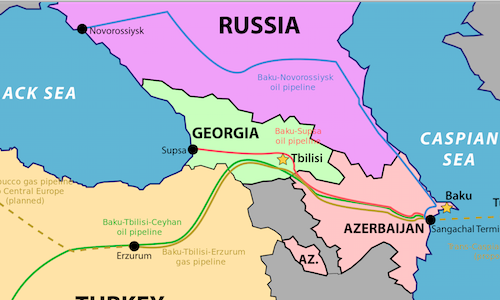 BACKGROUND: To be sure, we should not over-exaggerate these trends or discount forces making for instability and higher risk but we should also not simply dismiss the positive signs of future trends. The aftermath of the abortive Turkish coup of July 15 is producing great and well-deserved anxiety about Turkey’s domestic and foreign policy future and the reports that Turkey will resume consideration of the Turk Stream pipeline from Russia are of particular significance. It is clear that one goal of Turk Stream, beyond isolating Ukraine and splitting the EU, is to minimize if not eliminate the role of Caspian providers, including Azerbaijan, in Turkey’s gas balance. Thus there is real concern about Turkey’s economic, political, and foreign policy agenda, not to mention its political stability. Likewise, reports of the renewal of the Burgas-Alexandropoulos oil pipeline portend a parallel Russian effort to undercut Caspian oil exports. Another destabilizing factor is the fact that there is still no agreement on the legal status and disposition of the Caspian Sea and continuing signs of naval buildups among the littoral states.

However, while Russia is still trying to promote either South Stream or Turk Stream, as long as the situation in Ukraine remains unresolved, the EU will likely block those alternatives as well as the Burgas-Alexandropoulos oil pipeline. Moreover, it is unlikely that Russia itself has the capital to build either of these alternatives, and in any case dispassionate economic analysis of both South Stream and Turk Stream shows that neither of them are economically viable. This opens for not just the continuation of the Trans-Anatolian pipeline connecting to the Trans-Adriatic pipeline (TANAP-TAP) for gas, but also for the expansion of the interconnector network in Southeastern Europe.

Specifically the tripartite agreements among Ukraine, Bulgaria, and Romania, on the reversibility of interconnectors between Romania and each of the other two countries, opens up prospects for gas to go from Ukraine to Bulgaria and Greece and further into Europe through the TAP or by sea or interconnector to Italy. But given the construction of interconnectors between Turkey and Bulgaria and between Turkey and Greece as part of the TANAP-TAP pipeline, these agreements also mean that Azerbaijani and potentially other Caspian gas can now go directly to Ukraine or to countries in the Balkans other than Greece and up the Adriatic coast. Since gas flows through these interconnectors will be reversible, Azerbaijan could ship gas either to Turkey or to Ukraine and it would go from either destination to more distant markets in Europe.

In the longer term, as these projects are completed along with others further north and west that connect to these interconnectors, gas will be able to come to Europe through multiple ports of entry and go virtually anywhere on the continent. When the Lithuanian liquefied natural gas (LNG) terminal at Klaipeda and the Polish terminal at Świnoujście come online, they will connect to interconnectors to the south, which will link up with those in the Balkans and connect to Ukraine. Assuming rising demand, as most forecasts seem to suggest, by the middle of the next decade an integrated European market will be coming into view as a real possibility.

IMPLICATIONS: The gradual and admittedly long-term creation of this integrated network will transform the European gas market and economy, but it will also have a substantial effect on Eurasian politics. These processes and projects, to the extent that they do materialize, will reduce Russia’s and any other power’s capability to use gas as a political tool. Just as the international oil market is much less politicized because of the diversity and fungibility of oil supplies, so too the increasing multiplication of gas suppliers will foster that trend to depoliticize gas supplies. It is important to realize that this will not deprive Russia of gas revenues given the existing infrastructure already in place, Russia’s gas and oil production capabilities, and its proximity to European markets. But these trends will substantially reduce if not eliminate efforts by Moscow to politicize the use of gas for its own individual benefit.

Yet all these trends will enhance the security of Caspian producers and may actually help resolve the thorny issue of the status of the Caspian Sea, which would allow for the expansion of littoral states’ exports to Europe. Certainly the realization of these projects, and especially in a condition of rising demand, will further integrate all CIS producers to Europe in a more intimate and simultaneously less conflictual manner. The political heat will be removed from these relationships, which will in time become more purely commercial transactions.

Furthermore, to the degree that the integration of a single European market under EU auspices with common rules and standards takes shape, the stability of supply and of markets will benefit both producers and consumers. It is quite unlikely that we will see energy prices skyrocket to the levels of the past, especially given the advent of renewables, the limits on fossil fuels for environmental reasons and the globalization of production capabilities. However, mutually beneficial equilibrium prices will become a real possibility. In turn, this provides a greater breathing space for producers to secure their societies against the shocks of a boom and bust energy market that could lead to instability at home since these producers depend on energy prices to stay in power. And since greater economic integration implies greater political integration, we could well see a longer-term trend setting in to encourage and promote a greater diversification of capabilities within producing countries, making them less vulnerable to the vagaries of the energy market and thereby broadening the basis of their own stability.

The construction of interconnectors, the attainment of what might be the first signs of a less volatile energy market and a measure of price stability within a bounded framework, plus signs of rising European demand are all good auguries for the middle and long-term future. Yet the most important signs are the steady, if slow and unobtrusive, progress towards building a single European energy market. This process must be encouraged, not just for the security of European states who consume Eurasian energy, but also for the security of the producers given Russia’s insistent politicization of the energy market for geopolitical purposes.

In the long term, the security of the producers includes Russia, which would benefit from the depoliticization of energy and the necessity of building a more broadly based economy. This would increase the country’s wealth and probably work to break down the astounding inequality of income and wealth distribution. And as liberal political theory observes, to the extent that purely commercial motives and outcomes supplant geopolitical ones, the incentives to conflict diminish over time.

Moreover, to the degree that international gas is depoliticized, producers gain not just security but also substantially increased opportunities for marketing energy abroad free of political interference. This includes East Asia, the new horizon for energy sales. Indeed, if Europe can integrate its gas market under stable rules; that will have a similar gravitational pull upon Asia, over time depoliticizing that market and allowing for new infrastructures that bind suppliers and consumers together.

CONCLUSIONS: Admittedly, much can go wrong between today and the projected dates for the completion of current European and other projects like TANAP-TAP, resulting in more upheavals and insecurities. But the gradual accretion of trends now coming into view makes it possible to envision what long-term futures look like if creative and positive leadership is applied to current projects and developing trends. Both political leaders and scholars like to talk about win-win solutions but in fact it is gradually becoming possible to envision such solutions in the gas and oil markets of Eurasia. Now we must jointly work to realize them.

More in this category: « The North Caucasus insurgency: weakened but not eradicated Prospects of Turkmenistan-Iran gas cooperation »
back to top