Ahead of parliamentary elections, pressure builds on two Georgian parties

On March 11, footage allegedly showing an intimate scene involving one of the leaders of opposition party Our Georgia-Free Democrats (OGFD) was leaked in Georgian social media. The anonymously posted video was secretly recorded, triggered anxiety among the Georgian public and was strongly condemned by the government, media and watchdog groups. 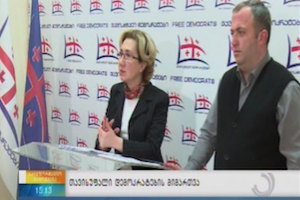 The Georgian news agency responsible for spreading the video came under enormous pressure, compelling the media outlet to sack one of its editors. PM Giorgi Kvirikashvili termed the case a “blow to the state” and “blackmail of the entire society.” He pledged that an investigation into the case would be launched immediately and that those responsible for producing and publishing the video would be punished “in an exemplary manner.” However, the Prosecutor’s Office (PO) has so far achieved no tangible results.

In the end of February, unknown perpetrators shot and wounded another leader of the OGFD, the former State Minister for European integration Alexi Petriashvili. The crime took place at midday when he was visiting his friend’s grave at a cemetery in the Saburtalo district of Tbilisi. Although police arrested one of the suspected offenders after several days, Petriashvili denied familiarity with him and asserted that the case should not be considered solved unless the person who “ordered” the attack is arrested.

The MP by-election in the Sagarejo single-mandate constituency in eastern Georgia took place on October 31. The RP candidate Tamar Khidasheli narrowly defeated her rival Irma Inashvili, leader of the pro-Russian Alliance of Patriots of Georgia (APG).

Inashvili argued that the Defense Minister had overseen the deployment of more than 500 additional soldiers to the polling station at the Mukhrovani military base to manipulate poll results. The Central Election Commission as well as the court turned down Inashvili’s complaints, whereas Georgia’s largest non-governmental election monitoring group, International Society for Fair Elections and Democracy (ISFED) did not question Khidasheli’s victory. In response, Inashvili engaged in a two-week hunger strike in front of the government headquarters, however failed to attract attention from the authorities.

On March 3, in the midst of the confrontation between RP and IP, the PO opened an investigation into Minister Khidasheli’s alleged abuse of power during the Sagarejo elections but declared on March 21 that it had found no evidence of wrongdoing.

Aside from election fraud, Topadze accused the Defence Minister of deceiving the Georgian people with statements about the country’s progress in its integration with NATO. He also urged resistance against the EU’s endeavor to “impose” laws related to the rights of LGBT persons, which he claimed contradict the will, culture and traditions of the Georgian people. RP termed Topadze’s rhetoric an anti-Western campaign directed not only against RP, but also against the interests of the coalition, the government and the country.

It should be noted that the attacks on OGFD and RP have coincided in time. Whereas this could well be a coincidence, the possibility also exists that it is not, especially in light of the parliamentary elections scheduled for October.

Both parties, along with GD itself, were founding members of the GD coalition. OGFD’s decision to leave the coalition in November 2014 raised expectations that RP would do the same, given the close ideological and interpersonal links between the two parties. Nevertheless, RP took advantage of the situation to increase its sway in the government. Despite the RP’s small number of seats in the legislative body, it managed to gain several ministerial portfolios, including the post of Defense Minister. RP’s increased clout has become an irritant to the rest of the coalition.

Some commentators speculate that Topadze’s feud with RP is backed by former PM and oligarch Bidzina Ivanishvili, aiming to curtail RP’s growing political ambitions. The rationale is allegedly to weaken OGFD in order to deny RP the alternative of leaving the GD coalition and enter a new one as cooperation with other political forces is vitally important for the small RP. This would also be a possible motive for the simultaneous attack on both two parties.

Indeed, divergence within the coalition on foreign policy priorities makes it harder for RP to retain its allegiance to GD and could force it to break ranks ahead of the 2016 parliamentary elections.

In late March, it was announced that  the RP would not run in an election bloc with the Georgian Dream Party in the upcoming elections, but would nevertheless remain in the coalition government until then.

More in this category: « Cease-fire restored after intense fighting around Nagorno-Karabakh Armenia's president visits Greece and Cyprus »
back to top