On December 18, the European Commission (EC) issued the “Fourth progress report on Georgia’s implementation of the action plan on visa liberalization” approving the country’s progress in fulfilling legislative and policy reforms, and meeting institutional and organizational principles and procedures in line with European and international standards.  The EC’s positive assessment entitles Georgia to visa-free travel with the Schengen area. However, the EC’ legislative proposal, slated to be submitted in early 2016, still needs to be approved by EU member states and the European Parliament. 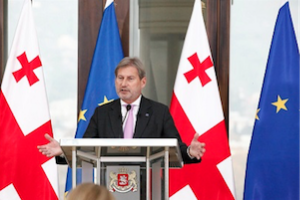 The process could be completed by mid-2016, and will allow holders of biometric passports to enter the Schengen area multiple times, without visa, for 90 days in any 180-day period. Currently, 776,000 Georgian citizens hold a biometric passport and this prospect will likely encourage a larger share of the population to obtain one.

The visa-free regime will include all EU member states except the United Kingdom and Ireland. It will also apply to Cyprus, Croatia, Romania and Bulgaria – which are not yet part of the Schengen zone; and to non-EU member states such as Iceland, Liechtenstein, Norway and Switzerland.

The EU-Georgia Visa Liberalization Dialogue was launched in June 2012, under Georgia’s previous government, and continued after the Georgian Dream (GD) coalition’s ascent to power. In 2013, the EC presented Georgian authorities with a visa liberalization action plan (VLAP) enclosing precise benchmarks outlined in four separate “blocks.” The VLAP envisaged two phases, starting with the adoption of a legislative, policy and institutional framework and continuing with ensuring its effective and sustainable implementation.

The appraisal of the implementation of all four blocks started in December 2014 and was completed in October 2015. It was headed by the EC, with participation of the EU Delegation to Georgia, experts from EU Member States and the European External Action Service (EEAS).

The Commission’s fourth report acknowledges that Georgia has allocated considerable financial and human resources to ensure the sustainability of its new achievements. It also appreciates the diligence through which the country has implemented the diverse reforms and terms the attained progress steady and effective.

The visa-free regime with the EU will have various political repercussions for Georgia. First, the “far-reaching and difficult reforms in the Justice and Home Affairs area” will advance the country’s institutional setup in terms of rule of law and democracy. It is indicative that despite the shift in government, integration with the Euro-Atlantic community has remained a top national priority, demonstrating Georgia’s consistent efforts and strong commitment to this objective.

Second, the achieved success could increase support for EU integration in Georgia and at the same time curb the recently emerging and growing Euro-skepticism in the country.

Although the signing of the Association Agreement had a remarkably positive impact in this regard, the visa-free regime could yield more tangible benefits and have a more direct effect on Georgia’s integration with the EU. The possibility of unrestricted travel throughout the Schengen area might encourage Abkhazians and Ossetians to obtain Georgian biometric passports, which could help facilitating the reintegration of the occupied regions.

For the same reason, the decision risks annoying the Kremlin, especially given Russia’s long-lasting efforts to secure visa liberalization with the EU and Brussels’ reluctance to grant it in light of the Ukraine crisis. Another irritating factor for Moscow is Georgia’s steady integration with European institutions to the detriment of Russia’s influence in its former periphery. On December 17, Russia’s President Vladimir Putin expressed readiness to lift visa requirements for Georgian citizens. “Despite all the difficulties … we see signals from the current leadership of Georgia and those signals are received,” Putin said. It should be noted that Moscow initially rebuffed canceling the visa regime until diplomatic relations between the two countries, severed after the August 2008 war, have been restored.

As shown by Gharibashvili’s stance, the ruling coalition seems keen to attract both pro-European and pro-Russian voters to improve its declining popularity ahead of the parliamentary elections scheduled for October 2016.

More in this category: « Draft PACE resolutions rock the Nagorno-Karabakh peace process Armenia's and Azerbaijan's presidents meet in Bern »
back to top