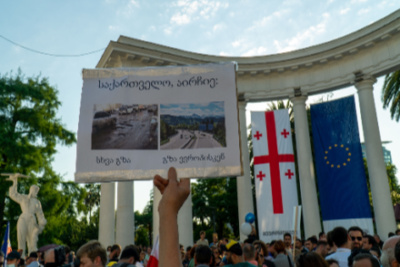 BACKGROUND: The Georgian government planned to apply for candidate status in 2024, however, Russia’s invasion of Ukraine in February 2022 changed the geopolitical realities of the post-Soviet space and the Black Sea Basin. This is particularly true for Georgia, which fought two wars with Russia after which parts of its territory remain under occupation. Yet the Georgian Dream (GD) government has taken a quite ambiguous stance towards the war in Ukraine. It did not join Western sanctions against Russia, which caused a wave of protests in Georgia. In an obvious move to placate public discontent, the authorities decided to apply for EU candidate country status ahead of schedule to reaffirm Georgia’s western orientation.

Government officials have also indicated that the decision stemmed from the geopolitical shift caused by the war in Ukraine, which encouraged the EU to accelerate the process of endorsing membership perspectives to the Associated Trio. There have indeed been signs that the EU also understands the urgency of the situation. The three EaP applicants were handed questionnaires that required less time and effort to prepare and there was a chance that they could get their candidate status as fast as four months after applying. Georgia, Moldova and Ukraine received the questionnaires in two batches. Georgia submitted the first questionnaire, which consisted of 369 questions, in April and the second containing around 2,000 questions in May. Georgia’s questionnaire consisted of one political and one economic part. The part about political criteria inquired into the state of democracy and rule of law in Georgia, and covered a broad range of questions including the constitutional system, functioning of the parliament, government and judiciary, as well as citizen and human rights. The economic criteria pertained to Georgia’s financial, labor and product markets as well as its banking sector and sought to assess whether the country’s economy will cope with the mechanisms and forces of the EU’s common market.

IMPLICATIONS: Although the Georgian government sought to utilize the geopolitical opportunity by applying for candidate status ahead of schedule, Georgia has worked towards closer cooperation with the EU for years. Georgia is part of the Eastern Partnership initiative and has signed and implemented an Association Agreement (AA) and a Deep and Comprehensive Free Trade Agreement (DCFTA) with the EU, which aimed to harmonize Georgia’s institutions and economy with EU rules. Starting from 2017, Georgian citizens are able to travel visa-free to the Schengen zone.

The latest report on implementation of the AA in Georgia, issued by the European Parliament in March 2022, points out that despite the challenging time of the COVID-19 pandemic, the country has so far been able to implement part of the AA, which encompasses about 70 percent of the EU acquis. On the other hand, the DCFTA did not live up to its promise. While Georgia’s exports to the EU have grown over the years, they constituted only around 17 percent of the country’s total exports in 2021. Moreover, the structure of Georgian exports to the EU, which are dominated by mineral products, benefit local companies that are in some instances owned by Russian oligarchs with links to the Georgian ruling elite, or benefit large international companies rather than small local producers.

Over the years, Georgia has not only worked towards harmonizing its political and economic system with EU rules, but also to a large extent eliminated petty corruption, improved governance, reformed the political and electoral system, and improved basic democratic freedoms such as free speech and free media.

Nevertheless, Georgia’s unquestionable accomplishments are fraught by deteriorating democratic credentials under Georgian Dream rule. In the past several years, the ruling party has been accused of democratic backsliding and fueling domestic polarization, as well as a lack of determination in pursuing Georgia’s European orientation. Georgian Dream has been criticized for informal concentration of power in the hands of one unelected politician – the billionaire, founder of the Georgian Dream party and former prime minister Bidzina Ivanishvili, who influences political and economic life in the country from behind the scenes. Another major problem is the profound polarization of Georgia’s political life, which is actively fueled by the ruling party, and has produced several serious crises including the recent conflict between the government and the opposition over the results of the 2020 parliamentary elections, which the opposition claims were fraudulent. Over the years, GD and Ivanishvili have also been criticized for using various methods of vote buying to influence the outcome of subsequent elections.

Other issues include persecution of opposition politicians, media and journalists critical of the government. A common violation is that courts often pass politically motivated judgements in cases involving opposition personalities. The lack of judicial independence and comprehensive judicial reform, as well as many malpractices in the judiciary system such as the non-transparent appointment of judges to the Supreme Court in 2021 is the most important source of Brussels’ discontent with Tbilisi. So far, the GD government has failed to implement necessary reforms in this area and even walked out of an EU and U.S.-brokered agreement with the opposition that envisaged electoral and judiciary reforms, resulting in the loss of a 75 million euro loan from the EU.

Serious irregularities in Georgian Dream’s rule, in contradiction of the EU’s fundamental values, eventually hampered Georgia’s efforts to move forward on its path to EU membership. In fact, over the last few years many international organizations and NGOs have concluded that the pace of democratic reforms in Georgia has stalled and the country is no longer a “frontrunner” among the EaP members, which it used to be. This has driven a wedge between Tbilisi and Brussels on many occasions. Weeks before the EU decision on whether to grant Georgia candidate status, on June 9 the European Parliament passed a resolution harshly criticizing the deteriorating media freedom in Georgia and called for personal sanctions on Ivanishvili over his alleged “personal and business” links to the Russian government. Earlier, the European Parliament had formally backed Ukraine’s and Moldova’s candidate status but did not do the same for Georgia.

The EU’s decision looks like a compromise since Brussels likely did not want to snub Georgia but rather push the ruling party to conduct serious reforms, and therefore offered Tbilisi a conditional perspective for candidate status. Georgia will be admitted as a formal candidate only after delivering the reforms outlined by the European Commission, which will monitor and assess their implementation. These reforms include reducing political polarization in the country, comprehensive judicial reforms, respecting fundamental rights, as well as anti-corruption and “deoligarchization” efforts. The latter became a source of dispute in Georgia and beyond since many observers suspected that “deoligarchization” is meant to target Ivanishvili, while Georgian PM Irakli Garibashvili argued that it refers to a few opposition figures and relatives of the former president Mikheil Saakashvili.

CONCLUSIONS: Even though the GD government seeks to frame the EU’s decision to defer from granting Georgia candidate status as its own achievement and an overall success, thousands of Georgians took to the streets of Tbilisi and other Georgian cities to protest and demonstrate the country’s unwavering commitment to the European course. Demonstrations were organized by the liberal group Shame Movement and backed by pro-democratic groups and other opposition groupings, which put the blame for Georgia’s failed EU bid squarely on the government and on Ivanishvili. While the GD government pledged to deliver the reforms necessary to qualify for candidate status, top officials from the ruling party soon returned to the practice of throwing harsh criticism and baseless accusations at political opponents. This does not bode well for the future since the government and the ruling party will have to change their modus operandi significantly in order to fulfill the EU’s requirements. This time, however, the authorities will face double pressure. President Salome Zurabishvili who has already criticized the government for squandering Georgia’s chance for EU candidacy and urged it to take the message from Western partners seriously. Pro-democracy groups who organized the recent pro-EU rallies also announced that they will form a movement to pressure the government to comply with EU demands.

More in this category: « Karabakh Armenians Threaten to "Join Russia" as Armenia Turns Toward Peace with Azerbaijan So-called parliamentary elections in occupied Abkhazia »
back to top