Kyrgyzstan is again in turmoil following the country’s parliamentary elections on October 4. The day after the election, thousands of demonstrators gathered in central Bishkek to protest the outcome of what opposition leaders described as the dirtiest in the country’s history, ending in a violent showdown between riot police and demonstrators. The fighting went on long into the night, until the protesters overrun the police and seized the presidential palace and the parliament. State power collapsed in the blink of an eye. Now begins the hard part of bringing back law and order and finding a viable path forward. The outcome is genuinely uncertain. There are no boundaries for what kind of interests that can lay claim on political authority. Old and new politicians, criminal groups and political activists all try to fill the power vacuum. 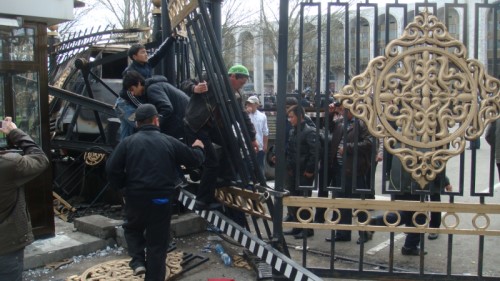 BACKGROUND: No less than sixteen political parties campaigned for election to the 120 seat-strong unicameral legislature – the Jogorku Kenesh. Most ran on an oppositional platform, criticizing the performance of President Sooronbai Jeenbekov and the government. But when the election results were announced on the evening on October 4, three of the four parties that had cleared the seven percent threshold were pro-government parties, leaving one-third of the voters without representation.

The two major pro-government parties, Birimdik (Unity) and Mekenim Kyrgyzstan (My Homeland Kyrgyzstan) obtained 75 percent of the seats. President Jeenbekov stood as the guardian of Birimdik, while Raiymbek Matraimov, a shadowy former top customs official wielding vast informal political and economic influence, bankrolled Mekenim Kyrgyzstan. The collective triumph of this unholy alliance of formal and informal power meant that the new parliament would be composed of presidential loyalists, shadow business figures and individuals believed to have connection to criminal groups. Furthermore, since both the Jeenbekov and the Matraimov families hail from southern Kyrgyzstan, this brought the ever present north-south regional divide into the fore.

Among opposition leaders and their supporters, initial despair turned to anger and resolve as evidence emerged of the extent to which the result had been affected by a combination of administrative resources, extensive vote-buying and intimidation. Thousands of people gathered for a protest rally in central Bishkek demanding the annulment of the vote and new elections. The peaceful rally soon gained the attention of growing police forces.

Things then escalated with lightning speed. Demonstrators battled police and security forces until they finally managed to overrun the police and storm the vacated headquarters of the president and parliament. Some protesters ransacked the abandoned presidential office; others set their sight on the State Committee for National Security, freeing several imprisoned high-profile figures, including ex-president Almazbek Atambayev. The overnight fighting left hundreds of people injured and one young man dead.

Over the next three days, there were few signs of stabilization. While the Central Election Commission responded to the developments by declaring the elections invalid, different parties, groups and self-appointed individuals laid rivaling claims on filling the power vacuum. For example, in opaque circumstances, the incumbent parliament elected Sadyr Japarov new prime minister, a remarkable turnaround for a person who just 24 hours earlier was serving a 11-year prison sentence for kidnapping the governor of the Issyk-Kul region during a protest back in 2013. At his disposal, he has a particularly aggressive group of street thugs. It remains to be seen how long his and his supporters’ antics will be tolerated in Bishkek. In parallel, there was a Coordination Council, led by veteran politician Adakhan Matumarov, comprised of representatives from several political parties. President Jeenbekov, still the legal head of state, remained at an undisclosed location inside the country, from where he claimed to be in control and working hard to stabilize the situation.

None of those power centers satisfied the motley collection of social forces that continued to occupy the streets of Bishkek. A particular source of discomfort were groups of young men roaming the streets hunting for properties and businesses to loot or attack. But their ability to create havoc has been effectively countered by voluntary guards, so-called druzhinniki, organizing to maintain law and order in the place of a demoralized police.

To add further tension, the notorious former Osh mayor Melis Myrzakmatov returned to the country after several years in exile in Turkey. Addressing his still loyal followers in Osh, he threw his support behind Jeenbekov, and vowed to defend the interests of the south against Bishkek. This seemingly confirmed the existence of a dangerous regional dimension to the current situation, which increases the risk of internal conflict.

IMPLICATIONS: Kyrgyzstan’s complex and fragmented political and social landscape means that the future is genuinely uncertain. But this is not the first time Kyrgyzstan goes through major political upheaval. The country experienced revolutions in 2005 and 2010, raising the question of how current developments compare to those of the past.

First, since independence Kyrgyzstan’s political trajectory has oscillated between semi-democracy and semi-authoritarianism, depending on the extent to which there has been an inclusive political representation of the country’s elite interests – or a concentration of power in the hands of small elite group. Whenever the latter dynamic has prevailed, political stability has been in peril. The temptation to narrow access to power and money, which are inseparable in Kyrgyzstan, emerged under first President Askar Akayev’s fifteen-year tenure, but accelerated under his successor Kurmanbek Bakiyev. It ultimately proved the undoing of them both.

After Bakiyev’s ouster in 2010, the new leaders tried to harness the temptation of power by enacting a new constitution that actually ensured the inclusion of most major political factions in the parliament. In that sense, the primary role of the parliament has not been its formal legislative duties, but rather its function as an arena for distributing rents and corrupt revenues as well as settling disputes among elites. This was always a brittle balance, and it finally collapsed with the October 4 election and the official usurpation of political power by the two major family networks associated with Jeenbekov and Matraimov respectively.

Second, in the 2005 Tulip Revolution, Akayev’s major political opponents organized protests around the country in response to a questionable parliamentary vote, and brought their supporters from the regions to Bishkek where local political forces joined in for the final round of protests. The process played out over several weeks, but ended quickly once it reached the capital as Akayev decided to flee the country. In 2010, the situation was somewhat different: opposition leaders rode the wave of a spontaneous uprising rather than controlling it. Even though Bakiyev applied massive violence in his attempt to put down the uprising, it turned out to be in vain.

Thus, the current turmoil resembles 2005 in the sense that protests emerged as a reaction to another highly controversial parliamentary vote. But the quick and violent unfolding of events have much more in common with 2010. However, this time the opposition leaders did not even ride the wave of the demonstrations. Indeed, as indicated by the slow response among the parties and their leaders during their immediate aftermath, no one really seemed willing to step forward and take command of the situation.

Sensing this void, organized crime and all sorts of known and unknown opportunists stepped forward to appoint themselves to posts at the central and municipal levels as well as taking control over state-owned companies and other valuable economic assets. Familiar old faces of discredited politicians associated with previous regimes have also resurfaced. Appearing fresh out of prison or from hiding abroad, they all seem unable to resist the temptation of having another go at power.

Finally, like before, the diverse Kyrgyz opposition has been unable to unite around political programs or visions for the country. In the end, the incumbent power provided the only common denominator against which to unite. When this was no longer the most pressing issue, the ability to act collectively quickly disappeared.

The most noteworthy difference compared to previous events is that this time around a gulf exist between political leaders and a young generation of protesters and activists. Their expectations are no longer aligned as they were in 2005 and 2010, when the bulk of the mobilized electorate was intimately connected to various leading political figures. This time, a young and politically aware urban generation is making up an independent force outside the traditional realm of patron-client relations. They demand a fresh start and the lustration of the old guard of politicians and officials.

CONCLUSIONS: As manifested in southern Kyrgyzstan in 2010, a spark can start a big fire. Each new upheaval carries the risk of setting dangerous processes in motion that may ultimately be very difficult to control, especially in an internally divided country like Kyrgyzstan. In particular, there is a real risk that escalation could take on a regional dimension pitting the south of the country against the north. While the north-south divide is sometimes played down, it continues to very much set the parameters for political competition in the country. Thus, this divide can always be manipulated by political forces.

Kyrgyzstan’s main problem has never been how to encourage political pluralism or fostering a diverse and dynamic civil society. It is the persistent failure of building responsive state institutions capable of providing the most elementary public goods. Unless the state supplies those goods, there will always be a demand for alternative suppliers, including local strongmen like Matraimov. Likewise, without reasonably functioning state institutions in place, viable and meaningful democratic institutions will remain a utopia.

This does not imply that the there is no Kyrgyz state: only that it is designed and organized for officials and politicians to control what should be public goods and services. They then treat them as private goods that they can informally sell, including the supply of protection and the granting of business rights. In this system, understanding corruption in the conventional sense as referring to violations or deviations from norms and rules is a misnomer, for corruption is the rule of the game.

Consequently, like an invisible hand, the political system of the past two decades attracts all the wrong people for all the wrong reasons. Thus, the very idea of what it means to be a politician or public official needs to change. This requires rethinking or reviewing some of the basic fundaments of Kyrgyzstan’s political system. For instance, it may be worth considering whether the country would not be better off without a presidency altogether.

AUTHOR'S BIO: Johan Engvall, Ph.D., is a researcher at the Swedish Defence Research Agency (FOI), and a non-resident senior fellow with the Central-Asia Caucasus Institute – Silk Road Studies Program. He is the author of the book The State as Investment Market: Kyrgyzstan in Comparative Perspective, published by University of Pittsburgh Press.

More in this category: « Re-opening Abkhazia's Border with Russia: Economic Opportunity or Epidemiological Risk? Fighting in Nagorno-Karabakh Rages Despite Ceasefires »
back to top