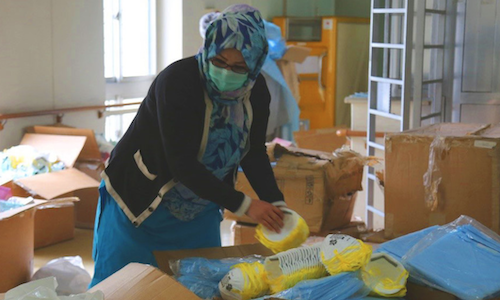 BACKGROUND: Since February 24, when Afghanistan reported its first confirmed case of Covid-19, the number of Afghans who have tested positive for the coronavirus has increased. According to the Ministry of Public Health, as on May25, 11,173 people have tested positive for Covid-19, 219 have died of the disease and 1097 have recovered. Kabul province has reported the highest number of Covid-19 cases (4,174) so far, followed by Herat with 1,773 cases and Balkh with 798. Although the number of confirmed cases and fatalities in Afghanistan is smaller when compared to figures from other countries in the region and far more economically developed countries in the world, the magnitude of Afghanistan’s Covid-19 crisis could be greater than what the figures reveal. Many infections are likely to have been undetected due to lack of testing.  The virus could be spreading silently through Afghanistan and the coming weeks and months could see a spurt in infections and fatalities.

Afghanistan’s capacity to fight the coronavirus crisis is limited. Not only is it among the poorest countries in the world but also it has suffered the ravages of civil war and foreign occupations for over four decades. Its health infrastructure has always been fragile and ill-prepared to meet the needs of its 35-million strong population. This shortage of facilities is being felt all the more now. An acute shortage of testing kits, medicines and personal protection equipment (PPE) is crippling Afghanistan’s capacity to fight Covid-19.

Afghanistan lost around three months in its fight against the Covid-19 pandemic on account of the bickering between its President Ashraf Ghani and his defeated rival Abdullah Abdullah. The two have been at loggerheads over a disputed presidential election. At a time when the government should have been focusing all its energies on fighting the pandemic, the Ghani-Abdullah squabbling undermined governance and public confidence in the government’s commitment to dealing with challenges confronting the masses. This obstacle in the way of tackling the pandemic has been removed now with the two leaders finally striking a power-sharing deal.

The continuing war in Afghanistan is further crippling the government’s capacity to fight the coronavirus. With the Taliban and the Islamic State continuing to attack civilians and Afghan security forces, the government’s outreach to insurgent-controlled areas for testing and treatment is severely restricted. Additionally, the government needs the support of security forces to enforce lockdowns and transport essential commodities but it cannot re-deploy them for counter-coronavirus operations when insurgent attacks continue to escalate. While the war in Afghanistan is undermining the country’s capacity to fight Covid-19, the pandemic could impact the conflict and the peace process in various ways.

IMPLICATIONS: The Covid-19 outbreak in Afghanistan has happened at a critical period in Afghanistan’s contemporary history. On February 29, the United States and the Taliban signed an agreement under which American troops committed to withdrawing from Afghanistan in 14 months and the Taliban agreed to stop allowing terror groups that pose a security threat to the U.S. and its allies to function on Afghan soil. The deal also provided for intra-Afghan talks towards a settlement of the conflict. Several deadlines laid out in the deal have already been missed and more could follow. For instance, the U.S. is to pull out 5,400 troops from Afghanistan within 135 days of signing the agreement. It could miss this deadline due to concerns over quarantining of its soldiers.  But there is a possibility too of the pandemic accelerating this pullout, especially if Covid-19 extracts heavy costs from American troops in Afghanistan.

How the intra-Afghan talks will be conducted could also be impacted by Covid-19. Face-to-face talks between negotiating teams and robust participation of facilitators will not be possible. A sustainable peace requires community consultation and participation. That will not be feasible either, which means that the process will remain confined to the elite level.

The Taliban’s response to the pandemic has changed in recent weeks. In early March, its spokesperson Zabiullah Mujahid described the virus as a “decree of Allah” that was sent to punish the “disobedience and sins of mankind.” It then shifted its stance and promised to allow safe passage for health workers in areas under its control.

The Afghan government has called for a nation-wide ceasefire with the Taliban in order to ensure that Afghans across the country can be reached by health workers. The Taliban initially rejected this call. But coinciding with the Eid-al-Fitr holiday, the Taliban unilaterally declared a three-day ceasefire. The Government reciprocated by announcing its intention to release up to 2,000 Taliban prisoners.

In the longer term, this does not guarantee the Taliban’s willingness to accept a longer truce. Its fortunes are rising. It controls more territory than it ever has since 2001, though not in heavily populated areas. It has managed to wrest an agreement that concedes its demand for withdrawal of U.S. troops from Afghanistan and more. It is eyeing power in Kabul which increasingly seems within its reach. It may not be willing to give up its position of advantage for the well-being of the people, which has never been a priority for the insurgent group.

On the other hand, natural disasters and crises are known to have triggered peace processes, as in Aceh in Indonesia after the 2004 Indian Ocean tsunami disaster. The coronavirus crisis has the potential to bring the main conflict actors in Afghanistan to work together to provide medical relief to the Afghan masses. This could serve as a major confidence building measure between the government and the Taliban. The Taliban stands to benefit too. It could provide the group with a much-needed image makeover.  It would be able to project itself as a responsible group that is capable of providing good governance at least in times of crisis. Peace process facilitators should work on getting the two sides to co-operate in ensuring that medical treatment for coronavirus reaches Afghans across the country. An opportunity has opened up. Will the Afghan government, the Taliban and the international community grab it?

CONCLUSIONS: The Covid-19 pandemic has struck Afghanistan at a time of serious political instability and grave uncertainty over the fate of a U.S.-Taliban peace deal. While the country’s capacity to cope with the pandemic is low and provides little reason for optimism, windows of opportunity to reduce public suffering have opened up. The pandemic provides an opportunity for the Afghan government and the Taliban to work together to improve access of Afghans to treatment for Covid-19. Such collaboration has the potential of providing a foundation for future co-operation at the talks table and beyond.  While the opportunity for confidence building exists, the Taliban may not be willing to give up the advantages it holds on the battlefield at this point. The Covid-19 pandemic could end up being another wasted opportunity for hammering out peace, if not a cessation of violence in Afghanistan.

Dr. Sudha Ramachandran is an independent researcher and journalist based in India. She writes on South Asian political and security issues. Her articles have been published in Asia Times Online, The Diplomat, China Brief, Asian Affairs, etc. She can be contacted at   This email address is being protected from spambots. You need JavaScript enabled to view it. .

More in this category: « The Eurasian Union Flunks Its Stress Test U.S. Presence in Central Asia: Realities and Perspectives »
back to top