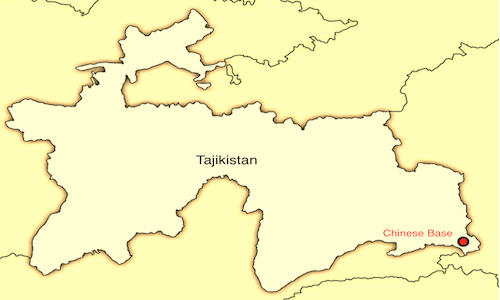 BACKGROUND: Located 12-14 kilometers from the Tajik-Afghan border and 30 kilometers from the Tajik-China border in Gorno-Badakhshan province, the Chinese base overlooks a crucial entry point from China into Central Asia. It is also close to the vital Wakhan corridor in Afghanistan, which is a key way station for China’s Belt and Road Initiative (BRI). Satellite reconnaissance shows the presence of heliports and the base’s suitability for an approximately battalion-sized force supported by armored vehicles, in other words, light infantry. These facts, in and of themselves, highlight the nexus between the BRI program and its strategic political implications along with its more obvious economic objectives.

Chinese military cooperation with Afghanistan and Central Asia dates back to 2016 and the base in Tajikistan as well as the likely second base in Afghanistan proper probably originate in 2016-17 if not earlier. Indeed, in 2016 China formed the Quadrilateral Cooperation and Coordination Mechanism with Tajikistan, Pakistan, and Afghanistan as a vehicle for intelligence sharing and counter-terrorism and in fact, the Pentagon predicts a Chinese base also in Pakistan. Evidently, the QCCM had other, less overt, objectives from Beijing’s standpoint. Neither is this the first sign of China’s ability to encroach on Tajikistan’s sovereignty as earlier “territorial rectifications” occurred because Tajikistan essentially could not pay its debts.

These bases also reflect China’s non-military objectives and its threat assessment. As China is pouring billions into Central Asia as part of the BRI, a desire to guard its investment naturally gains more prominence in policymaking, especially as Beijing has long held that economic development in Xinjiang and Central Asia is the answer to the threat of Islamic self-assertion or Uyghur ethno-national mobilization (for Beijing, these in practice amount to the same thing). China’s concurrent Orwellian crackdown on Islam and the Uyghurs in Xinjiang and even upon Kyrgyz and Kazakh nationals apparently aims to eradicate their Islamic identity, using techniques first honed in Stalin’s Gulag, Mao’s Cultural Revolution and Communist China’s long-standing Laogai system of concentration camps for political dissenters. This campaign has grown along with China’s interest in projecting military power into Central Asia. Thus economic, political, and ethnic considerations have become inextricable from the impetus to build military bases, especially as Islamist terrorism continues to flourish in Pakistan and Afghanistan.

The growing likelihood of a U.S. withdrawal from Afghanistan has also probably influenced Chinese thinking, encouraging efforts to take advantage of perceived U.S. weakness and to assert its own prerogatives and protect its investments. It should also be noted that these developments beginning in 2016-17 also correspond to the increasingly aggressive and assertive tenor of China’s overall foreign policy since then, not just its Central Asian policies. Similar efforts are underway to project power into the South China Sea and Africa, and a growing political, if not strategic interest in the Arctic. So while China may deny the existence of its bases in Central Asia, in fact, the existence of such facilities comports quite well with the overall character of contemporary Chinese security policy. Thus the base in Tajikistan, whether it is singular or part of a network of facilities embodying a Chinese security presence and cooperation across Central and South Asia, clearly betokens the announcement of China as a great power determined to assert itself wherever it has major interests at stake. Where China’s “core interests” are at risk, such behavior is increasingly more likely to occur in the future.

IMPLICATIONS: The discovery of the Tajik base is no secret to Russia. In 2017 a Chinese think tank, the Development Research Center, invited a handful of Russian researchers to its Beijing office. In a private seminar, Chinese officials explained why China had a security presence in Tajikistan that extended into Afghanistan’s Wakhan corridor, taking pains to describe this outpost as built for training and logistical purposes, not a military occupation. They also sought to gauge Russia’s reaction by inquiring how Moscow would view China’s move into a traditional Russian sphere of influence and whether it would be more palatable if China deployed mercenaries rather than uniformed soldiers. As Alexander Gabuev said “they didn’t want Russia blindsided.”

In other words, despite much Western writing arguing that China and Russia already have visible conflicts that will undermine their overall alliance, Chinese diplomats, quite unlike U.S. officials, have taken exquisite care to reassure Moscow of their peaceful and benevolent intentions. Despite undeniable frictions, mainly in economics, this alliance is therefore unlikely to disintegrate anytime soon. Indeed, given the strength of Russo-Chinese cooperation in other spheres and the strong network of inter-governmental coordination, it is likely to grow stronger, especially as Moscow’s dependence on China grows.

Nevertheless, in the longer term Chinese objectives apparently envision supplanting Russia in Central Asia and that may well entail the construction of a network of such bases if necessary. As one Chinese diplomat told Nadege Rolland of the National Bureau of Asian Research, Eurasia is the main region where China must work hand in hand with Russia to seek “convergence and a balance of interests” and align both countries’ Eurasian grand strategies. However, the unspoken commentary is that China will accommodate Moscow’s fears and apprehensions for an undefined transitional phase while China bides its time, after which Russia will become a “toothless former superpower.” It will then yield the stage to China to fully assert its primacy over Eurasia.

Thus, the current base or possibly bases are unlikely to remain the only ones, especially in view of Beijing’s paranoia about its own Muslims and its growing investment exposure to Central and South Asia. Considering the likelihood of long-term instability across this region, the need for some form of forceful “imperial policing” may well come to dominate Chinese perspectives on regional security. Whether this leads to conflict with Moscow or not, such considerations will undoubtedly place the current alliance under considerably more strain than is now the case.

At the same time, the U.S. is increasingly opposing China’s BRI and other expressions of Chinese ambitions across the globe, though particularly in Asia. The Trump Administration has undertaken several modest but positive steps to enhance economic, political and security cooperation with Uzbekistan and Kazakhstan in particular and is unlikely to regard Chinese policies in Central Asia as benign. If China proceeds to build a network of bases or military installations in Central Asia, this could possibly induce Washington to invigorate its own regional policies with a decidedly anti-Chinese stance. Quite possibly, Washington will also seek to persuade Japan, along with South Korea, the EU, and certainly India to step up their opposition to the BRI and enhance their presence in Central Asia.

It is also entirely possible that despite the great attractiveness of Chinese economic power, the presence of military installations may trigger further outbreaks of the already noticeable anti-Chinese and even xenophobic feelings prevalent across Central Asia. If domestic pressure grows on the Central Asian states or in case of leadership changes, as currently in Kazakhstan, domestic considerations might compel these governments to take a much more oppositionist stance to China’s repression of Uyghurs. The Kazakh and Kyrgyz governments are already increasingly caught between mounting domestic and increasing Chinese pressure on this issue, with domestic forces advocating protests and China demanding acquiescence.

CONCLUSIONS: The presence of military bases in a foreign country inevitably transforms the strategic and geopolitical situation in that country. Tajikistan could come under ever greater Chinese pressure to yield more and more of its territory or de facto sovereignty to China, not unlike what is now occurring in the South China Sea. Other states in Central and South Asia may face a similar situation whether through excessive debt of the need to rely on China for protection. We cannot predict the outcome of these trends, since the existence of the base in Tajikistan has just been confirmed and the situation around the probable Afghan base remains unclear. However, these reports mark a definite trend whose consequences and implications carry portentous possibilities for Central Asia, South Asia, and regions far beyond those two troubled zones.

More in this category: « Protest Against Chinese Migrants in Kyrgyzstan: Sinophobia or Demands for Social Justice? Central Asian Salafi-Jihadi and Al Qaeda: From Bayat to Global Jihad »
back to top