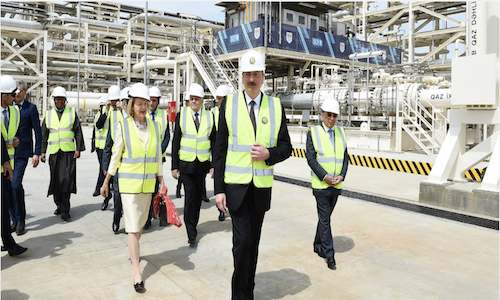 BACKGROUND: A decade ago, the European Commission issued its Energy and Solidarity Action Plan, which set a clear target to help Eastern European countries boost and diversify their gas imports. The Southern Gas Corridor project is the backbone of this strategy to decrease Europe’s dependency on gas imports from Russia substantially. This has been a growing concern for policymakers ever since a conflict between Gazprom and the Ukrainian government interrupted supplies in the winter of 2006.

The SGC will transport 6 bcm of natural gas annually via Turkey to Europe and the volume will increase up to 10 bcm after 2020. If additional gas compressor stations are constructed, the volume could increase up to 31 bcm after 2026. For this purpose, the European Bank for Reconstruction and Development has approved three loans for the Shah Deniz 2 gas field, of US$ 200, 250 and 100 million in 2014, 2015 and 2017 respectively, whereas the Asian Development Bank (ADB) approved an additional US$ 1 billion for the development of the field in 2016.

Representatives from the UK, the U.S, the EU and ADB attended the opening ceremony, testifying to the geostrategic importance of the SGC project. The project currently involves seven countries; however, Baku soon hopes to attract new stakeholders from the Balkans including Croatia, Bosnia and Montenegro. The SGC project will ensure European energy security and simultaneously increase the concurrency over local energy markets. Several European companies like Shell, Bulgargaz, DEPA, Uniper, Engie, Hera Trading, Edison & Enel, and AXPO have agreed to purchase natural gas from SGC. By joining the Southern Gas Corridor project, these companies seek to diversify their investment portfolios and decrease their dependence on monopolized prices, in particular stemming from Russian hegemony on the market.

IMPLICATIONS: SGC is strategically important for the EU. Unlike other energy projects and contrary to common regulations, the European Commission has granted Azerbaijan’s state oil company (SOCAR) the exceptional right to fill the SGC pipeline exclusively with its own natural gas. By introducing a rival and alternative gas supply source from the Caspian, the EU hopes to erode Gazprom’s ability to dictate prices.

The inauguration of SGC’s first phase presents a challenge to Russian energy exports to Turkey and Italy, and to Europe as a whole. Although the volumes of natural gas transported to Turkey (6 bcm) and Europe (10 bcm) are not enormous, they will definitely make Azerbaijan not only an important gas exporting country but also an important transit country en-route to Turkey and Europe. The new pipeline is technically capable of transporting up to 31 bcm, which should enable Azerbaijan to attract additional gas from other countries.

Russia currently supplies Turkey with natural gas through the Blue Stream pipeline and the Trans-Balkan corridor. Turkey is the second largest customer of Russian gas, importing 29 bcm in 2017. Gazprom is currently building a new gas pipeline – Turkish Stream –consisting of two main branches. One of them aims to transport natural gas directly to Turkey; the other will target Southern European countries. Gazprom currently seeks a suitable route for its natural gas via Turkey to Greece, Italy and Bulgaria, with further extension to Serbia, Hungary and Austria.

It is safe to note that the very large European gas market has room for several suppliers. Europe’s high demand for natural gas will likely remain in the next several decades and the need for gas import will increase steadily. Thus, Azerbaijani gas will likely not be sufficient for the second phase of TAP, and its scalability to 20 bcm/y will require natural gas from other sources as well.

According to statistics recently provided by Gazprom, the demand for natural gas in Europe will increase up to 546 bcm in 2035. The high demand for natural gas and the problematic relations between Russia and the EU have prompted Azerbaijan to increase its production target of natural gas from the Shah Deniz 2 field and to seek participation of other countries, including Iran and Turkmenistan, in the SGC. Both countries have vast natural gas reserves. According to Aliyev, “Azerbaijan is ready to use the Southern Gas Corridor project in order to transport natural gas from Iran, Israel and Cyprus.”

Iran’s involvement in SGC would not challenge Gazprom’s hegemony in Europe, whereas the appearance of Turkmen natural gas would be a game changer. Turkmenistan’s only obstacle to joining the SGC is the unresolved status of the Caspian Sea. Yet all littoral states will reportedly sign a new agreement on the legal status of Caspian Sea, enabling each country to make decisions on pipeline projects in their territorial waters. This will improve Turkmenistan’s chances of utilizing the SGC for westward export of its gas.

Despite the rationale behind the SGC project, there is still a possibility that Russian gas could find its way into the pipeline, since the Russian company LukOil is also stakeholder in the project. Moreover, Italy’s Snam Company – a TAP stakeholder – has reportedly offered Russian companies (mainly Gazprom) to use the pipeline for gas deliveries to Europe. Thus, Russia’s shadow still hangs over the SGC project, and substantial Russian participation would undermine its geostrategic importance.

The inauguration of the SGC implies a number of additional benefits for Azerbaijan, aside from financial gains. It is part of Baku’s tailored strategy to become the main regional gas supplier and transit country from East to West, amid ongoing instability in the world energy market. According to Khoshbakht Yusifzadeh, First Vice President of SOCAR, “Besides Azerbaijan, several countries will benefit from the Southern Gas Corridor Project.” Indeed, Azerbaijani gas alone will hardly present a challenge to Gazprom’s position, as the difference in the gas volumes offered by SOCAR and Gazprom is enormous. Azerbaijan therefore focuses on convincing more regional countries to join the TANAP-TAP system with Europe’s blessing.

CONCLUSIONS: The EU will continue to rely on energy imports, not least of natural gas, making the realization of the SGC strategic imperative for the union. Whereas the EU’s investment in the development of renewable energy could reduce its dependence on this commodity, the union will hardly achieve this objective in the foreseeable future. Baku, for its part, avoids “anti-Russian” rhetoric in relation to the SGC, instead claiming that the pipeline should not be regarded as a competitor to Gazprom. This is true to the extent that without participation of Turkmenistan and Iran, the SGC pipeline will hardly be a real challenger to Gazprom in the European gas market.

More in this category: « Afghanistan-Iran Trade Corridors to Bear Fruit for Both India and China Azerbaijan's Advances Around Nakhichevan »
back to top