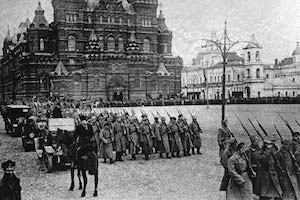 BACKGROUND: A common historical narrative is the product of a common socio-political foundation. Yet, the narrative does not necessarily die immediately after its foundation ceases to exist. While the USSR disappeared more than a generation ago, the memory of common historical experiences during the Soviet era has lived on and taken on new features. Eurasianism is a prominent example of this. The major tenet of Eurasianism is that most peoples of the tsarist empire and later the USSR lived in a condition of “symbiosis,” or represented one quasi-nation. Even a cursory view of Eurasianism indicates that it constitutes a peculiar transmogrification of Soviet ideology. The popularity of Eurasianism in the 1990s and fresh memories of the Soviet experience indicated both nostalgia for the USSR and vague dreams about its possible resurrection in some form. However, by the centennial of the Bolshevik Revolution in 2017, both the Soviet experience and Eurasianism have faded in public consciousness.

The disintegration of the imperial Russian and related Soviet legacy is clearly visible in the Central Asian states, which either marginalize or ignore Russian and Soviet history, or consider it a dark part of the nations’ past. The marginalization of the Soviet/Eurasian experience is apparent even in Kazakhstan, where the elite has preserved at least some elements of the Soviet legacy and related images from the pre-revolutionary past. Uzbekistan, Tajikistan and Turkmenistan have almost completely sought to erase their history as subjects of the Russian and Soviet empires.

The declining interest in the Soviet/Russian legacy is a function of Russia’s comparatively weak role in the region as well as new geopolitical realities. First, it indicates the final and irreversible disintegration of the post-Soviet space – not just in terms of the disappearance or reinterpretation of the common socio-political framework. It also represents the death of common cultural and historical images that survived the death of the state for decades.

Second, it indicates the complexity of the new Central Asian reality. Some countries, most prominently Kazakhstan, still attach significant importance to their relationships with Russia. Thus, Kazakh historians spend considerable energy on assuring their readers that Kazakhstan was as great as Russia in the distant past, and actually was one of the centers of world civilization. For Tajikistan and Uzbekistan, the relationship with Russia has lost its centrality. Consequently, their historians have engaged in polemic debates with each other, emphasizing their respective nation’s superiority in every possible way. Their historical narratives have become chaotic, relating to Central Asia’s geopolitical fragmentation. By extension, this opens space for the emergence of a new, unifying narrative built around the rising China.

IMPLICATIONS: The collapse of the existing geopolitical and historical space prepared Central Asian states for the acceptance of a different grand metahistorical framework. The most obvious candidates are the Turkic and Iranian historical narratives, although these coexist with purely self-centered notions of history.

The Turkic narrative has become highly popular in Kazakhstan. Kazakh historians have searched for the roots of Kazakh statehood and even ethnicity among the Bronze Age population on the territory of present-day Kazakhstan almost 4,000 years ago. Yet the main thrust of this narrative is the arrival of Turkic people. The great empire of Genghis Khan is considered as Turkic and in Kazakh popular lore, Genghis Khan has become not just a man of Turkic origin but Kazakh. Consequently, the Kazakh state, which according to official history emerged in the 15th century, descended from the Mongol or actually the Turkic empire, and dealt with the emerging Russian state as an equal until the 18th century. This Turkization of Kazakhstan’s historical narrative provided the ideological framework for Kazakhstan’s “multi-vectorism.”

Tajikistan has respectively seen the increasing popularity of an Iranian narrative, according to which Tajiks are direct descendants of Indo-European Aryans who dominated Central Asia and beyond from the Bronze Age. They created a sophisticated culture and are in this narrative implicitly seen as not only culturally but also racially superior to Turkic peoples, especially Uzbeks.

Uzbekistan, in turn, has also downplayed the significance of Soviet experiences and Russia’s presence in the area, and its historical narrative has evolved in opposition to that of the neighboring Tajiks. Yet Uzbekistan has promoted a mix of the Turkic and Iranian narratives, motivated by two key interpretations of Uzbek ethnicity. In accordance with the first, Uzbeks trace their ancestry to both indigenous Indo-Europeans and equally indigenous Turkic peoples. Second, they consider Indo-European Aryans to constitute a social group rather than a particular ethnicity. In this interpretation, Turkic peoples are indigenous to Central Asia since the Bronze Age. At the same time, this narrative depicts Tajiks as newcomers that emerged in Central Asia comparatively recently. Undergirding this representation of Uzbeks as indigenous to Central Asia is the portrayal of Timur as a great conqueror who incorporated the entirety of Central Asia into his huge empire. Timur has become Uzbek in this narrative.

In contrast to Kazakhstan, the Tajik and Uzbek narratives are less concerned with Russia than with their territorial claims on each other and control over water resources. Indeed, this preoccupation has been a key driver in the effort to identify indigenous people in the region and their historical roots.

As the notion of a common past is declining, indicated by both Russia’s diminished role and the Central Asian states’ increasing attention to regional affairs, the emerging historical and geopolitical narrative has opened for an increased role of China as a rising hegemon in Central Asia. While rebuilding the Silk Road, intended to ensure China’s future domination in Eurasia, China has also undergone an official reconstruction of the country’s past. Reflecting China’s increasing power and ambition, its historical narrative increasingly stresses its expansion and interaction with the global community. The very notion of the Silk Road implies not just Chinese ambitions, but also the nature of the encounter. China’s relations with the world have not been defined predominantly by conflict, which demanded the building of the Great Wall, but more importantly by the peaceful exchange of goods and ideas, in which China played the role of a benevolent economic and cultural Kulturträger.

China’s official ideology increasingly emphasizes Chinese integration with the broader Eurasia. At the same time, these notions have not yet obtained prominence in the thinking and historical narratives of Central Asian elites.

While potentially a powerful trend, Chinese Eurasianism is just in the making. Yet, with China’s increasing influence in the region, such a narrative is likely to emerge in the future. In this case, it could be similar to Soviet or Russian Eurasianism, however, placing the region’s geopolitical and historical center in Beijing rather than Moscow.

CONCLUSIONS: The Kremlin’s disregard for the centennial of the Bolshevik Revolution and the marginalization of Soviet history goes along with a similar process in Central Asia. This disintegration of historical space has profound implications, even as Russia and some Central Asian states engage in closer cooperation within the frameworks of the Eurasian Economic Union or the Collective Security Treaty Organization. For Kazakhstan, participation in these arrangements appear to be purely pragmatic whereas it reemphasizes the distance from Russia by constructing a Kazakh historical narrative to this effect.

For Tajikistan and Uzbekistan, Russia has become marginal or almost irrelevant judging by their historical narratives, which focus largely on neighborly rivalries. This disintegration of historical space and is chaotic conditions create a peculiar discursive and related geopolitical vacuum, which China will most likely fill. China is in the process of rediscovering its “Eurasian past” as an ideological framework for the country’s Eurasian expansion. While structurally similar to Russian Eurasianism, it will relocate the center of the Eurasian universe to Beijing.

More in this category: « Is Russia's Soft Power Influence Effective? The Case of Azerbaijan The Tashkent Conference on Afghanistan: Too Much Diplomacy, Too Little Solution »
back to top