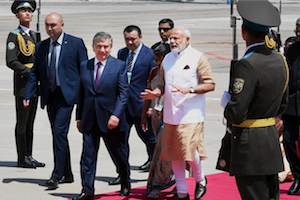 Since then two more wars, a number of armed conflicts, skirmishes, incidents and even a nuclear arms race have taken place between these two states. India and Pakistan met once again in Tashkent in June 2016, this time within a multilateral format to engage with the Shanghai Cooperation Organization (SCO) – the structure that for 15 years has been declaring values of peace, cooperation, mutual trust and so on, all sealed in the SCO Charter.

To some extent, the role of the joint Indian-Pakistani body mentioned in the above mentioned Article IX will be transferred to the SCO. However, the last two SCO summits (in Ufa and Tashkent) revealed more concerns than optimism regarding the new mission of the organization, burdened with ever more geopolitical tasks than before the expansion. This is exactly what Uzbekistan’s President Islam Karimov has repeatedly pointed out between the previous summit and the recent one.

IMPLICATIONS: In his speech at the SCO summit, Karimov mentioned the precipitously changing world and indicated three highly important challenges facing the organization. First, it is important to preserve the SCO’s openness and its character as a non-alliance. Thereby, he hinted to Tashkent’s wish to have free hands and pursue a relatively independent foreign policy.

Second, the course towards a large expansion of the SCO’s composition launched with the admission of India and Pakistan undoubtedly means that the SCO reached a new level and entered a new and more complicated phase of its activity. He pointed out that the SCO will from now on face more difficulties in achieving consensus during decision making on basic issues on the organization’s agenda, taking into account the sometimes diametrically opposite approaches of some states towards current international and regional developments.

Third, with the current protracted situation in Afghanistan, there is a serious and real danger that instability can spill over to neighboring countries and regions. Karimov repeated his old vision of peacemaking in Afghanistan: peaceful political negotiations between major belligerent groups under the UN aegis, including a revitalization of the negotiation process between the government and the Taliban, without preliminary conditions. Although the last point seems unrealistic and conceptually invalid, the message was addressed to the SCO’s expanded family. It sounded like a stipulation of Uzbekistan’s consent on the admission of India and Pakistan, with assurance that peace and stability in Afghanistan must be achieved.

From now on, given the institutionalized summits of the SCO, India’s and Pakistan’s leaders will meet annually, not occasionally, which hopefully will contribute to a broader climate of mutual confidence between these two permanent rivals. Particularly Pakistan, where terrorist and extremist groups find sanctuary and regularly destabilize Afghanistan, will have to take stricter and more rigorous measures against them. If such a new trend would contribute to stable peace and the defeat of terrorism in Afghanistan, this would be the SCO’s greatest achievement, with profound implications for Central Asia.

Meanwhile, the SCO’s compositional innovation related to the admission of India and Pakistan contrasts the old tradition of what can be called “cloning twin declarations.” Especially if the SCO’s previous 2015 Ufa Declaration is compared to the latest Tashkent Declaration of 2016, they indeed look like identical statements. Probably no other international organization, except the UN, has been as anxious to make common, axiomatic expressions of positions about the wide range of major problems the world is facing nowadays – from fighting terrorism and drug traffic to the situation in the Middle East and Ukraine, from nuclear non-proliferation to the role of the UN, from information security to the militarization of space, from the world financial crisis to anti-missile defense systems.

Why is SCO cloning its declarations? This is likely a manifestation of the SCO’s China-centrism. The more concerns that are expressed in different parts of the world and different mass media about a rising China, the more persistently the SCO reiterates its good will and cooperative agenda even in identical expressions. It is noticeable, in this regard, that both the Ufa and Tashkent Declarations display member-states’ support of the Chinese “Silk Road Economic Belt” initiative. However, having embraced numerous key international issues, neither the Tashkent, nor the Ufa Declaration mentioned the ambitious Eurasian Union, initiated by Russia. Although the China-centric character of the SCO has been fairly clear in light of its hitherto limited membership, it is an open question whether this character will be sustainable after the organization’s expansion, which therefore constitutes a challenge both for China and for the SCO itself.

CONCLUSIONS: The SCO’s latest main document is named the “Tashkent Declaration of the 15th Anniversary of SCO.” This year is also symbolically important as the 50th Anniversary of another Tashkent Declaration adopted in the wake of the war between India and Pakistan. But if 50 years ago the summit yielded great optimism and positive expectations, the SCO’s 15th anniversary yielded less optimism and more concerns, particularly expressed by Uzbekistan.

Until recently, the SCO has focused primarily on Central Asia. In connection with the SCO’s expansion, the question arises why so many countries from Turkey and the Caucasus to Sri Lanka and East Asia has begun to gravitate towards the SCO? Is this organization replicating the Conference on Interaction and Confidence Measures in Asia (CICMA)? Will it resemble an Eastern OSCE? Or are Eurasian, Central Asian, South Asian and East Asian countries just pivoting towards a rising China?

In connection with the SCO expansion, the political unity of Central Asians themselves is more actualized than ever before, as they become exposed to more geopolitical challenges and subjected to diverse influences in a highly complex structure that is becoming more multilateral and more ambitious.

More in this category: « Russia and Turkey come back to the gas table Afghanistan risks water conflict with Iran »
back to top