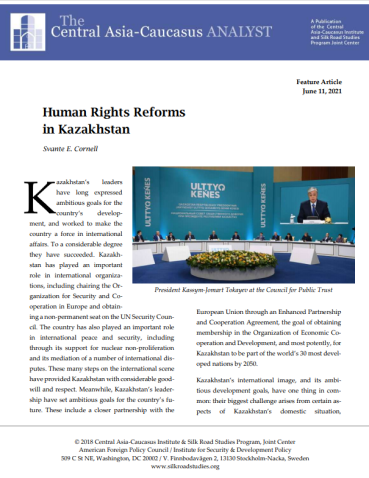 goals for the country’s development, and worked to make the country a force in international affairs. To a considerable degree they have succeeded. Kazakhstan has played an important role in international organizations, including chairing the Organization for Security and Cooperation in Europe and obtaining a non-permanent seat on the UN Security Council. The country has also played an important role in international peace and security, including through its support for nuclear non-proliferation and its mediation of a number of international disputes. These many steps on the international scene have provided Kazakhstan with considerable goodwill and respect. Meanwhile, Kazakhstan’s leadership have set ambitious goals for the country’s future. These include a closer partnership with the European Union through an Enhanced Partnership and Cooperation Agreement, the goal of obtaining membership in the Organization of Economic Cooperation and Development, and most potently, for Kazakhstan to be part of the world’s 30 most developed nations by 2050.

Kazakhstan’s international image, and its ambitious development goals, have one thing in common: their biggest challenge arises from certain aspects of Kazakhstan’s domestic situation, particularly those relating to individual rights and freedoms. As became clear during Kazakhstan’s candidacy for the OSCE chairmanship, international concerns regarding individual rights and freedoms in the country constituted a significant challenge that led to reservations from influential member countries and, fairly or not, delayed Kazakhstan’s chairmanship. More broadly, while Kazakhstan’s contributions to international peace and security are widely recognized, criticism concerning human rights issues in the country continue to emerge both from partner governments, international organizations, and non-governmental bodies.

More in this category: « Uzbekistan's "System Reset" Japan as no “other”: Decolonizing Alternative for Central Asia? »
back to top