After Afghanistan: What is the future of U.S. policy in Central Asia?

The U.S. withdrawal and the Taliban takeover of Afghanistan should force American policymakers to rethink America’s position and goals in Central Asia. For years U.S. policy in Central Asia was subordinated to the goal of winning the war even though Washington never fashioned either a satisfactory definition of what winning meant or an Afghan government capable of standing on its own and acquiring the legitimacy and capacity it needed to survive. Despite a more regionally inclusive white paper by the Trump Administration, neither it nor its successor have been able to overcome the primacy of military factors in regional policy and the insufficiency of economic and political means to conduct a truly robust regional policy in Central Asia. 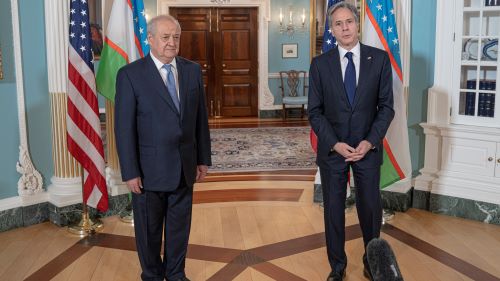 BACKGROUND: The failure to think seriously about the region as a whole and its component parts continues to afflict U.S. policy even as the Taliban were sweeping to victory. Secretary of State Antonyen stated that the U.S. was departing from Afghanistan in order to concentrate on meeting the China challenge. Implicit in these remarks is a failure to understand that a critical element of China’s challenges to the U.S. and international order take place in and due to Central Asian circumstances. For example, China’s policy in Xinjiang – which increasing numbers of analysts claim meet the threshold of genocide – cannot be understood without reference to Chinese policies in Central Asia and vice versa. Chinese as well as Russian and Taliban opposition to, and threats against, Central Asian governments potentially allowing the U.S. to save something from the wreckage of its policies by hosting U.S. bases has deterred those states from complying with Washington’s vain hopes for such an outcome. Indeed, the last-minute scramble for such bases as well as efforts to secure the flood of refugees also betrayed a lack of foresight. The overall poor planning and evidence of disarray, such as leaving Bagram Air Force Base secretly during the night, also reflect badly on Washington’s posture in Central Asia.

If the U.S. is serious about countering China, it must undertake a thorough rethinking of its interests, goals, and available policy instruments in Central Asia. The means for doing so are available if Washington understands what must be done. At the recent G-7 and EU summits the participants, including the U.S., announced their readiness to establish funding vehicles for global infrastructural investment to counter China’s Belt and Road Initiative (BRI). The EU has now begun that process. As numerous press reports now show, much of the hype surrounding the BRI has been exposed as exaggerated. China’s supposed largesse has been revealed to come along with serious problems, including the recipients’ risk of falling into debt traps that leads to sell-offs of key infrastructures in return for debt forgiveness, delays and contract failures by China, and jobs going to imported Chinese rather than native workers. Nevertheless, the BRI represents a powerful Chinese thrust, offering states across the world desperately needed investment that Central Asian states are in no position to refuse, especially in the absence of viable alternatives.

One major way Washington, especially if working in coordination with its European and Asian allies, can counter China’s hegemonic drive in Central Asia is to go beyond programmatic promises to put real sums of money behind effective, well-designed, and necessary programs across Central Asia. The U.S. government, along with private corporations and NGOs, are already carrying out investments and projects in economics, connectivity, infrastructure and environmental reconstruction – of particular importance in Central Asia – throughout the region. Indeed, some projects, for example the CASA-1000 electricity project, received large amounts of U.S. political and financial support. Nonetheless these have not been the priority instruments of U.S. policy or policymakers, who have been preoccupied with Afghanistan. The withdrawal from Afghanistan and impending transfer of state power to the Taliban should impel a reconsideration of the importance of countering China’s BRI with real programs that actually make a genuine contribution to socio-economic improvement.

IMPLICATIONS: Countering China successfully in areas where it is challenging international norms and order requires a much more generous policy – towards Africa and Asia generally and in this case Central Asia specifically. Survey evidence also shows that if the U.S. is not present, or perceived as being present in Central Asia, then its profile pales in contrast to China which is all too visible, even if negatively so, in the region.

To strengthen the U.S. and allied presence and positions in Central Asia it is necessary to formulate and execute a policy that goes beyond institutional fora like the 5+1 forum for foreign ministers, which is good but hardly enough, to a truly strategic vision that showcases American and Western competitive advantages in building successful long-term projects and partnerships with Central Asian societies, businesses, and governments in areas that are of vital interest to those audiences. The priority should be in healthcare, infrastructure, connectivity, and environmental reclamation, and be carried out in ways that enhances the agency of the recipients – not merely the profits and hegemony of the investor as in the Chinese case. For example, an initial step in this direction could be an expanded supply by the U.S. and its allies of vaccines and other vitally needed healthcare supplies, including doctors and nurses if possible, or even building clinics and hospitals to Central Asia.

Apart from a priority emphasis on solid socio-economic investments, we should encourage Central Asian governments to find regional solutions to regional problems. For example, the U.S. can use its convening power and the offer of economic assistance to Kyrgyzstan and Tajikistan, clearly the weakest links in Central Asia, to mediate their regional conflict. Such conflicts are by no means insoluble as the efforts of Uzbek President Shavkat Mirziyoyev vis-a-vis Tajikistan show. There is no reason why the leaders of those governments cannot move, with help and friendly persuasion, to improved ties leading to a peaceful, more cooperative bilateral relationship. Apart from helping to improve regional healthcare as suggested above, Washington and its allies could also launch initiatives to improve regional cooperation on a host of vital environmental issues that make a critical difference to people and societies in Central Asia.

While America’s defeat in Afghanistan marks the end of Western (including Russian) efforts to fashion a viable state and the rise of Asian actors – including Central Asian states – as models and patrons of what will likely be a new civil war, it does not mark the necessary end of a vigorous U.S. involvement with Central Asia. Indeed, this defeat should catalyze U.S. efforts to rethink Central Asia, grasp its growing importance in international affairs, and criticality to any effort to reduce the Russian and Chinese challenges to the West. This does not mean seeking bases but rather outcompeting those states on the basis of the comparative advantages of America and its allies in seeing through major projects to completion and making a profound difference on the ground to millions of people. This is not currently an area ripe for democracy but it could stand a good deal of liberalization and improved governance as well as enhanced regional cooperation. These benevolent outcomes can and should be fostered by powers like the U.S., which have everything to gain, as do the peoples and states of Central Asia from such processes.

CONCLUSIONS: The defeat in Afghanistan can become the springboard for a reconceptualization of what Central Asia needs, what its true and growing importance are about, and the opportunities for the U.S. and its allies to enhance their positions and influence in the area by means of a policy that privileges economic and political investment of direct benefit to Central Asia while also strengthening the region against the fallout of likely continued civil strife in Afghanistan. Russia’s efforts to bind the region through the Eurasian Economic Union and talk of a greater Eurasia have for a long time been exposed as cloaks for unilateral gain that provide little real benefit to the region.

Similarly, the BRI’s negative “externalities” in terms of costs associated with it, are becoming ever more visible and “Wolf Warrior” diplomacy will be no more availing in Central Asia than it has been anywhere else. Consequently, and despite the defeat in Afghanistan, the field is open to a systematic U.S. government rethinking of its past policies in Central Asia where Washington and its allies in Asia and Europe could contribute by playing to their advantages rather than abandoning the area as a result of the U.S. defeat in Afghanistan. Washington must avoid the mistakes of the past, not least the failure to think seriously about Central Asian realities. The outcome of such failures is manifest in Afghanistan where Washington’s activity has amounted to putting out fires that it should have foreseen. That kind of activity is the antithesis of sound policy. Yet out of these fires there can arise a better and more soundly conceived approach to the region.

Stephen Blank is a Senior Fellow with the Foreign Policy Institute.

More in this category: « Can Pakistan Offer the U.S. Military Bases to Target Islamic State in Afghanistan? Is Georgia at risk of losing its European perspective? »
back to top