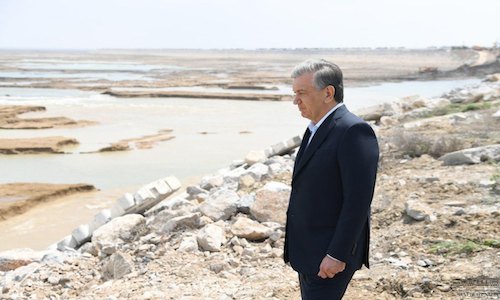 BACKGROUND: While Central Asian countries are experiencing hardship in the wake of the global COVID-19pandemic, they recently faced a new test of their regional capacity to manage problems and conflicts due to new incidents in their border areas, three of which deserve special attention.

First, the dam at the Sardoba water reservoir, which is located in Uzbekistan’s Syrdarya province bordering Southern Kazakhstan, was destroyed during a strong gale on May 1 and the water flow caused flooding in both Uzbekistan and Kazakhstan. This tragedy claimed victims and created great economic damage to both countries. Four people died, one disappeared, and many houses were destroyed. Rumors spread from Kazakh governmental agencies that the country would send the bill to Uzbekistan. However, this never happened and the two states resolved the problem in a peaceful and friendly way.

Second, in March, May and June, three incidents took place on the Kyrgyz-Tajik border. The events involved small armed skirmishes over portions of disputed land. From time to time, local village populations and border guards encounter each other on such lands, triggering irritation and clashes. However, local and central authorities from each side immediately interfered to settle the conflict.

Third, in the Sokh border area between Uzbekistan and Kyrgyzstan, a small clash occurred between local Kyrgyz and Uzbek communities over the small spring Chashma. Sokh is an exclave in Kyrgyzstan belonging to Uzbekistan. An 80-km-long road controlled by the Kyrgyz side connects Sokh with the Uzbek mainland, which is a source of resentmentamong of Sokh residents. The Sokh event was not simply a border issue but also highlighted the problem of enclaves,which is a legacy of the artificial partition of Central Asia into the five Soviet republics in the early 20th century.

IMPLICATIONS: Sporadic border incidents at several border areas between the Central Asian states have given rise to the argument that the region is conflict-prone and susceptible to border disputes. This seeming “new round” of such incidents could have strengthened this vision. However, the record of past and recent cases point out that they should be regarded in a different perspective.

Above all, none of these incidents escalated into dangerous and deadly conflicts or escalated outside the immediate problem zone. In fact, they lasted only a few days and were resolved peacefully. Although new flashes of border tensions and incidents remain a definite probability, there are also objective limits to their potential intensity and consequences.

In the wake of the Sardoba tragedy on the Uzbek-Kazakh border, Uzbekistan’s central and local provincial authorities immediately mobilized political, economic, diplomatic, financial and humanitarian resources to take all necessary measures in order to cope with the consequences of that tragedy. Despite rumors about a possible MFA note from Nur-Sultan to Tashkent, both states officially referred to the Treaty “On strategic partnership” (of 2013) and the Treaty “On Eternal Friendship” (of 1997) to effectively arrange communications. That was a very illustrative case of friendly and cooperative bilateral crisis management.

The situation giving rise to the Sokh incident on the Uzbek-Kyrgyz border, albeit seemingly more complicated and explosive, is in fact quite simple and easily solvable. On one hand, the conflict stems from the specific enclave status of Uzbekistan’s Sokh district located on Kyrgyzstan’s territory. This relatively unique case creates problems for local residents of the enclave related to their need for direct access to Uzbekistan’s mainland. Access only requires (re)opening the 80 km-long road that is blocked by the Kyrgyz side, allegedly because Kyrgyzstan is a member of the EAEU, but Uzbekistan is not.

This time, Uzbek authorities undertook unprecedented communication with the local population in Sokh: Uzbekistan’sPrime Minister visited the district and promised local residents to resolve the problem together with the Kyrgyz side.Similarly to the Sardoba case, Kyrgyz politicians made provocative statements, arguing that Kyrgyz will not give an inch of their land to Uzbeks, and that because Sokh is overpopulated Uzbekistan should relocate its residents to the mainland. These provocative and shortsighted statements contrasted with President Jeenbekov’s official statement confirming the friendly and brotherly relationship with Uzbekistan and a readiness to resolve the problem peacefully for the sake of future generations.

Like in the previous two cases, during the skirmishes on the Kyrgyz-Tajik border, political statements from the two states as well as from outside the region distorted the real state of the problem. Some low ranking hawks from both sides exchanged heated rhetoric, while Moscow offered mediation to resolve the border incident. However, both Bishkek and Dushanbe rejected this offer. It should be recalled that the First President of Uzbekistan, Islam Karimov, explicitly resisted any form of mediation by third powers in solving regional problems. This time, Kyrgyzstan’s andTajikistan’s respective leaders, Jeenbekov and Rakhmon, confirmed the same stance.

Border incidents like these recur with a certain frequency between Central Asian countries and highlight four important features of border problems in the region. First, incidents are limited in scale and dynamics and have only specific local/provincial, not nationwide, significance. Second, they are quickly addressed by local and central authorities of the states involved in order to keep the situation controlled. Third, although resentment and mutual accusations always appear among political groups and at the grass-root level, the highest political levels always manifest good will and do not express territorial claims. Fourth, whenever border incidents occur between Central Asian countries, Russia offers mediation, thereby causing perceptions or suspicions about its geopolitical intentions in the region.

The recent recurrence of border issues in Central Asia once again showed that these borders are arbitrarily drawn. Despite peaceful attitudes on the part of the central governments, local border area population painfully experience this problem, which requires innovative integrative solutions.

However, those who point to the seemingly fragile peace at the border areas often overlook that, first, most of the borderline segments are already delimited and only tiny segments still await completion. Second, all incidents were resolved quite quickly and never escalated. Third, there is explicit political will on the part of all Central Asian states to complete the border delimitation process successfully in accordance with the interests of these states. Conflicts have never required mediation from a third actor – particularly a great power. The conflicting sides have always been able to manage the crises on their own and quite efficiently.

Therefore, the task of overcoming the remnants of mistrust regarding border delimitation should be guided by the letter and spirit of the Treaties on Strategic Partnership, which are tested in such situations. The joint statement of the second Consultative Meeting of Central Asian presidents has a provision that says Central Asian states should jointly resolve actual regional problems [that is, on their own] by means of negotiations and consultations on the basis of consensus, equality and mutual respect. From this perspective, the upcoming third Consultative Meeting should build on the previous ones; it will once again be an occasion to express a good will approach to all regional issues, especially border issues, based on novel integrative arrangements.

More in this category: « ISIS Reaps Gains From the Pakistan-India Rivalry in Afghanistan The US-Taliban Deal and its Impact on Iran-Pakistan Relations »
back to top