An alliance formed around Prime Minister Nikol Pashinyan’s Civic Contract party won an overwhelming majority in the Yerevan city council elections, despite an ongoing smear campaign by media controlled by the Republican Party of Armenia (RPA), former president Robert Kocharyan, and their proxies. The election results substantiated Pashinyan’s determination to dissolve the National Assembly and to hold snap parliamentary elections in December. Despite the confrontational campaign by the RPA and its allies, and their attempts to discredit the government and obstruct investigations into the actions of several former officials, Pashinyan’s high popular support seems enough to advance his political agenda. 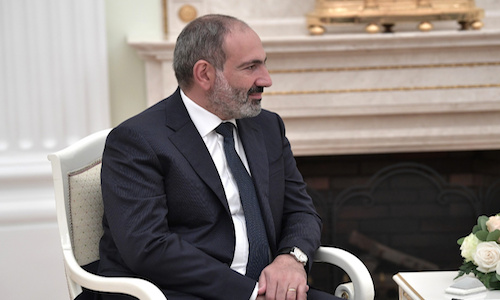 BACKGROUND: Within weeks after the “Velvet Revolution” and the election of its leader, Nikol Pashinyan, as Armenia’s new prime minister (see the 05/02/18 Issue of the CACI Analyst), the government became the target of a propaganda campaign by a number of media and social network users, with active participation of MPs from the formerly ruling RPA including former President Serzh Sargsyan’s staunchest supporters. Denouncements of new government members as “too young and inexperienced” were soon followed by allegations that they were “betraying national and family values” through “sponsorship of religious sects and the LGBT community,” as well as plans to legalize cannabis.

The disinformation campaign, using several media outlets and social networks, further intensified after the launch of a criminal investigation into the events of March 1, 2008, and indictments of several former officials. In 2008, police and army units attacked demonstrators after 12 days of mass protests in Yerevan following a contested presidential election, killing 10 people. Former President Robert Kocharyan, former Defense Minister Mikayel Harutyunyan, and former Deputy Minister of Defense General Yuri Khachaturov, are accused of violating the constitution and attempting to overthrow the constitutional order.

The fact that some members of government were formerly employed by Open Society Foundation–Armenia (OSF), frequently labeled the Soros Foundation, has become a recurrent propaganda topic. In particular, the campaign has drawn attention to a brother of the head of the Special Investigative Service, who has been employed by OSF. Moreover, allegations abound that the government plans to “sell Karabakh,” i.e. make unilateral concessions on the Nagorno-Karabakh issue. Similar assertions constituted powerful leverage in 1998, when then-Prime Minister Kocharyan and Serzh Sargsyan, then Minister of National Security, forced President Levon Ter-Petrossian to resign.

Pashinyan has continued to rely on popular support to advance his agenda, despite the increasingly visible resistance from the remaining RPA parliamentary majority. On August 17, Pashinyan’s 100th day in office, supporters once again held a rally, expressing their will to protect the results of the “Velvet Revolution.” They declared plans to speed up the adoption of amendments to the election code, and to dissolve parliament and hold snap elections.

IMPLICATIONS: Despite the propaganda efforts, Pashinyan’s popularity remains high. The My Move bloc formed around his party, Civic Contract, won an overwhelming majority (58 of 65 seats) in the Yerevan city council elections on September 23. The Prosperous Armenia Party won five seats and the remaining three seats went to the Luys alliance, formed by two parties that were allied with Civic Contract during the previous parliamentary elections in 2017. Although widespread vote buying has become customary in recent decades, only a few such incidents were reported this time. The police, acting upon appropriate orders, effectively prevented most of the attempts and Election Day was unusually calm, without bussing of voters, attempts to cast several ballots, and other familiar violations. During the run-up to the elections, in which the RPA chose not to participate, the Prosperous Armenia and ARF-Dashnaktsutyun (ARFD) parties, which joined the minority government in May, opposed Pashinyan’s declared political course.

While Pashinyan’s supporters considered the election results to reaffirm the need for snap parliamentary elections, RPA chose to embark on an open confrontation. After the city council elections, Prosperous Armenia and ARFD (the latter gained no seats) also adopted a rhetoric similar to that of RPA.

On October 2, Pashinyan announced that snap parliamentary elections would be held by December. The RPA faction, joined by Prosperous Armenia and ARFD, then managed to organize an extraordinary session of the National Assembly and adopt a resolution altering the procedural rules regarding snap elections in the event of the prime minister’s resignation. Thus, they attempted to prevent Pashinyan’s possible next move – resigning and using the popular movement to prevent the parliament from reaching quorum and appointing another prime minister, leading to its dissolution. In response, thousands of Pashinyan’s supporters took to the streets again, imposing a blockade of the parliament building. Pashinyan promptly fired ministers and governors representing Prosperous Armenia and ARFD, called on his supporters to allow parliament members to enter or leave the building, and started negotiations with the parliamentary factions.

It is quite clear that the “Velvet Revolution” was not aimed at former President Sargsyan personally, but at the oligarchy-dominated political system established by his predecessor Kocharyan and then fine-tuned and cemented by Sargsyan. Ostensibly, the pillars of that system – RPA, Prosperous Armenia, and ARFD – realized that their prospects would be limited in the case of snap elections. Moreover, as former top officials facing criminal charges appear ready to use their considerable financial and media resources for discrediting and destabilizing Pashinyan’s cabinet, the remnants of the old regime seemed determined to maintain their grip of the parliament and some other state institutions.

However, two days later Gagik Tsarukyan, Prosperous Armenia’s leader, broke the tactical alliance with RPA and hinted that he could support earlier elections “if that is the popular will.” On October 8, he signed a memorandum with Pashinyan, affirming the party’s support for elections in December. In turn, 20 parliament members from the RPA faction had personal meetings with First Deputy Prime Minister Ararat Mirzoyan and assured their support for earlier elections.

Pashinyan resigned on October 19, and as he suggested, the National Assembly did not appoint a prime minister on October 24. Meanwhile, on October 23 President Armen Sargsyan, after waiting for the maximum period of 21 days, said he would not sign the amendment adopted on October 2 and would send it to the Constitutional Court for review. Therefore, the amendment could not come into force in time to disrupt Pashinyan’s plan to dissolve the parliament.  On November 1, after voting the second time, a prime minister has not been appointed, so the parliament will be dissolved. Snap elections may take place in early December as Pashinyan suggested.

CONCLUSIONS: The RPA and their allies could be planning to avoid the dissolution of the National Assembly until May 8, 2019. From then on, the constitution would allow dismissing the prime minster through a vote of no confidence, which is not possible during the prime minister’s first year in office.  Pashinyan’s resignation and using popular support to dissolve the parliament have effectively prevented such a scenario. However, the government has not managed to persuade the departing RPA majority to vote for amendments to the electoral code; the second attempt on October 29 fell short of one vote. Not having a fully proportional system with a lower threshold, as was suggested by the proposed amendments, reduces smaller parties’ chances, so the RPA may hope to come second in the polls.

The next few weeks will likely determine whether Pashinyan’s cabinet will be able to leverage the unprecedented popular support for tackling the present crisis, securing the revolution’s outcomes, and finding a way to proceed with long-awaited reforms. A rather slow pace of progress has not so far undermined the government’s approval rating. There is a general understanding that despite prime minister’s sizeable powers, the absence of parliamentary support and the overwhelmingly hostile attitude of the parliamentary majority pose serious obstacles to attempts at changing the entrenched system. However, in the longer term, the absence of substantial improvements to the socio-economic situation may affect the government’s public approval.

Armen Grigoryan is a Visegrad visiting scholar at the Matej Bel University in Banska Bystrica, Slovakia. He teaches a graduate course on South Caucasus regional security.

More in this category: « Political Crisis is Looming in Ingushetia Volatile Migration Challenges Georgia's Visa-Free Travel to the EU »
back to top