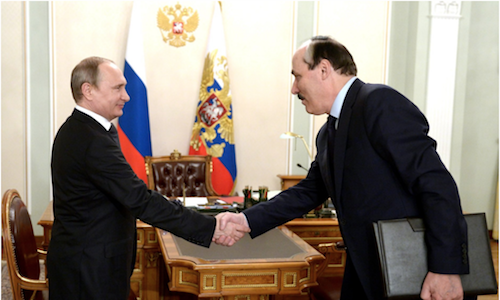 BACKGROUND: Abdulatipov, who was appointed head of Dagestan in 2013, from the outset positioned himself as a leader able to tackle the most pressing social and economic issues. Abdulatipov is of Dagestani/Avar descent but spent his adult life outside Dagestan. He therefore appeared to be the right candidate for this task, lacking strong ties with local clans, which would in theory allow him to find equilibrium between these groups. Abdulatipov sought to minimize the influence of powerful clans that informally control entire sectors of the economy and administration. As a result, the new governor alienated many influential local groups, which hindered important initiatives prepared by the republican government. These measures were accompanied with a crackdown on the shadow economy and corruption. During Abdulatipov’s tenure, local law enforcement authorities detained several prominent local politicians such as Makhachkala’s mayor Said Amirov or Andrey Vinogradov, head of Dagestan’s Kizlyar district. However, the fight against economic crime yielded few positive results and persons charged with corruption and embezzlement were rarely convicted.

It soon became clear that Abdulatipov’s authoritarian style of leadership and efforts to install a power vertical antagonized numerous groups Dagestan’s extremely diverse multi-ethnic population and added to tensions in the already volatile republic. The governor paid little attention to popular grievances and failed to adequately respond to the most impeding problems in the republic. During his tenure, Abdulatipov implemented two highly questionable administrative reforms, which were in line with federal standards of centralization and political uniformity, in a bid to neutralize the influence of clan networks and religious extremists. Contrary to initial intentions, these reforms did not improve the local system of governance but fueled the conflict between ethnic groups and caused additional strife, since some locals violently contested the position of the governor’s nominees.

The crackdown on Dagestan’s clanship turned out to be merely a window-dressing maneuver, because Abdulatipov quickly turned to traditional informal practices and promoted members of his own clan, predominantly fellow countrymen from Dagestan’s Tylaratin district. Moreover, some of Abdulatipov’s close associates have been involved in questionable activities. For example, the chief of the security unit in Dagestan’s parliament, Magomed Omarov, is currently one of the major suspects in a criminal case involving the abduction of a high ranking local official.

Abdulatipov proved unable to mitigate Dagestan’s persistent economic problems, a fact reflected in his plummeting popularity ratings. Dagestan’s economy is still chronically underperforming and the situation is exacerbated by austerity measures imposed by Moscow.  Yet Abdulatipov’s inability to effectively fight corruption and chronic mismanagement of federal subsidies appear to be the most important reasons for his replacement. Nevertheless, the former head of the republic is not solely responsible for the mistakes that marred his tenure. Some unfortunate decisions were directly imposed by Moscow, such as centralization of the republican power and economic austerity, which in turn negatively influenced the governor’s approval ratings and fueled additional conflict in Dagestan.

IMPLICATIONS: It took Moscow unexpectedly long to assign a new candidate for the governor post, but in early October Putin decided to nominate Vladimir Vasilyev as acting head of the republic. Vasilyev, 68, is an experienced politician with a background in law enforcement. He is a colonel-general of the police, who previously in his career commanded an operation against the Khachilayev brothers’ armed revolt in Dagestan and was part of the team overseeing the release of hostages during the terrorist attack against Dubrovka. Subsequently, Vasilyev has served as a deputy and later deputy Speaker of the State Duma, and Deputy Secretary of the Security Council.

Many experts regard Vasilyev’s appointment as a sign of Moscow’s deep distrust toward the republican elite. For the first time since the 1940s, the head of Dagenstan is not recruited from among Dagestan’s 14 titular nations and has no ties to local clans. The underlying rationale is to nominate a candidate capable of resisting pressure from local ethnic and clan networks, allowing the federal center to tighten control over Dagestan’s governance system in order to stabilize the volatile republic. Furthermore, Vasilyev’s professional expertise in fighting terrorism and economic crime indicates that Moscow prioritizes security issues and improving the management of funds allocated to the region. The economic downturn has severely impacted the financial situation in federal regions and Moscow has imposed tougher economic policies to tackle this issue, including a more decisive fight against economic crime. However, despite the crackdown on corruption and embezzlement of funds and federal subsidies, economic crime remains endemic in Dagestan. Moscow likely expects that a more experienced candidate without links to local interest groups will be better prepared to deal with this problem. Also, counterterrorism can soon become a renewed concern for both the republican government and the federal center since insurgents are likely to return to Russia after the military defeats suffered by the terrorist organization known as Islamic State in Iraq and Syria.

Vasilyev has already outlined his policy goals in Dagestan. The new governor will prioritize projects facilitating trade along the Caspian coast, aiming at economic revitalization of southern Dagestan. The rationale for launching these projects is not only economic. The region borders Azerbaijan and has attracted considerable investment from there, primarily concentrated in the city of Derbent where a sizeable Azerbaijani community lives. This has sparked resentment from the local Lezgin population, which has accused officials of favoring Azerbaijanis. The launch of new state-funded projects aim to balance Azerbaijan’s influence in the region and minimize conflicts among the local population. Vasilyev has also announced a new personnel policy based on personal accomplishments, rather than the traditional informal practice of only allowing members of the largest ethnic groups to hold the most important posts in the republic, barring persons of other ethnicity from acquiring these positions. The new governor has also asked the State Duma to increase subsidies for the republic and announced that he is ready to improve management of the funds.

CONCLUSIONS: So far, Vasilyev’s low-key leadership style, which is in stark contrast to his predecessor, and his willingness to conduct necessary reforms has won sympathy among local citizens. However, experts suggest that due to his age, Vasilyev might not serve the full term and could be replaced after the upcoming presidential elections. Therefore, many fear that the acting head of the republic will decide to prioritize counter terrorism measures and crack down on economic crime to ensure short-term stability without paying much attention to necessary reforms. Even if his appointment is temporary, the new governor’s political success will depend on how he manages to maneuver among Dagestan’s powerful clans and ethnicities and whether he can find a balance between the demands of local interest groups and the federal center.

More in this category: « Central Asian Terrorist Groups Join Jihad Against U.S. After Declaration of Jerusalem as Israel's Capital Pakistan in the SCO: Challenges and Prospects »
back to top