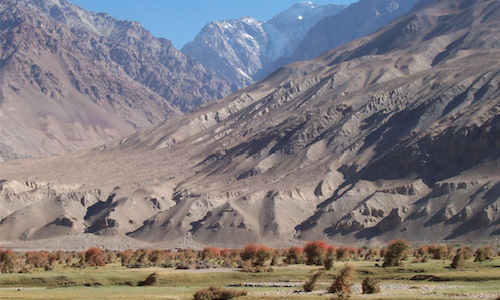 Background: China has shown and continues to show an increasing interest in Afghanistan (albeit still low compared to the West and Afghanistan’s other neighbors). One specific focal point of China is the northeastern Afghan province of Badakhshan that shares a very short (76 kilometers) and remote border with the Chinese autonomous region of Xinjiang. This interest stems from Chinese concerns about illicit cross-border movements, in particular of alleged Uyghur extremists affiliated with the East Turkestan Islamic Movement – a group that is said to want to establish Islamic rule in Xinjiang, the homeland of the Uyghurs.

Accordingly, China has increased its involvement in this specific border region. On August 4, 2016, the inauguration of the so-called Quadrilateral Cooperation and Coordination Mechanism stipulated a closer military co-operation between Afghanistan, Tajikistan, China and Pakistan; in September 2016 China signed an agreement with Tajikistan, pledging the construction of eleven outposts of different sizes and a training center for (Tajik) border guards along the Afghan-Tajik border; and during five days in late October 2016 China and Tajikistan reportedly held counterterrorism exercises in the Tajik part of the Wakhan Corridor – a narrow stretch of Afghan territory, wedged in between Tajikistan and Pakistan with the short border with China at its very end.

On the other hand, while China did announce certain examples of its deepening involvement in Afghanistan – for example, the first delivery of Chinese military aid to Afghanistan on July 3, 2016 – patrols with Chinese participation on Afghan soil in the Little Pamir were not publicly known until a media report broke the news on November 3, 2016. According to a Chinese official familiar with the issue, the report, which he termed misleading, resulted in the Afghan government’s suspension of the joint patrols by the end of 2016. (A media report published on November 30, 2016, implied that a spokesman of the Chinese Ministry of Defense had denied that such patrols were conducted; however, this was apparently a misinterpretation as the spokesman did not actually deny the patrols, but only said that “reports in foreign media of Chinese military vehicles patrolling inside Afghanistan do not accord with the facts” and added that “law enforcement bodies from China and Afghanistan, in accordance with a bilateral cooperation decision on strengthening border law enforcement, arranged to have joint law enforcement operations in border regions”).

In any event, it should be kept in mind that – given that the border patrols in the Little Pamir indeed included Chinese vehicles (as seen on photographs and confirmed by various sources) – such patrols must have been conducted via Tajikistan. This derives from the fact that the high plateau of the Little Pamir can only be reached by vehicle from Tajikistan, as mountains without roads block the access for vehicles from the Afghan and Chinese sides.

Implications: While the initial media report on patrols with Chinese vehicles on Afghan soil in the Little Pamir suggested that such an incursion might amount to a breach of international law, this is questionable.

The Chinese official familiar with the matter openly confirmed the existence of such patrols to this author several times. Something he would hardly have done if the patrols were not based on some kind of permission from the Afghan side. In this regard, he emphasized that the patrols were jointly conducted by Afghan, Tajik and Chinese forces based on a corresponding agreement between those nations, and were therefore legal. While the source could not produce the document referred to, as it is reportedly classified, he claimed that it is an accord between the border guard forces of the involved three countries that explicitly stipulates joint patrols. Such patrols had been conducted for around a year on a monthly, sometimes even weekly basis, until Afghanistan suspended them in late 2016, the source added. This was partly corroborated by an eyewitness account, stating that the patrols in the Little Pamir were conducted by Chinese and Afghan border guards (while there was no mention of Tajiks, it is possible that the eyewitness could discern the Chinese troops, but not differentiate between Afghan and Tajik border guards). The eyewitness report furthermore indicated that the Afghan Border Police stationed in the Little Pamir cooperated with Chinese troops, meaning that they apparently did not perceive the Chinese presence on Afghan territory as illegal.

Confronted with all the evidence, Sediq Sediqi, the spokesman of the Afghan Ministry of Interior Affairs, which is also responsible for the Afghan Border Police, nevertheless insisted that no Chinese troops had ever patrolled on Afghan soil in the Little Pamir. Sediqi conceded that there is indeed a border cooperation agreement between Afghanistan, Tajikistan and China, but staunchly asserted that such an agreement does not provide any basis for joint border patrols. Equally peculiar, a well-placed Tajik source could not confirm such joint border patrols.

Given that neither Sediqi nor other Afghan authorities gave more information on this matter, but that the overwhelming evidence leaves virtually no doubt that patrols involving Chinese vehicles and troops were indeed conducted, one can only speculate about the reasons for the Afghan denial. One possibility could be that the central government in Kabul was not aware of what happened in the very remote Little Pamir or that certain Afghan officials (local, regional or national) knew about the patrols and maybe even gave permission to the Chinese side, but did not properly notify other responsible Afghan authorities. And in case there has been an agreement on such patrols, it cannot be ruled out that such an agreement was not correctly concluded. However, this cannot be assessed due to the lack of information.

In any event, while this curious episode of Chinese troops in the Little Pamir might have some ramifications on Afghan-Sino relations, Afghanistan’s interest in Chinese aid as well as China’s focus on border security in the region will most likely limit its impact.

With respect to Chinese concerns about illicit cross-border activities on the Afghan-Chinese border, it should also be kept in mind that such concerns are highly exaggerated. The Afghan-Chinese border lies in extremely remote mountains and can only be crossed through two passes. However, both passes are located on altitudes of nearly 16,500 feet (5,000 meters) above the sea level and are hardly accessible – far away from any settlement with not even footpaths leading to them. Therefore, crossing the border illegally might be possible, but hardly usable as a corridor. Indirectly corroborating this, the Chinese source confirmed that the joint border patrols were conducted on the high plateau, far away from the actual border in the mountains, as those areas were simply too difficult to access.

Moreover, despite the frequent allegations that Uyghur extremists are present in Afghanistan, the Chinese government (as well as the Chinese source) has not presented even an estimated number of such Uyghurs, whereas various knowledgeable sources indicate that their presence in Afghanistan is likely insignificantly small. In addition, the same sources indicate that the Uyghur extremists that reside in Afghanistan probably migrated to the country a long time ago (most likely during the Taliban regime in the late 1990s), casting doubt both on their actual intention to return to China and, even if they would, their prospective influence and/or capabilities in Xinjiang.

Author’s bio: Franz J. Marty is a freelance journalist, currently based in Afghanistan. He covers a broad range of topics, but focuses on security and military issues. He can be followed @franzjmarty on twitter.

More in this category: « Advancing Georgian-U.S. security cooperation after the Trump transition Islamic State-inspired attacks continue in Chechnya »
back to top