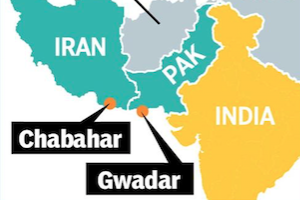 BACKGROUND: A string of recent events, including the lifting of international sanctions on Iran and Chinese President Xi Jinping’s visit to Tehran soon after, have provided Sino-Iranian economic relations with a shot in the arm. Relations between the two countries have hitherto been warm. China is Iran’s largest trade partner and its oil imports are the main energizer of the partnership. China continued to trade with Iran through the years when the latter was under international sanctions. This support through a difficult period has provided for a strong bond, which could provide the two countries with a robust foundation on which to build their deepening economic relationship in the post-sanctions era.

The Chinese president was the first international leader to visit Iran after the removal of trade restrictions on the country. During that visit, the two sides signed 17 documents and letters of intent, providing for deeper cooperation in energy, trade, infrastructure, etc. Importantly, the two countries agreed to increase their bilateral trade almost ten-fold to US$ 600 billion over the coming decade.

While Iran’s oil wealth will remain a major factor driving China’s interest in that country, Iran’s location along major trade routes linking China with Europe and West Asia, and its proximity to the Gulf of Oman will likely be a major additional motivation underlying Beijing’s engagement with Tehran in the coming decades, especially as China’s One Belt, One Road (OBOR) initiative gathers momentum.

Recently, the first freight train linking China and Iran pulled into Tehran station. Carrying cargo from the manufacturing hub of Yiwu in eastern China, the train completed its 10,399 kilometer-long journey to the Iranian capital in just 14 days. Had the cargo been shipped from Shanghai, which is located 300 kilometers north of Yiwu, it would have taken 45 days for the shipment to reach Iran’s Bandar Abbas port.

Such savings in time and cost that an overland rail route via Iran offers China’s trade with West Asia and Europe will prompt Beijing to extend the Yiwu-Tehran rail in different directions and to build more roads and rail links through Iran, adding to the existing network in the region. This could make Iran a major transit hub and trade corridor. Iran could provide China’s Xinjiang Autonomous Region with an alternate route – in addition to the China Pakistan Economic Corridor (CPEC) linking Gwadar port with Xinjiang – to the Arabian Sea and onward to markets and resources in West Asia and Africa.

IMPLICATIONS: As China looks for shorter, swifter and more economical ways to trade with the world, Iran has appeared on its radar as a valuable transit hub and trade corridor. This will prompt China to accelerate the construction of pipelines, roads, rails, power and port projects as well as economic and trade corridors to and through Iran.

While several countries are hoping to reap the benefits of Sino-Iranian economic relations, key regional powers are concerned. While China’s expanding presence in Iran bothers India, Pakistan is worried by Iran’s likely emergence as a more attractive trade corridor to China.

Like China, India’s engagement with Iran has been driven mainly by its interest in Iranian oil and gas. But increasingly, Iran’s value as an overland trade corridor for Indian goods heading to markets in Afghanistan and Central Asia – Pakistan has denied Indian trucks overland access to Afghanistan – is the reason for Iran’s rising significance in India’s foreign policy. This underlies India’s interest in developing Iran’s Chabahar port; it views Chabahar as its gateway to Iran, Afghanistan and Central Asia as well as to markets in Eurasia. In this context, China’s mounting presence in Iran is often seen negatively in India, as an obstacle in the way of India’s economic and other ambitions in the region.

Pakistan’s concerns stem from the competition that Iran poses to its own role as a trade and transit corridor linking China with the Arabian Sea. China’s development of Gwadar port and CPEC has the potential to bring Pakistan more business at Gwadar, earn it millions of dollars through transit fees and provide its economy with a much-needed boost. But will the development of Chabahar port eat into Pakistan’s business at Gwadar? Will Iran’s emergence as a trade and transit corridor undercut Pakistan’s role in the region?

The Chabahar and Gwadar ports sit 72 kilometers apart at the mouth of the Straits of Hormuz. Both enjoy enormous geostrategic and economic significance. Trade corridors linking these ports with China, Central Asia and Europe have the potential to transform economies.

Some argue that Gwadar offers more advantages. Development of this port is at least a decade ahead of Chabahar; international sanctions and India’s dithering on participation having delayed work on the latter. Besides, distances to Central Asian cities are shorter from Gwadar than Chabahar.

Yet corridors through Iran may be easier to put in place and more viable. Building CPEC’s roads and rail is a major engineering challenge as they have to cross mountainous terrain. In the case of Iran however, much of the infrastructure is already in place and needs only to be modernized. More importantly; unlike CPEC, which runs through an unstable Pakistan and its volatile Baluchistan and Khyber-Pakhtunkhwa provinces, routes via Iran promise more security.

The poor security situation has stoked fears in Pakistan that China’s commitment to Gwadar and CPEC could dwindle as Iran’s trade corridors take shape and if Pakistan’s government fails to address China’s security concerns.

CONCLUSIONS: Given the “all-weather friendship” between China and Pakistan, fears of China “abandoning” Pakistan in favor of Iran seem exaggerated. China’s development of trade corridors to and through Iran is more about the need to have multiple routes to the Gulf of Oman than being the outcome of losing patience with Pakistan.

Much of the discussion on Gwadar and Chabahar ports and the corridors linking them to trade routes has tended to put issues in an either/or, zero sum framework, as if the gains made by Iran should mean losses for Pakistan and vice versa. This need not be so. Corridors running through Pakistan and Iran are complementary rather than conflicting or even competing. They all fit into a larger network of roads, rails and pipelines that will benefit China, but also the rest of the region. Therefore, China’s building of roads, rail and pipelines in Iran, for instance, would certainly benefit Iran and China, but also Pakistan and India as well.

AUTHOR’S BIO: Dr. Sudha Ramachandran is an independent researcher / journalist based in India. She writes on South Asian political and security issues. Her articles have been published in Asia Times Online, The Diplomat, China Brief, etc. She can be contacted at This email address is being protected from spambots. You need JavaScript enabled to view it. .

Image Attribution: www.hindustantimes.com, accessed on May 26, 2016